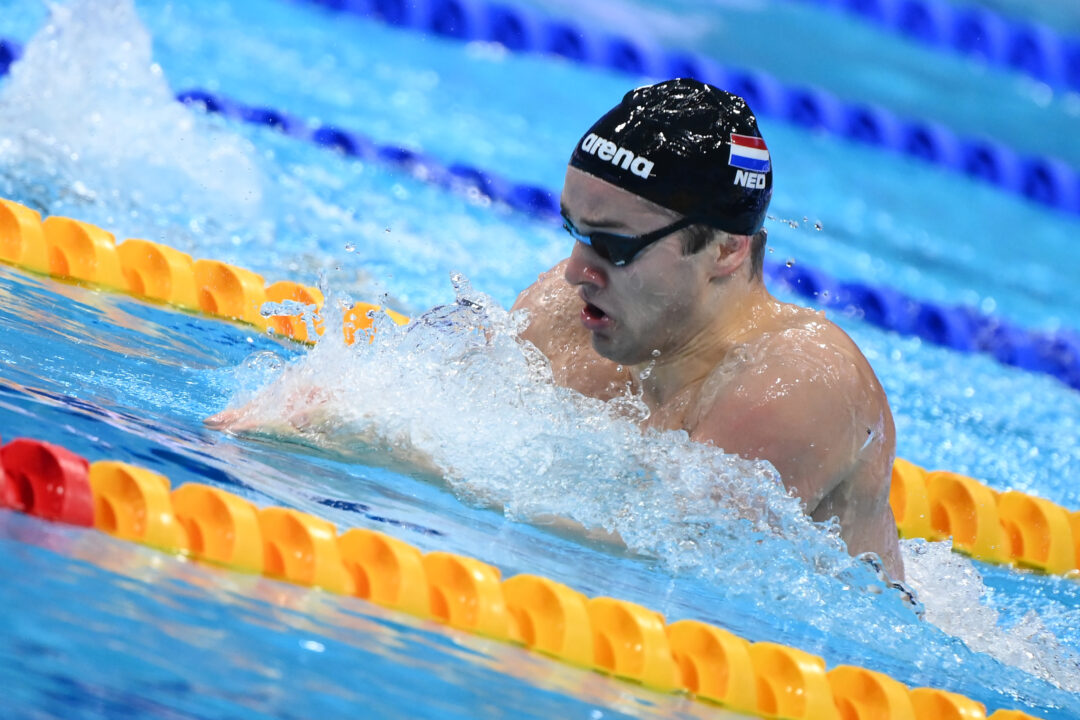 Many of the swimmers we saw competing at the European Championships in Budapest are back in the pool in Monaco, including Katinka Hosszu, Yuliya Efimova and Charlotte Bonnet.

Arno Kamminga will kick off this evening’s action in Monaco in the 200m breaststroke as he leads the field with a morning swim time of 2:12.18.

Hungary’s Iron Lady raced the 200 free, 200 back and 100 fly earlier in the day and maintains her reputation as one of the swimmers with the most stacked schedules.

As expected, Kamminga stormed to a comfortable win in this event with a time of 2:10.39. The 24-year-old clocked a time of 2:07.35 while racing in Budapest last week which earned him a silver medal there. His lifetime best stands at 2:06.85 which he set while racing in Rotterdam last December.

Third place went to fellow Dutchman Arjan Knipping who stopped the clock in 2:15.00. Knipping is a medley specialist and holds the Dutch national records in the 200 and 400 medley.

The Russian breaststroke specialist was a full second ahead of Mexico’s Byanca Rodriguez Villanueva who holds a personal best time of 1:07.74 from the 2019 Pan American Games.

Finland’s breaststroke strength is largely contributed to by Jenna Laukkanen who finished in 3rd spot here.

A splash and dash men’s 100 free saw Maxime Grousset being the only man to break the 49-second mark and win the event in a time of 48.28. Grousset came extremely close to dipping under that mark this morning but was just off with 49.04.

He easily took the win here as his nearest competitor was more than a second behind with 49.44 – that time clocked by fellow Frenchman Charles Rihoux.

Trinidad & Tobago’s Dylan Carter took the third spot (49.98), completing the top three finishers and the list of men who broke the 50-second mark.

The tightly contested race we expected in the women’s 200 free was not to be as the Frenchwoman, Charlotte Bonnet, was in a league of her own. The freestyle specialist clocked a time of 1:58.38, finishing almost two seconds ahead of her nearest competitor Katinka Hosszu.

Hosszu, who had a heavy three-event schedule today, was off her prelims time of 1:59.7- here with 2:00.12. She did, however, do enough to hold off her Hungarian teammate Evelyn Verraszto who touched behind her in 2:00.56.

After cruising this morning’s prelims swim, Chad le Clos turned up the heat here in the 200 fly – winning the event in 1:56.88.

The Olympic gold medallist had a tough contest from Kregor Zirk, the Estonian swimmers touching just behind him in 1:57.45 and improving on his prelims time of 2:00.34.

The podium finishes were completed by Logan Fontaine who clocked 2:02.02 The youngster shaved 0.06 off his former personal best in doing so.

Not long after swimming the 200 free, Hosszu was back on top in the 100 fly with a winning time of 1:00.62. That takes down her morning time by almost a second.

Frenchwoman and first seed heading into the final Mika Heideyer also dipped under the 61-second mark with her time of 1:00.91. Completing the 1-2-3 finishers was Laura Lahtinen of Finland (1:01.08).

Yohann Ndoya Brouard won the men’s 100 back in comfortable fashion here and bested his prelims time of 55.29 by almost two seconds in the process.

The 20-year-old is fresh from winning a bronze medal in this event in Budapest which he did tied with Greece’s Apostolos Christou in 52.97. He got down close to that time here with 53.53.

Behind him was Omar Pinzon of Colombia with 54.76 who easily took second place ahead of Ladislas Salczer (56.65).

Frenchwoman Fantine Lesaffre showed her class in this event, winning in 2:14.99. She was well ahead of the rest of the field, pushing hard on the 3rd 50 and backing it up with a strong second 100 meters.

Celia Pulido Ortiz held the pace for the first 100 and ultimately finished second behind Lesaffre in 2:18.71. She just edged out Louise Lefebvre who touched in 2:18.86.

A four-man final in the men’s 200 IM saw Jeremy Desplanches taking the win in 1:58.46. The Swiss swimmer recently won a silver medal in this event while racing in Budapest at the European Championships.

Though he was roughly two seconds off his silver medal-winning time here, he took a chunk of his earlier prelims time of 2:01.73.

Behind him was Dutchman Arjan Knipping who earlier raced the 200 breast. He improved on his third-place finish in that event to finish second here with 2:01.08. Third went to Teemu Vuorela in 2:05.47.

Grousset is programed for Paris 2024 but it would be cool to see him make the olympic final already this year and take much experience.

Grousset shaved .4 of his previous PB in budapest with a 47.9. A bronze in Tokyo is not impossible.

First time since I follow swimming that our French championships will be held in a US-like mode very close to the big meet of the summer. Because of Covid it will be held from June 15 to June 20 in Chartres. Usually it’s held in April. I have no idea whether it will benefit our swimmers or not at olympic games. Hopefully it works as well as for US swimmers! The big difference is that US coaches and swimmers are used to that schedule and are used to that double taper. It’s entirely new here in France. But I guarantee you that if it’s successful then it will be the new norm forever.

But most of the French team has been picked already!?!?!

Yeah the real one!
I was a little bit busy the last few months and I’ve not followed the sport as much as I used to do it. I’m trying to catch up a little bit and get back on track for the summer.

We were all anticipating your comments, especially re: Destin Lasco’s performance in the small pool at the NCAA’s.

Can confirm that this is the real Bobo Gigi.

while i want it to be him im always a little skeptic these days,
since back in the day his english was a bit broken and he just articulated differently i feel like.

I know it’s a training meet for a lot of swimmers there but the winning time in the women’s 100 fly is very very very slow. Come on, 1.00.62 for a Mare Nostrum meet….

that and the lack of notable names in the event. sjostrom, who has regularly been on this tour in the past, is missing from the lineup for obvious reasons. she’s been a great in season swimmer and probably would have gone 56 here if she wasn’t injured

Very tidy 400fr from the Tunisian teenager Hafnaoui. Anybody know much about him? Looks to have a nice stroke.

Yes ouch, but it was her third event that session, mind you, so let’s give her a break. Kliment Kolesnikov couldn’t do it recently with the 1 FR / 1Back double (https://www.newslocker.com/en-uk/sport/swimming/kolesnikov-on-100freeback-double-im-not-a-robot-or-michael-phelps/view/)

Yeah risking to sound a total a-hole… but a very pedestrian meet, not like previous mare nostrums #damncovid19

Covid is just part. Europeans were last weekend. Americans, Canadians and Australians all normally support this circuit to some degree but have their Trials soon. Japanese aren’t allowed to travel with their spike. Add all this up, and you get a smaller and slower meet. It should be back to normal next year.

🥱 Someone wake me up when the fast swimming starts 😴

There are many fast meets this week, there’ll be some quick times in sure

The “results” page shows the prelim race in W400IM with only two participants. Should we expect the final race where it would be only one swimmer. Or there was only one race planned in this event, which Hosszu won with 4:38.36 time.
I think that all other races of Hosszu today were just warm-up preparation for this particular one race.