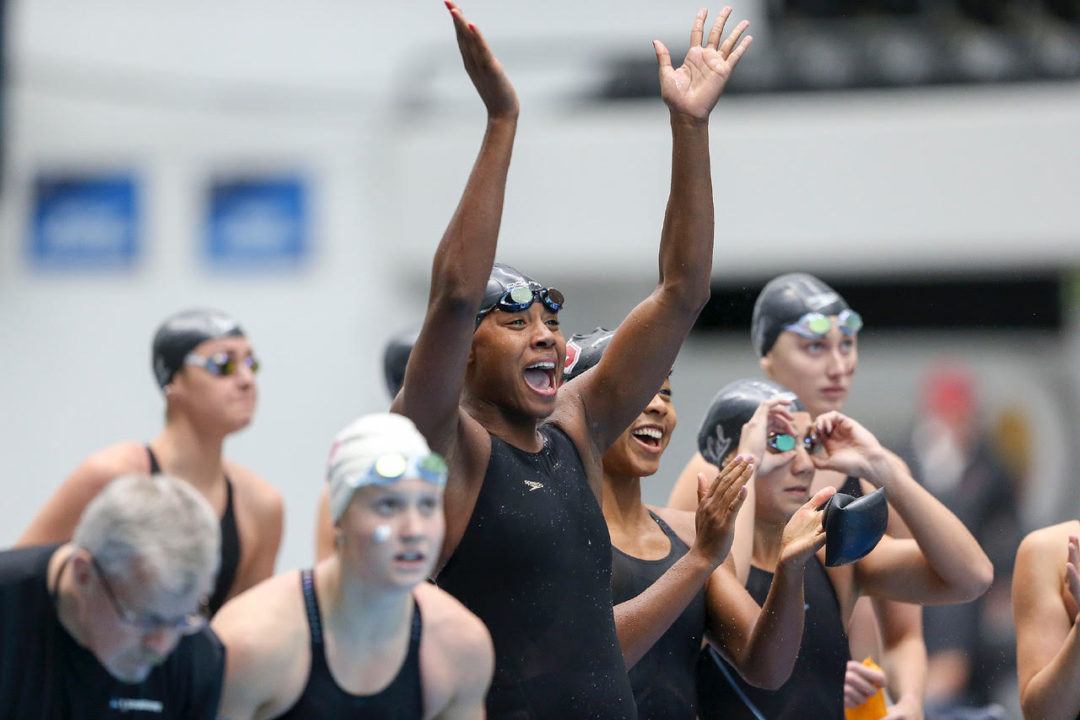 The Stanford swimmers are two-for-two for American records in their relay swims after putting up 1:26.15 in prelims of the 200 free relay this morning to take down Arizona's 2009 suit-era mark. Current photo via Tim Binning/TheSwimPictures.com

The women of Stanford are two-for-two with American record swims. This morning, Simone Manuel, Lia Neal, Janet Hu, and Ally Howe put together a 1:26.15 to outswim the record by .05 to add another big swim to their 800 free relay mark last night. This morning’s swim was also an NCAA, Championship, and U.S. Open Record.

You can see their splits below:

Neal was the second-fastest flying-start swimmer in the field, after Zhesi Li of Ohio State, who was 21.19. Manuel’s flat-start 21.44 was second only to Olivia Smoliga of Georgia’s flat-start 21.43.

The previous record was set by Arizona back in suit-era 2009. At the 2009 NCAA Championships, Lara Jackson, Lindsey Kelly, Justine Schluntz, and Taylor Baughman came together for 1:26.20.

The swim outdid second-fastest Cal’s Farida Osman, Amy Bilquist, Valerie Hull, and Kristen Vredeveld by over half a second (1:26.67). However, Cal hasn’t pulled out all the stops yet. They have 6 swimmers who have split 21 before this meet, so they are likely going to mix up their relay before tonight. We still haven’t seen Abbey Weitzeil in action, so tonight could still be a tight race between the two teams out of California.

Neal would’ve had the third fastest flying start also behind Comerford (:21.27)……feeling a GREAT meet for her!

How come there are prelims for the 200 free relay when last night I think they just did finals for the 800 free relay?

Not exactly sure what your question is. The 800 free has traditionally been finals-only at NCAAs, while all the other relays are prelims-finals. The reason many conferences meets now have the 200 Medley or 200 free on the first day with the 800 free is that they don’t bother doing prelims/finals for relays

Thanks for the reply. I was just wondering why this relay has traditionally been finals-only while the others follow a prelims-final format.

Because it used to be the same day as the 200 free, and swimming 4 200 frees on one day is significantly more stressful than 4 50 frees, I would imagine.

Good swims for Li and Neal. Exciting meet so far.