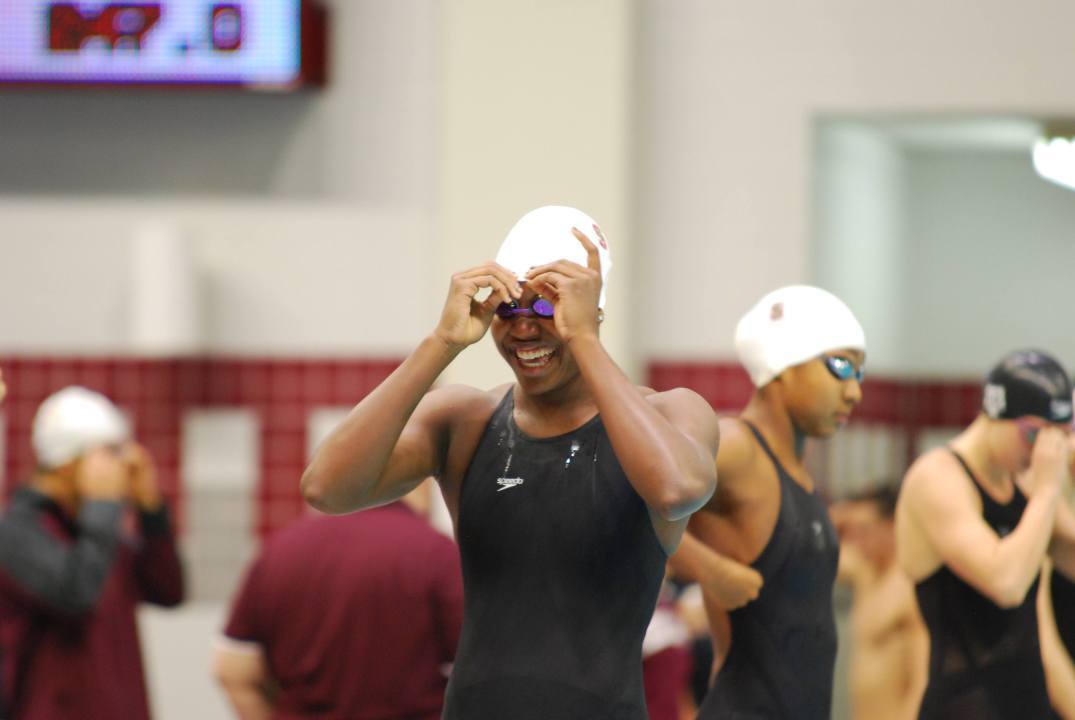 Simone Manuel stole the show, but the A&M women took the title at the 2014 Art Adamson Invitational. Current photo via Janna Schulze/SwimSwam.com

Stanford’s Simone Manuel rounded out her show from the 2014 Art Adamson Invitational at the Texas A&M Rec Center in College Station, Texas on Saturday by setting a new American Record in the women’s 100 free.

Despite only being a mid-season meet, Manuel had one of the greatest sprint performances that we’ve ever seen in yards swimming.

The totality of her finals performances, all freestyle:

This meet was littered with impressive performances, though, and that includes the finals session.

Sarah Henry started the day off with a 16:02.93 to win the women’s 1650 free running-away; Arizona State’s Anna Olasz took 2nd in 16:21.21. It’s interesting that Stanford’s highest placer in this race was only in 7th place with a 16:48.12, highlighting the biggest weakness for this team: the distance freestyles. That will be a weakness at least until Katie Ledecky, the greatest distance swimmer ever, arrives on campus, but for now it is a hole in an otherwise loaded lineup.

Henry’s swim, on the other hand, was ten seconds faster than she was at this same meet last season.

Stanford’s men have no such issue in their distance group, and they took the top three spots on the men’s side. That was led by junior Danny Thomson in 15:06.40. That’s just off of what will likely qualify for NCAA’s, but is right in the range of what he swam last year (about two seconds faster) mid-season, albeit under much better conditions than the UNLV Invite was.

Coming off of the final turn, Brandt put in a fantastic underwater, but Bratton was too good above it to be denied. That was a lifetime best for Brandt, however, by 1.7 seconds in the runner-up effort, and based on history should qualify both swimmers for the NCAA Championships.

David Nolan just missed the NCAA Automatic Qualifying mark in the men’s 200 yard backstroke, but nobody came close to him after the first 100 yards as he sailed to a 1:41.03 win. That will easily qualify him for NCAA’s and allow Stanford some flexibility at season’s end.

Texas A&M freshman Brock Bonetti looks like he’s going to be the spark that this Texas A&M backstroke group has been looking for; he was a 1:44.85 for 4th place, which already puts him 5th in A&M’s all-time rankings.

This was the race that everyone was waiting for since her electric 45.81 relay split earlier in the week, and while Simone Manuel missed breaking Arianna Vanderpool-Wallace’s all-time best time of 46.61, she did break her own American Record with a 46.62 in finals. (Read more about that record here).

Lost in the fervor of Manuel’s record was her teammate Lia Neal taking 2nd in 48.12 and Maddy Schaefer coming in 4th in 48.55. With three swimmers that fast, plus Janet Hu who is almost as good, the American Record (as the team demonstrated later in the session) seems as good-as-gone if the Cardinal swim as well at NCAA’s this year as they did last year. What’s more exciting is that while Schaefer graduates, the other three of those are sophomores-or-younger.

Out of the B-Final, Aggie French freshman Beryl Gastaldello swam a 48.46. When the team gets the services of Lili Ibanez back, they’ll be in fantastic shape with a top-5 worthy 400 free relay at NCAA’s, at least.

The Stanford men, still trying to figure out where their sprint relays are going to be filled from, got a couple of pleasant surprises in the men’s 100 free final. The first was senior Thomas Stephens swimming a 43.66 – his best-ever flat-start by four tenths of a second. He’s a big key to Stanford’s season, and so far, that’s a key that fits.

Sophomore Connor Black had a nice 43.81 for 2nd, and New-Zealand-native freshman Sam Perry put in a 44.22 for 3rd place. If Stephens and Perry can progress a little further by the time NCAA’s rolls around, Stanford will be in much better shape in those sprint relays.

Texas A&M freshman Bethany Galat pulled off a little bit of an upset in the women’s 200 breaststroke, swimming a 2:09.02 to beat her teammate Ashley McGregor (2:09.17). McGregor was 5th at NCAA’s last year, and held a small lead until the last 50 yards.

Stanford’s Max Williamson swam a 1:56.98 to win the men’s 200 breaststroke, using his powerful kick to split 30.22 on the last 50 yards. He was at-or-near the lead for this whole race, but it was that last 50 that took him to what wound up being a relatively comfortable win.

Stanford’s Gray Umbach was on A-Standard pace through 150 yards of the men’s 200 fly, and while he lost that touch over the last 20 yards of this race, his 1:43.20 should still be good enough to earn him an invite to Iowa City.

Had Simone Manuel been able to repeat her 400 medley heroics, the Stanford women would have easily broken the American Record in the 400 free relay. As it were, Manuel split (only?) a 46.38 on the relay’s final leg, and the team was a 3:10.77 – just about a tenth off of the record.

Having a relay with nobody slower than 48.50 is tough enough in March, but for the defending NCAA Champions in this event, being able to throw in a 46-low or 45-high on the anchor make this a relay that appears almost unbeatable. The only team that, on paper, has the weapons to do it is a fully-focused Cal team.

The AM women took 2nd in 3:15.44 – which also secures their relay fate for the spring as an NCAA Qualification Time. The swim included a 48.33 anchor from the freshman Gastadello, and that’s a relay that gets better with Lili Ibanez.

The Boise State women, with four underclassmen (one freshman, two sophomores, and a junior) were impressive for 3rd in 3:18.17. Sam Wicks anchored for them in 48.91.

The Stanford men put their sprinters to good use, and with David Nolan leading off in 43.15 combined for a 2:53.01 – also an NCAA Qualification Time in the 400 free relay.

What was most exciting was that their B-relay wasn’t much slower, swimming 2:55.84 for 2nd. They could have improved another four-tenths by swapping Perry onto the A-relay, and Stanford now has options for these sprint relays.

Even with Simone Manuel making big waves, the A&M women were able to defend home turf with 1204.50 points, beating out Stanford 1137.50.

On the men’s side, there was little contest for Stanford, as they almost tripled second-place LSU.

16.48.12 for the first Stanford girl in the mile. Wow, it will be night and day with the 4 next college seasons. I’m sure Katie Ledecky can swim at least 1 minute faster even after a 120 000 yard-training session.
The Cardinal are too weak in the 500 free and the 1650 free to have any chance of winning the NCAA championships this season?

I haven’t been able to follow how Georgia has been performing this season, but I think stanford women have a solid chance at a title. I think this invite favored A&M women points wise. Simone Manuel is a beast and she’ll really help stanford women win relays. Hope to see some great racing between Georgia and Cal women in about a week and a half.

Stanford didn’t care about the points title. Manuel made the A final in the 100 fly–and then threw away a guaranteed 11 points by scratching so she could swim a faster time in another event she was going to win anyway. They could have scored more points in the relays if they spread their top swimmers instead of loading their A group.

After dropping the 200 IM and then skipping the 100 fly final it looks like Manuel might swim only freestyle in the NCAAs. Without focusing on the 500, Manuel is so good at 200 that she might very well be able to make the A final at NCAA, at which point she could just swim the final… Read more »