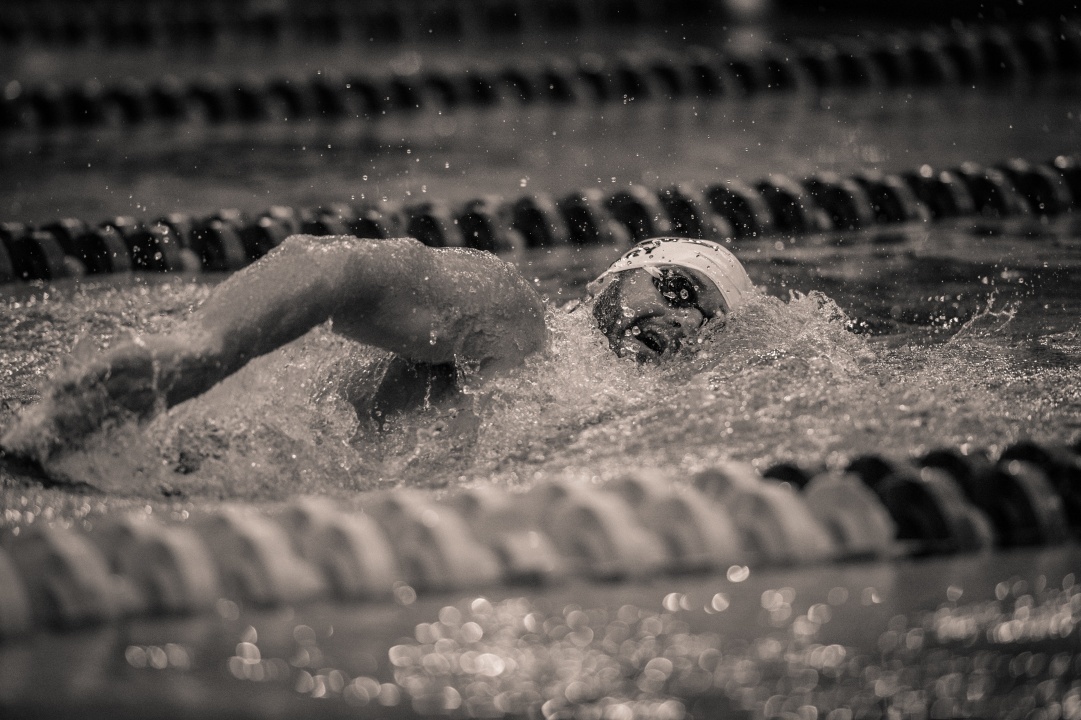 Tyler Clary is the top seed in the men's 200 IM in Day Three finals at Arena Grand Prix at Minneapolis.

American record-holder Nathan Adrian clocked an astounding 18.83 to win the 50 free final on Day Two of the Minneapolis Grand Prix.

With Arena Grand Prix series points on the line, Elizabeth Beisel, a name you wouldn’t normally associate with distance swimming, was standing in front of lane 5 at the beginning of the women’s 1650. To her right was top-seeded Becca Mann of North Baltimore. The top time to beat from the morning heats belonged to Minnesota freshman Brooke Lorentzen, 16:25.72.

Gabrielle Kopenski of Frisco led the beginning of the race out of lane 7, but the three middle lanes (Beisel, Mann and Kiera Janzen) started to take over at the midway point. At the 1100 turn it was Janzen, Beisel, and Mann across the middle. By the 1150 Beisel had moved ahead of her two neighbors and began to build her lead.

Maya DiRado of Stanford Swimming got things going in the A-final, taking it out with her strong fly/back combination in under 54 seconds. Caitlin Leverenz of California Aquatics took over the lead with breaststroke. Melanie Margalis of Saint Petersburg and Karlee Bispo both tried to chase down Leverenz. They nearly caught her but in the end it was Leverenz with 1:55.02, followed by Margalis (1:55.19), Bispo (1:55.31), and DiRado (1:55.65).

North Baltimore’s Alpkan Ornek won an exciting B-final over Daniel Conway of Purdue, 1:48.70 to 1:48.83. The championship final featured an excellent race between NY Athletic Club’s Darian Townsend and North Baltimore’s Conor Dwyer. Tyler Clary had scratched to focus on the next race, the 200 back. Townsend was out first, making the back-to-breast turn a whole second ahead of Dwyer. The breaststroke proved to be the equalizer, though, as Dwyer nearly caught Townsend. The two battled it out for home, with Townsend’s early lead proving too much to overcome. He won 1:43.99 to 1:44.24.

Katie McLaughlin of Mission Viejo, who dropped 4.3 seconds off her seed time in prelims, shed another 2 seconds to take the B-final in 1:57.76. Tevyn Waddell of Mitchell went 1:58.99; Denver Swim Academy’s Annie Ochitwa was 1:59.17.

The A-final looked like it might be another Elizabeth Beisel win, but Dominique Bouchard of Oakville had other plans. She was out fast and then closed it down with a strong finish, clocking a very rapid 1:51.02. Beisel took second in 1:52.37. Megan Romano of Athens Bulldogs finished third in 1:53.41. Like McLaughlin, she took another 2 seconds off her morning time, which was already her best by a good margin.

The B-final of the men’s 200 back proved to be one of the more exciting races of the night. Minnesota’s Christopher Johnson was leading Alex Walton of Iowa City Eels in a tight race. Johnson had the edge through the 150, but Walton took over at the last wall. With 25 to go the two dug in and battled for the wall. Johnson got the win in 1:47.24; Walton went 1:47.54. Minnesota’s Jack Tribble was 1:48.86 for third in the heat.

In an impressive double, Katie McLaughlin of Mission Viejo took off like a shot and won the B-final of the 100 free in 48.32. That’s a lifetime best by 1.2 seconds. Behind her were Beata Nelson of Southwest (49.29) and Denver’s Annie Ochitwa (49.46).

Bruno Fratus led off the men’s 100 free with an impressive 42.55 win in the B-final. The closest finisher was Frank Dyer from North Baltimore, in 44.29.

In a somewhat reminiscent performance from last night’s 50 free, Nathan Adrian shot off the block and took the lead quickly from lane 2. He was 19.69 at the 50, 30.6 at the 75, and 41.49 at the finish, for an absolutely terrific swim for this time of the year.

There’s Club Wolverine’s Connor Jaeger and there’s everyone else.

Santa Clara’s Michael Messner had been 15:35.75 in the morning heats, setting the bar for the A-finalists. Jaeger led the field early on and just kept building his lead as he went. He was up by 2 seconds at the 500 and more than 8 at the 1000. Jaeger showed Minneapolis why he is known as a strong finisher: he negative split his 800s then came home in 25.0 over the last 50 for a final 14:43.35.

Nathan Adrian drops no time when he is shaved and tapered. He swims incredibly fast in season and has been going these 41 mids and 18 high 50’s for 5 years. Still fast-but is he actually getting faster?

On the women’s side I pick Beata Nelson’s 100 fly.

Impressive 48.32 for the young McLaughlin in the 100 free B-Final.
She crushed her PB! And just a few minutes after swimming the 200 back.
She isn’t only a fly swimmer.

Ryan Harty is a great young talent.
Interesting to watch him against Tyler Clary.