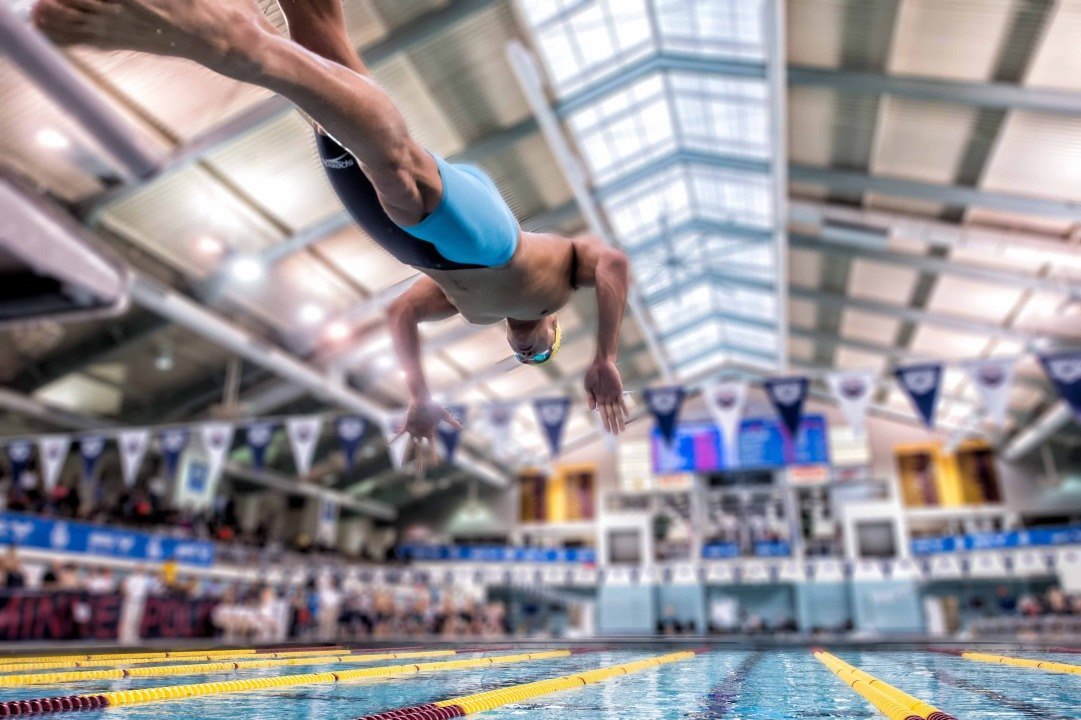 In a great start to the evening’s races, Tori Simenec, Kelsey Drake and Ruby Martin in lanes 3, 4 and 5 put on quite a show. Drake was out first, turning in 56.3 with Martin right on her heels. Simenec began her charge at the 150 and put pressure on the leaders. Martin looked like she was answering, but Simenec slipped in to the wall first, winning the B-final in 1:57.46 to Martin’s 1:57.58. Drake was 2:00.35.

The A-final produced an even more stunning finish. Elizabeth Beisel was out in 55.1 with Caitlin Leverenz right behind her in 55.5. Katie McLaughlin was another 2/10 back but right in the chase. Maya DiRado moved up on the leaders at the 150 from out in lane 7, and all four of them raced for home. Leverenz clocked a 1:54:34 to win; Di Rado finished second in 1:54.97; and a hard-charging McLaughlin tied with Beisel for third in 1:55.15.

Tyler Clary led the A-final from start to finish, winning in 1:44.73. Usually the strongest back-halfer, he took it out first this time and held on. Kyler VanSwol matched Clary’s second half but finished just behind, going 1:45.35. Third place went to Guillermo Blanco in 1:45.53.

In terrific double, Katie McLaughlin was back in the B-final of the 50 free, where she stunned the field with a 22.82 victory. Rhi Jeffrey in lane 4 finished second with 22.86, and Blake Zeiger was third in 22.98.

Margo Geer, the fourth-fastest of all time in the event, went out like a rocket and left no doubt as to who would win the event. She touched in 21.94, the only sub-22 sprinter in the field. Karlee Bispo came in second from way out in lane 1; she went 22.46 while Zoe Avestruz took third in 22.48.

The B-final of the men’s 50 free went to Darian Townsend, who kept a slight lead over the field the entire time, in 20.02. Marcus Schlesinger got to the wall just in front of En-wei Hu-Van Wright, 20.32.

And then came the fireworks.

American record-holder Nathan Adrian just crushed it with an 18.83, seemingly miles ahead of everyone else. Bruno Fratus touched in 19.33, exactly a half-second back, while Miguel Ortiz picked up the bronze in 19.42.

A lot of familiar names were back for yet another final when the 100 back took to the water. Katie McLaughlin and Maya DiRado opposed each other once again, but this time DiRado took control early on and continued to build her lead, finishing with a smooth 53.16. Marie-Pier Couillard took second in 54.00, and Katie Hoff picked up a third in 54.47.

The championship final was all Beata Nelson, though. After her NAG last night in the 100 fly, and the way she went out in the 100 back tonight, it looked like we might have another record to celebrate. And while she went a best time –her first sub-52 performance– she fell just short of Rachel Bootsma’s 15-16 NAG with her 51.67 victory. Dominique Bouchard was second in 52.33 and Zoe Avestruz, third, with 52.82.

Club Wolverine’s Junya Koga had an explosive swim in the championship final of the men’s 100 back. He went 44.86 and won by well over a body length. Teammate Miguel Ortiz was second with 45.94. Badger’s James Wells rounded out the podium in 46.19.

Gabrielle Kopenski, the 14-year-old from Frisco Aquatics, who dropped about 7 seconds between prelims and finals, won the consolation of the 500 free with 4:42.61. Jessica Plant of Minnesota came in second at 4:44.65; Sandra Soe out of Santa Clara went 4:47.08.

Elizabeth Beisel led the championship final from start to finish, but there was a lot of jockeying going on for second place as Shannon Vreeland, Lindsay Vrooman and Brooke Zeiger all took turns making a run at it. Beisel touched in 4:37.00, a five-second improvement from her prelims time and only 2.5 off her seed time. Beisel has had some excellent mid-season swims at this meet. Minnesota freshman Zeiger had the strongest back half and wound up second in 4:39.50. Vrooman finished just in front of Vreeland, 4:40.13 to 4:40.99.

In the consolation final, Michael Nunan went for the outside smoke in lane 8, taking it out very strong and keeping the lead for most of the race. Aidan Burns came home in a 1:44.2, though, and got in there for the win with 4:23.04. Nunan held on for second in the heat, going 4:24.25. Ben Bravence of Minnesota was third in 4:26.13.

There was intrigue in the A-final of the 500, but it wasn’t in the battle for first. Club Wolverine’s Connor Jaeger took control from the beginning and set the pace for the rest of the field, effectively sewing up the win early on. However, Tyler Clary and Frank Dyer kept the crowd in suspense over the last 150 or so as they raced for second. Clary got the touch in 4:18.45; Dyer was third with 4:18.83.

The consolation final of the women’s 200 breast was one of the best races of the evening session. The top three were nose-to-nose throughout most of the race. Golden West’s Nora Deleske made a move to put some distance behind her and it paid off, as she was able to stay in front and finish in 2:14.68. Deleske dropped .6 in prelims and another .8 in finals for a total of a 1.3-second improvement. Asphalt Green’s Anna Belousova finished just behind Deleske, touching in 2:15.02; she, too, picked up a new best time. Frisco Aquatics’ Destiny Nelson was the third of the trio to hit the wall; she went 2:15.22.

Minnesota’s Kierra Smith repeated her morning performance, just faster, in the A-final. She went out strong and came back even stronger, dropping another .7 and finishing in 2:05.12, turning in the sixth-fastest 200 breast in history. Melanie Margalis of Saint Petersburg just edged California’s Caitlin Leverenz, 2:07.97 to 2:07.99 for second.

John Bushman won the consolation final, just dipping under his seed time with 1:56.22. Minnesota’s Conner McHugh took second in the heat, ahead of Alpkan Ornek of North Baltimore (1:59.01).

The A-final produced a lot of excitement, with close contests across the board. BJ Johnson took it out first and that ended up making the difference. He was the eventual victor with 1:53.80. Marat Amaltdinov of Purdue dropped another 1.1 and finished second in 1:54.46. North Baltimore’s Conor Dwyer was only .05 behind him. Lyam Dias of Purdue (1:55.22), Carlos Almeida of Louisville Cardinals (1:55.23), and NY Athletic Club’s Mike Alexandrov (1:55.95) were all bunched up and finished nearly together, while Matthew Anderson (1:57.40) and Trevor Hoyt (1:58.57) rounded out the top eight.

Women’s 200 breast. I said that Kierra Smith was the favorite but I forgot that Melanie Margalis was in the race and she looks very strong since last year. Close battle to expect between both girls.