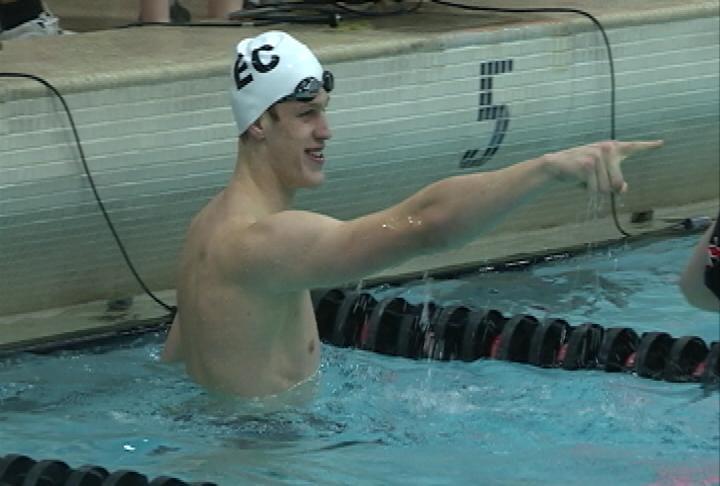 Paul DeLakis took down a WIAA Division 1 record this weekend with 1:36.10 in the 200 free. Current photo via Andrew Cely, Twitter

Paul DeLakis set a new Wisconsin Interscholastic Athletic Association Division 1 record this weekend at WIAA Division 1 State Championships. The Eau Claire Memorial junior swam the 200 freestyle in 1:36.10, destroying the old record, a 1:38.01 set by Michael Drives in 2009, by nearly two seconds. He also came in four and a half seconds ahead of the second-place swimmer.

DeLakis also won the 100 breaststroke, coming within .3 of the state record set by his brother Alex DeLakis in 2013. Paul finished the race in 54.81.

The Madison Memorial boys took a clean sweep of all the relays. Their winning 200 medley relay (1:33.89) consisted entirely of seniors: Justin Temprano, a Wisconsin commit; Rory Sanchez; Ben Gebhart, an Eastern Michigan commit; and Riley Patton. Their 200 free relay of Drake Horton, Patton, Elliot Patterson, and Sanchez narrowly outswam the Eau Claire Memorial/North team’s 1:26.79, finishing the race in 1:26.63. To round out the sweep, Horton, Alex Wowk, Temprano, and Patterson won the 400 free relay in 3:07.83.

Madison Memorial’s sole individual victory came in the 100 back, where Temprano won his third title in three years. He was the only swimmer to break 50, finishing in 49.49, and just missing the 49.34 state record.

Ivar Iverson, a senior from Kenosha Bradford/Reuther, won the 100 fly in 48.66. Gebhart, the two-time defending champion, held with his seed placement, finishing fourth.

Kenosha Tremper saw a victory in the 1 meter diving event, where Brandon Spencer scored 501.90 points for the gold medal.

Brookfield Central/East’s Connor Rumpit, another senior, dropped over ten seconds from his seed time to win the 500 free in 4:34.26.