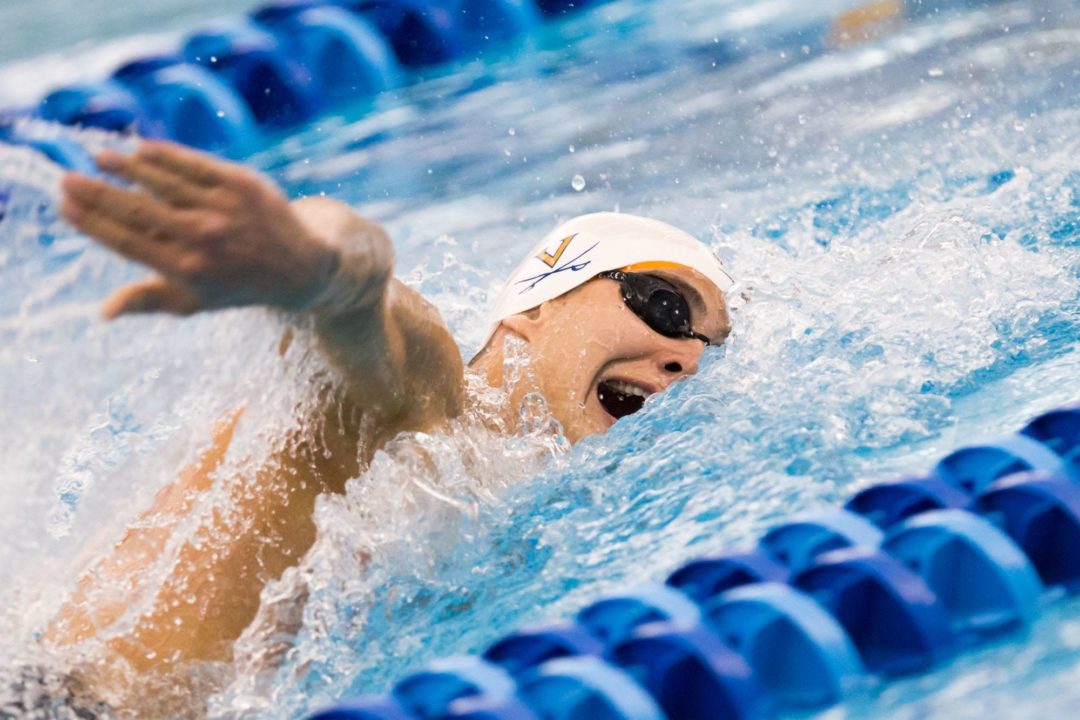 Michigan made a great addition to their men's team for next season as two top tier backstrokers, Luke Papendick and Kyle Dudzinski, both transferred to the Wolverines for the 2015-2016 season. Archive photo via Tim Binning/TheSwimPictures.com

The Michigan Wolverines have completed the turnaround of their backstroking group from a program weakness to a program strength, thanks to the addition of two transfers from the University of Virginia: Kyle Dudzinski and Luke Papendick.

The two were both a part of the group of five that were suspended in the fall of 2014 after a university hazing investigations, and neither would race again for the Cavaliers.

As a freshman in 2013, Papendick won the B-Final at the NCAA Championships in the 200 back, swimming a 1:41.50. He was about half-a-second better at the 2014 ACC Championships in that event, but slipped to 14th at that year’s NCAA meet as the men’s 200 backstroke has seen a drastic rise in competitiveness in the last three years.

He’s been under 47-seconds in yards consistently in the 100 backstroke as well, joining a much-improved Michigan backstroking group that had four underclassmen last year go 47.3 or better in the event, and four of the 12 fastest in the Big Ten. When they won the NCAA title in 2013, Michigan only had two swimmers under 48 seconds in the event.

Both swimmers also qualified for the 2014 NCAA Championships, though the only individual points came out of Papendick’s 14th-place finish in the 200.

Looks like swimming fans are more interested in where these ex-UVA swimmers will be swimming and in which events they can make their respective marks. Seems like most people are missing the point. These are young adults at a top academic institution who did more than make a bad decision in their “hazing” of a fellow teammate. Sounds like they need help from someone other than a defense attorney.

I have no specific knowledge of the UVA situation. However, many men’s college sports teams DO practice a form of hazing with new recruits. It is often just one night (unlike a fraternity, which might “haze” the new pledges for weeks or months). But it is VERY common that the upperclassmen athletes host a night for the freshmen. This night is often full of drinking and doing stupid things, all in the name of bonding. Secrecy is mandatory, though participation is NOT mandatory.

At my kids’ college, I forbid their participation as upperclassmen, after I found out what they were encouraged to do as freshmen, reasoning that they could be tossed out of school for hazing. And though my… Read more »

I totally agree w wahooswimfan. That program was so solid both in and out of the pool for decades. I seriously doubt “hazing” happened as we tend to think of it. These guys got made an example – the new coaches probably wanted to throw down there card and win over the administration. We all know that’s what ADs want in a new coaching staff. These guys will do well at Michigan. And I have no doubt MB will continue to elevate USC. UVA men’s program will not even come close to USC in the future. Go Mark!

I’m just mystified by the allegation of “hazing.” I swam 4 years at UVA and there was never any instances or practices of hazing, nor have I ever heard of any hazing practices – I’m sorta wondering what was going on – doubt there was or is any hazing, there must be more to this story or the definition of “hazing” must have become very broad. Is just taking new teammates out drinking for a night now considered hazing?

So they get caught hazing and get praised? I get that he was recruited by Bernadino, who also left abruptly, with little to no explanation. I know the faithful will always back the program, but it really stinks of a new staff dealing with old problems. Good riddance, UVA will only prosper from this.

UVA men’s swimming was a family that I was part of for 25 years and the coach Mark Bernardino was the head of the family. He taught that not only hard work brings results, but that the team show respect, support each other and treat their teammates and opponents with respect, honor and class. None of these attributes can be linked to the current head coach nor the athletic administration. In the MB era swimmers made mistakes and the punishment was swift and short and swimmers became better adults and athletes by learning from their mistakes. Most of the time swimmers were mentored through there issues. DWOLF – don’t put all the blame on the swimmers. A good coach should… Read more »

Dudzinski only had one decent year out of 4, at UVA.

UVA mens program was bad last year because the many men that quit were stubborn- would not accept change of coach. Not the first program to take a hit when coach is let go. Time will tell if new coaches can develop the program again.

Congrats to Michigan! Those are 2 great swimmers and even better young men. Go B1G!!