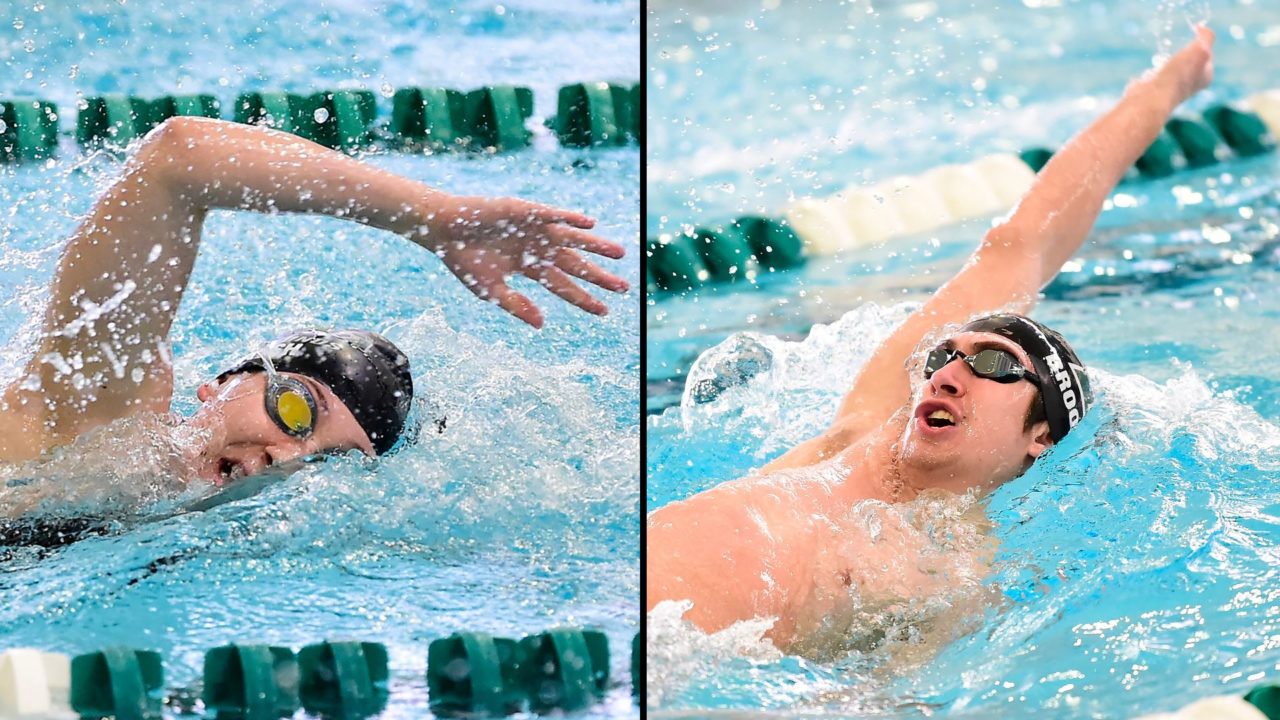 The men's team won all 16 events en route to its 189-73 win while the women's squad won 15 of 16 events to post a 197-75 victory over the Mountaineers. Current photo via David Sinclair / Loyola Athletics

For the men’s team, sophomore Max Verheyen, junior David Sears and junior Reid Hussey combined for seven event wins to lead Loyola. Verheyen, who also swam on the victorious 200-medley relay, took firsts in the 200 freestyle and the 200 backstroke. In the 200 free, his time of 1:42.39 led a Loyola sweep of the top three spots as sophomore Dylan Champagne was second and senior Mark Boran took third.

Verheyen, the 2000 Patriot League Rookie of the Year, also led a sweep of the top three spots in the 200 back. He won the race with a time of 1:52.01 while junior Jonathan Brooks took second and Kyle Lo was third.

Champagne led a Greyhound sweep in the 500 free. He won the race in 4:43.53, beating out teammates Mark Boran and Dean Spicer.

The men’s team started the meet well as they swept the top two spots in the 200-medley relay. Senior Colin Anderson and junior Jimmy Hayden joined Rutigliano and Verheyen on the “A” team and won the event with a time of 1:33.29. The Greyhounds’ “B” team of freshman Jack Inman, Hussey, Atwood and Grahor took second place.

Junior Nick Pacitti led the Greyhounds in the 1000 free with a winning time of 10:16.45. Sophomore Tommy Noone took second in the race.

The 400 free relay squad of Champagne, Hayburn, John Nguyen and Brooks closed out the meet with a first-place time of 3:10.38.

Junior Elizabeth Walsh and freshman Lily Mead led the Loyola women’s team to its win as they combined to win five events and they teamed up to help the Greyhounds capture the 200-medley relay title. Walsh and Mead joined freshman Alana Andress and sophomore Claire Bowser to win the relay with a time of 1:49.07. The Greyhounds’ “B” team of Stella Meyerhoeffer, Emma Schouten, Michelle Lebed and Alison Prushinski finished second in the race.

Walsh won the 200 free and the 100 fly against Mount St. Mary’s. She finished first in the 200 free with a time of 1:58.48 as the Greyhounds took the top three spots. Andress was second and Meyerhoeffer took third. In the 100 fly, her time of 58.95 edged out Bowser and Izzy Barnette for the title.

In the 1000 free, freshman Kylie Preihs finished first with a time of 10:58.93. Freshman Elena Mugno took second and Barnette was third.

The Mount’s only first place finish came in the 100 back where Kira Buchler took first while Tyranski was second and Maggie Manchester finished third.

Meyerhoeffer, Prushinski and Manchester took the top three spots in the 200 back. Meyerhoeffer won the event with a time of 2:11.50.

In the 500 free, Andress picked up a first-place finish with a time of 5:23.78. Junior Maggie McCann was second.

The 400 free relay group of Bowser, Meyerhoeffer, Walsh and Jen DeGroat (3:41.94) rounded out the women’s victories.

Now 1-1 on the season, both the men’s and women’s teams host American University next Saturday at 1:00 p.m.