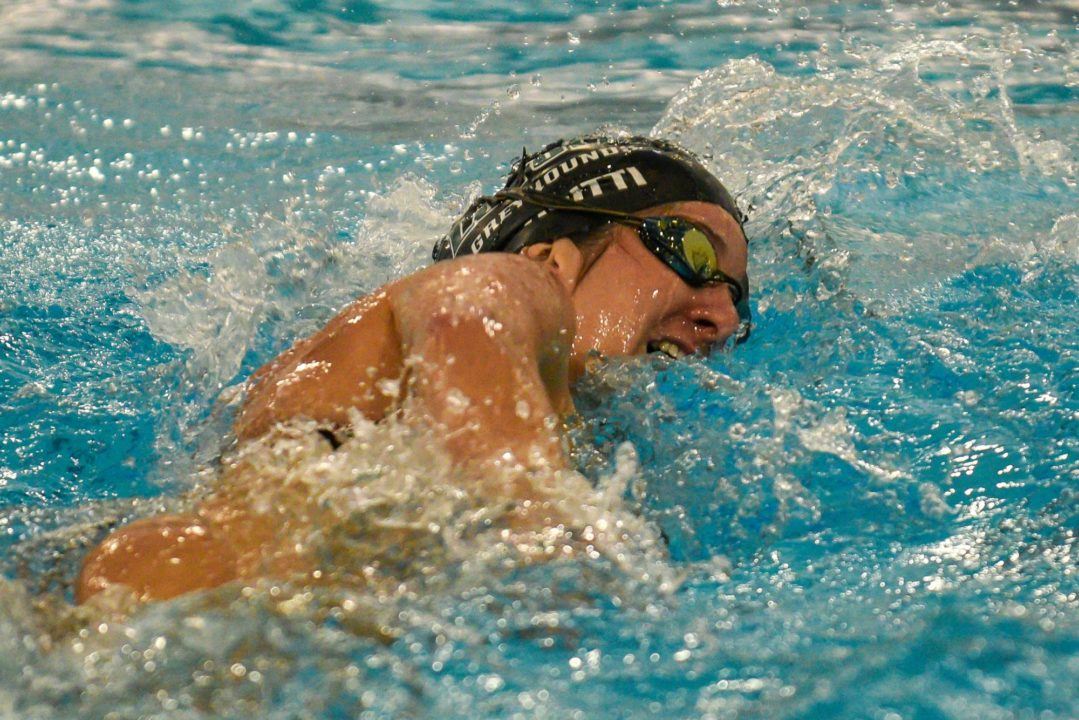 Freshman diver Jeremy Unanue won the 1-meter diving event with 146.62 points and scored 171.57 points in the 3-meter dive as an exhibition performer.

The Greyhounds’ 200 medley relay team of Lee, Callaghan, Rutigliano and Anderson took first place with a time of 1:33.68 to open the meet. In the 200 free relay, Chan, Patrick Clisham, Pacitti and Anderson posted a time of 1:28.28.

In the women’s race, the Greyhounds took a big lead in the 200 medley relay as their teams took the first two spots.

Emily Koegl, Devin Cronin, Huckenpoehler and Dickey finished first with a time of 1:48.64. The Greyhounds’ “B” team of Faith Tyranski, Emma Schouten, Sophie Jahan, and Aly Pacitti was second (1:51.67).

In the 50 backstroke, freshman Taylor Ament took first place (28.61) as the Greyhounds too the top three spots. Freshman Maggie Manchester was second (29.81) while Emily O’Halloran was third (31.88).

The Greyhounds will now take some time off to prepare for the Patriot League Championship Meet which runs from February 20-23 at Bucknell University.

Mary Lombardi and Jordan Friedman each posted a pair of top-two individual finishes to pace the Mount St. Mary’s women’s swimming & diving team in a dual meet at Loyola on Saturday. The Mountaineers fell to the Greyhounds by a 159-111 margin in the team’s final tune-up before postseason competition.

In the 1-meter diving event, Laci Vickery posted the team’s top score with a 158.62 to earn a second-place showing, while Laura Kingham (153.15) and Catherine Davis (130.88) finished third and fourth, respectively.

In relay action, the Mounts squad of Villagran, Maggie deTar, Friedman and Lombardi took the top spot in the 200 free relay with a time of 1:44.41. In the 200 medley relay, Eliza Felos, Gullickson, Villagran and deTar combined for a time of 1:54.07 to place fourth.

The Mount St. Mary’s men’s swimming & diving team was topped by Loyola, 149-89, on Saturday at Mangione Pool in the team’s final action before postseason competition.

The Mountaineers won three events on the afternoon, highlighted by a victory in the 50 fly from Ryan Carroll in a time of 23.21. Peter Jones posted the team’s other win in individual events, taking the top spot in the 100 IM with a time of 53.86.

In the 200 free relay, the Mount’s top team of Will Twizell, Andrew Jones, Brock Cudahy and Carroll combined for a time of 1:28.60 to earn a first-place finish.

In the 200 medley relay, Jonathan Mata, Twizell, Carroll and Peter Jones raced to second place with a time of 1:34.26.

The Mountaineers will be in postseason competition at the Coastal Collegiate Sports Association Championships on February 20-23 at the Liberty Natatorium on the campus of Liberty University.