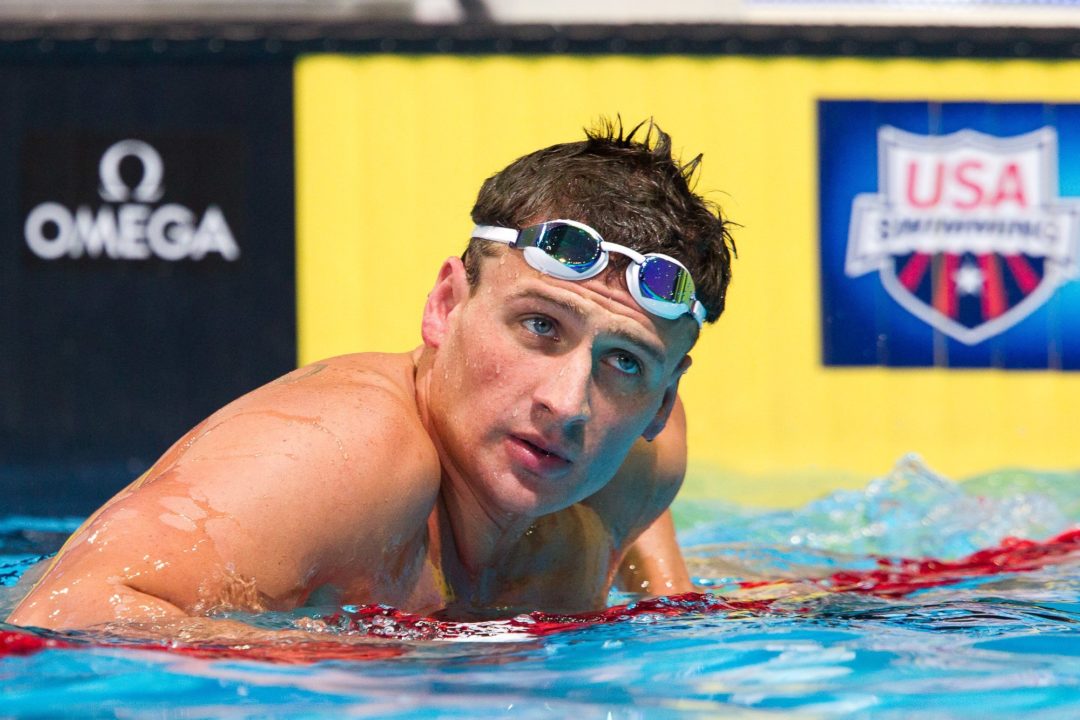 After having a very relaxed morning, qualifying first in the 200 IM with a time of 2:07.87 Ryan Lochte returned...

Some of Canada’s top swimmers, including Penny Oleksiak and Taylor Ruck, train out of the centre.

After having a very relaxed morning, qualifying first in the 200 IM with a time of 2:07.87 Ryan Lochte returned to the pool in the evening to dominate the event, winning by over six seconds. Lochte finished first in a season’s best of 2:00.12 breaking the meet record of 2:01.73 that was set by Mitch Larkin last year.

Lochte’s previous season best of 2:00.98 was recorded at the Austin Grand Prix in January.

Lochte was not quite as successful in his first event of the evening finishing second in the 50 backstroke being beat out by the University of Calgary’s Gleb Suvorov who recorded a time of 26.39. Lochte finished second in a time of 26.52 followed by Russell Wood of the Cascade Swim Club who finished third in a time of 26.62.

Noemie Thomas of the UBC Dolphins took the 100 butterfly easily finishing over three seconds ahead of her competition. Thomas who is always a quick starter took the first 50 out in a time of 27.80 half a second ahead of Hannah Weiss of King Aquatic Club. Thomas extended her lead in the second half of the race finishing in a time of 58.78.

That is 47 one-hundredths of a second away from her fastest time this year of 58.31, which she recorded at the World Championships Trials in April.

Lili Margitai of Team Alberta made up a full second on Weiss in the final 50. Both girls finished in a time of 1:02.09 tying for second.

In the men’s 100 butterfly UBC Dolphins’ Coleman Allen won the event by in a time of 54.71. Allen will be swimming this event in Barcelona qualifying for the team at the World Championship Trials where he posted a time of 53.57.

The women’s 50 backstroke was won by 14 year old Ingrid Wilm of Team Alberta in a time of 29.58 one one-hundredth of a second ahead of Hannah Weiss of the King Aquatic Club who finished second in a time of 29.59.

Wilm, who is part of the Alberta team that will be competing at the Canada Games later this summer was just 11 one-hundredths of a second away from the Alberta provincial record which she broke in April.

She was followed by Gator Swim Club’s Jess Thielmann who posted a time of 4:16.29 and Lindsay Delmar of the University of Calgary who finished third in a time of 4:17.30.

In the men’s 400 freestyle Island Swimming’s Jeremy Bagshaw took a lead of just under four seconds at the midway mark and in the second half increased it to six seconds, winning the event in a time of 3:53.56. Keir Maitland of the Keyano Swim Club finished second in a time of 4:00.16 followed by Sean Penhale of the Cascade Swim Club who finished third in a time of 4:03.27.

The University of Calgary’s Tianna Rissling took the women’s 200 IM in a time of 2:17.30. Rissling, who competed in the sprint breaststroke events at the 2010 Pan Pacific Games, trailed Rachel Millet of the University of Idaho by two seconds at the 100, Rissling then went on to have the fastest breaststroke (37.58) split in the race by a full three seconds.

Natalie Hinds won the women’s 50 freestyle in a time of 25.87. She was followed by King Aquatics’ Ashley Sutherland who recorded a time of 26.57 and Paige Kremer of Team Alberta who finished in a time of 26.61.

In the men’s 50 freestyle UBC Dolphins’ Luke Peddie and Florida’s Bradley deBorde both touched the wall in a time of 23.67 tying for the win. David Hibberd of Simon Fraser Aquatics finished third in a time of 23.73.

UBC Dolphins’ Tera Van Beilen once again got the best of the University of Calgary’s Fiona Doyle winning the 200 breaststroke in a time of 2:29.51, but it was Doyle who walked away from the race with the biggest smile finishing in a time of 2:30.26 breaking her own Irish National Record of 2:31.05, which she set in March at the Canadian World Championship Trials.

In the men’s 200 breaststroke Simon Fraser Aquatic’s Andrew Poznikoff held off a fast charging Ashton Baumann to win the event in a time of 2:18.44.

Baumann who qualified to swim this event in Barcelona after tying Richard Funk with the fastest time at the World Championship Trials, finished second in a time of 2:18.62. Edmonton Keyano’s Nick Kostiuk finished third in a time of 2:19.05.

The complete results can be found here.

Didn’t know where to put this, but did Camille Adams move to SwimMac for the summer? It definitely seems like it according to her twitter.

I generally have a good memory and I remember seeing her with a swim cap from SwimMac at the Charlotte grand prix.