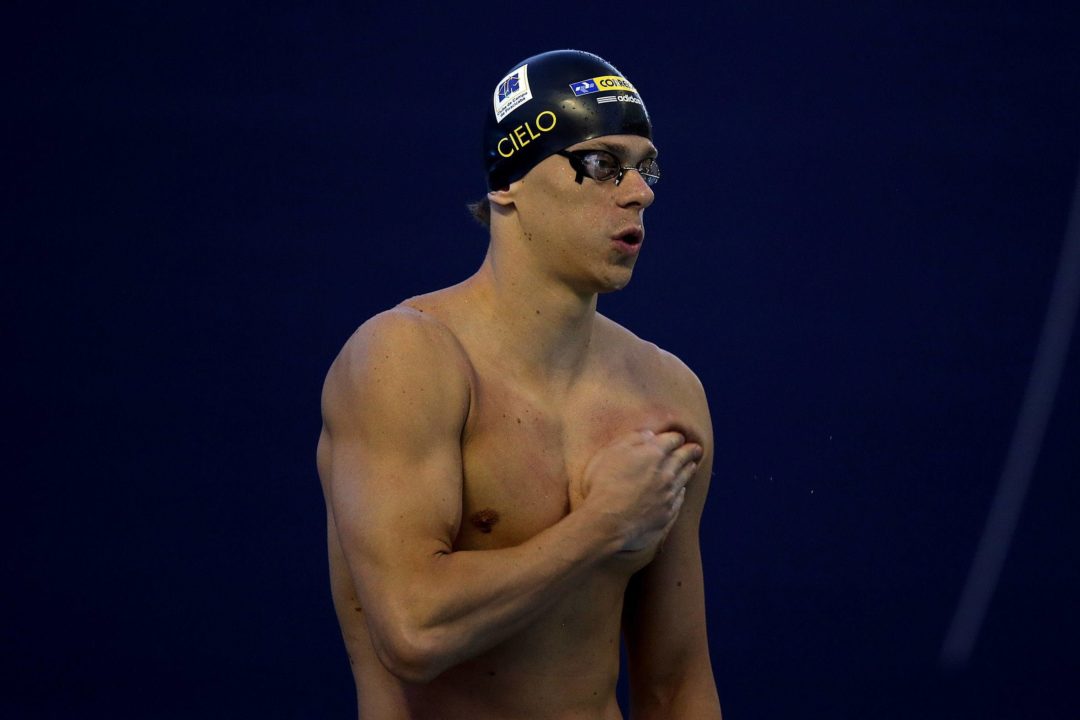 South African Roland Schoeman was first off the block, but Cesar Cielo more than made up for it on top of the water en route to victory at the Arizona Invitational. (Photo: Satiro Sodre/SSPress)

Thanks to Takahisa Ide for capturing the above video of the 50 free final.

On Saturday night under the lights in Phoenix, a four swimmer 15 & over 50 free final saw two stars and two Olympic gold medalists Cesar Cielo from Brazil and Roland Schoemanfrom South Africa do battle in the premier swim of the meet.

Both swimmers have been better than that this year, and both will swim at the World Championships, but this was a good mid-season test for the two in a relatively low-pressure atmosphere. Cielo on top of the water in this swim looked as powerful as anyone in the world. It’s clear, though, that he’s still suffering from knee surgery earlier this year. Schoeman crushed Cielo off of the blocks, which historically is an area upon which the Brazilian relies for much of his advantage in this sprint race. Of course, Schoeman is known to be a very good starter as well, but Cielo still seems to be rebuilding strength in his lower half.

The other two swimmers in this special four-swimmer race were another South African pro Darian Townsend who took 3rd in 22.97, and home-turf favorite Herbie Behm from meet co-hosts Arizona State in 23.42.

Still no Kevin Cordes in long course this season? Does he keep the fireworks just for Indianapolis?

That’s what I’ve been wondering…what’s the deal? Although no Giles Smith yet either.

Schoeman is looking mean this year. Old boy may be coming home with some medals from Rio. Nice time for Townsend.

Cesar’s start was rough. If his knees are better at world champs expect a medal. Roland is consistent and came back with a solid showing at the Olympics last year (after being out of the international scene for a few years), but he can’t hang with Cesar, Florent, Vlad, or Adrian among others.

Yeah, Roland had him beat on that start, but Cielo was able to make it up on the water. Cielo will have to have it all together if he expects to defend his title.

I dont believe Cielo will be capable to defend his title.His first 15 meters are 0.4s slower than his best.Thats a lot in a 50free.Okay, his last 25 meters are impressive, but i kind of expected that because he is not training for 100free.At his best(if you take his Maria Lenk time of 21.57)He will be capable of something like 21.17!Sick!But is not gonna happen this year.

In season, no wedge, bad knees… I would be afraid to give it 100% off that block too. I think that he will surprise as the season goes on. I would be very curious to see what his training program looks like working with Scott.

Also would be even more curious to see what Roland has been doing that has made this huge change in his swimming. I believe he is working with Aaron Clara out of Miami and Nick Folker out of Cal. Can someone please get an interview with the legend?