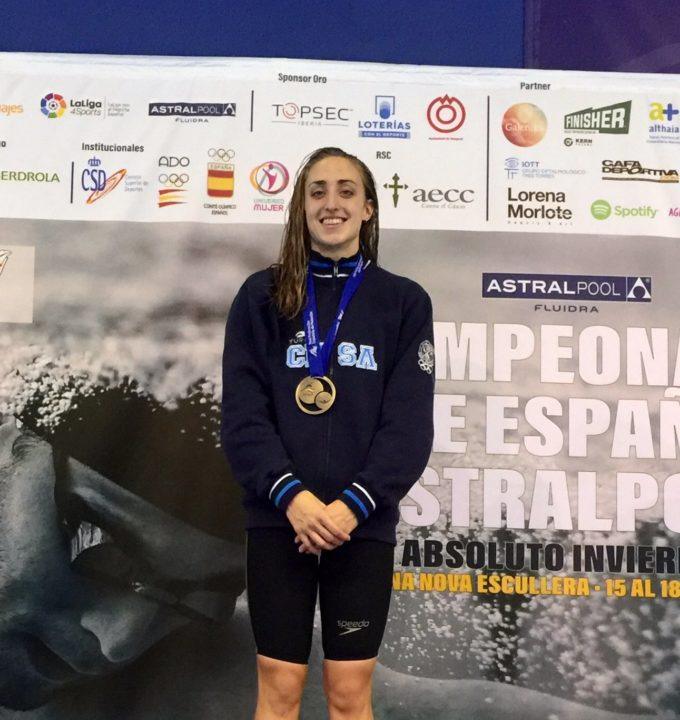 For Munoz, the more immediate hurdle cleared is that her finals swim snuck under the 53.24 that Spanish authorities are requiring to add new swimmers to the Worlds team in this event. She’s the first new addition to the Short Course Worlds team at this meet.

She also became the first double gold medalist of the meet after winning the 100 IM on Thursday.

Qualified Swimmers After Day 2 for the 2018 Short Course World Championships:

Interesting how Cesar Castro’s shifting his focus toward shorter distances: for him best split in the 800 free relay and second place in the 100 free.
Also the other 1999 born, Hugo Gonzalez, with a good 100 fly and a very disappointing 400 im, looks in a transitional phase of his swimming career.

César had surgery on both shoulders, one after he classified to Olympics in 2016 being still 16 years old and another a year later.
His recovery is short of amazing. According to some articles and interviews, he is training and focusing on the shorter distances as he cannot put the mileage training needed for 1500.
I think he will go under the Spanish qualifying time in the 200 freestyle in the finals this evening.
Hugo went under qualifying times in 100 back and 200 medley in the preliminaries this morning with 51.47 and 1:55.22.
Yesterday he swam 400 medley and 200 breastbone with about 30 minutes rest.
I think he is focusing at shorter distances.… Read more »