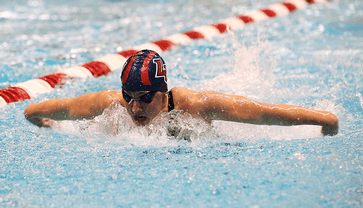 The Liberty swimming & diving team will compete in the FGCU Triple Distance Classic to begin the new year, Friday at 5 p.m. at FGCU Aquatics Complex.

Tomorrow’s meet will feature a unique twist. Each athlete will pick one stroke, and will compete in the 50-, 100- and 200-yard races of that stroke. Their times for all three races will be added up, with a champion crowned for freestyle, backstroke, breaststroke, butterfly and individual medley. Also, a combined diving champion will be named, and the team with the fastest combined relays will be honored. The meet itself will be scored in invitational style, with 16 athletes scoring in each event. Event scoring will be as follows: 20-17-16-15-14-13-12-11-9-7-6-5-4-3-2-1.

This is the seventh time in the last eight years that Liberty will begin the New Year with a meet at Florida Gulf Coast. While in Fort Myers, the Lady Flames will take on three-time defending CCSA champion FGCU, along with Rutgers, Saint Louis and Division III program Gustavus, the 2017 MIAC runner-up. This will be Liberty’s second meeting this season against Rutgers, as both teams competed in the Frank Elm Invite in November (Rutgers – 2nd place; Liberty – 6th place).

So far this season, Liberty holds a 6-2 record, including 4-0 against CCSA opponents. The Lady Flames nearly knocked off defending Big 12 runner-up Kansas and have picked up conference wins over Campbell (twice), Gardner-Webb and Georgia Southern.

Junior Amy Schools was named CCSA Women’s Diver of the Week on Oct. 10 and again on Dec. 5. Schools is the fourth Lady Flame to earn CCSA Diver of the Week honors, and first since teammate Jenna Joyal, Oct. 11, 2016.

Liberty opened its brand-new Liberty Natatorium, Dec. 1-2, with the Central Virginia Duals. The Lady Flames defeated Campbell, 237-94, winning 12 out of 13 individual events on the weekend.

Alicia Finnigan led the way for Liberty with three individual-event wins (200 fly, 500 free, 1000 free) at the Central Virginia Duals. She swam a season-best 2:02.09 to win the 200 fly. Finnigan won the 200 fly at the 2017 conference meet, before setting a conference record, with a time of 1:56.15 at the Bulldog Last Chance Meet to qualify for the NCAA Championships. She then tied for 10th place in the 200-meter butterfly at the Phillips 66 National Championships in the summer.

Starting last season, Rachel Hoeve has been dominant in the 50 free, going undefeated in dual meets. She has won the event 11 straight times in dual-meet action, including a season-best 23.30 on Dec. 1. She made three A Finals appearances at the 2017 CCSA Championships, highlighted by a fourth-place finish in the 50 free in NCAA B cut, personal-best 22.76. Her 22.76 50 free is tied for third in program history.

Liberty’s relays had great performances at Virginia Tech. The 200 free relay of Hoeve, Colleen Donlin, Brittany Weiss and Hannah Baker won in 1:33.79, .01 seconds ahead of Virginia Tech’s A team. Liberty’s 200 medley relay placed third, but their time of 1:43.07 was the third-fastest regular-season 200 medley relay time in program history.

Head Coach Jake Shellenberger is in his eighth season at the helm, guiding the program since the inaugural 2010-11 campaign. He has posted a 79-30 dual-meet record, twice being named CCSA Women’s Swimming Coach of the Year. His teams have gone 46-14 against CCSA competition.

After Friday’s meet, Liberty will return home to host Marshall and UNC Asheville, next Saturday, Jan. 13 at 11 a.m. at Liberty Natatorium.