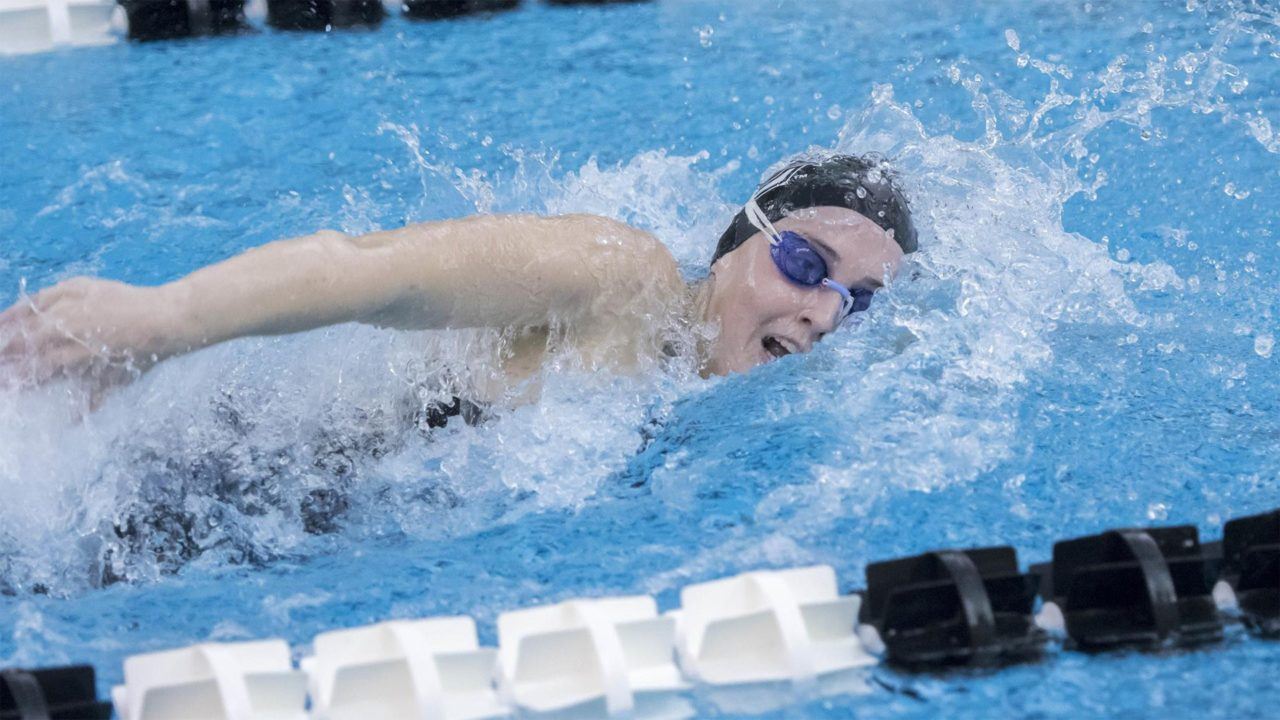 BETHLEHEM, Pa. — The Lehigh women’s swimming and diving team made history on Friday afternoon. Already riding a six-meet winning streak, the Mountain Hawks got the best of Army West Point, defeating the Black Knights 164.5-135.5 on Senior Day at Jacobs Pool to improve to 7-1 on the season.

7-1 is Lehigh’s best start to a season since 1999-00 and the win over Army is the Mountain Hawks’ second in as many years.

The meet started off on the right foot in the 200 medley relay with the team of sophomore Anna Francisco, senior Allison Morel, sophomore Olivia Giampietro and junior Payton Miles getting the first place finish with a time of 1:46.77. The B-team of Nicole Shek, Anna Thomas, Malia Wolf and Evie Gieseman finished third place with a time of 1:48.25.

Giampietro got her first place finish in the 100 fly, with Wolf finishing third to give Lehigh an additional three points.

Finally, the Mountain Hawks finished off the meet with a big victory in the 400 free relay as Foley, Giampietro, Ferreira and Miles dominated the competition with a 3:31.06, finishing ahead of Army’s Mia Rankin, Bailey Smith, Sammie Edwards and Madison Berg, who swam a 3:37.16.

“Army’s women are tough and do not let up,” said head coach Rob Herb following the victory. “We focused on us and who we are and that made the difference.

“During this time of hard training, getting up for a meet can be physically challenging, but our girls used their minds to overcome it. A big thanks to the Lehigh Sports Psychology group that works with us.  The bodies just went along for the ride and won.”

The women will look to finish out the dual meet season on an eight-meet winning streak when they visit Bucknell on Jan. 26.

It wasn’t the result they were looking for, but the Lehigh men’s swimming and diving team left Jacobs Pool with their heads held high after falling to Army West Point 203.5-96.5 on Senior Day Friday afternoon.

The loss drops the Mountain Hawks to 5-2 on the season, snapping their five-meet win streak dating back to Oct. 6 at Boston U. The Black Knights are also now 48-0 all-time against Lehigh.

The Mountain Hawks took the final event of the afternoon, the 400 free relay, with a winning time of 3:07.16, thanks to Joey Rogers, Greg Giannella, Max Goldenberg and Wilson.

Second-place finishes were a common theme for Lehigh, who struggled to get past a very quick Black Knight team, who have shown their dominance on many occasions this season.

The team of Owen Thomas, Tyler Christ, Teddy Smith and Giannella took second in the 200 medley relay with a time of 1:34.05.

In diving, Tyler Keller finished in second place in the one-meter dive with a score of 263.69. He also placed second in the three-meter with a 258.75.

“We had huge, huge efforts and great results, but the Army men are tough as nails,” said head coach Rob Herb. “It was great to compete and even catch a few wins on the day.”

Lehigh will attempt to close out the dual meet schedule on a high note when the Mountain Hawks visit Bucknell on Jan. 26.

WENDER’S WORDS
“We swam tough against an inspired Lehigh team on their senior day,” head coach Mickey Wender said. “Lehigh was ready for us and swam great today. We did a good job overcoming some adversity, especially after traveling back from Florida and a long reorganization week. I thought we got better as the day went on and we will be a lot better tomorrow at Bucknell. We’re at the peak of our training, coming off a 10-day training camp in Orlando. Executing well while in heavy training is a learned skill and an important part of the developmental process. We were tough and we’re getting better every day.”

UP NEXT
The Black Knights return to action tomorrow afternoon for a 1 p.m. Patriot League dual against Bucknell in Lewisburg, Pa.

BETHLEHEM, Pa. – The Army West Point men’s swimming and diving team captured a 203.5-96.5 over Lehigh in a Patriot League dual on Friday afternoon at Jacobs Pool.