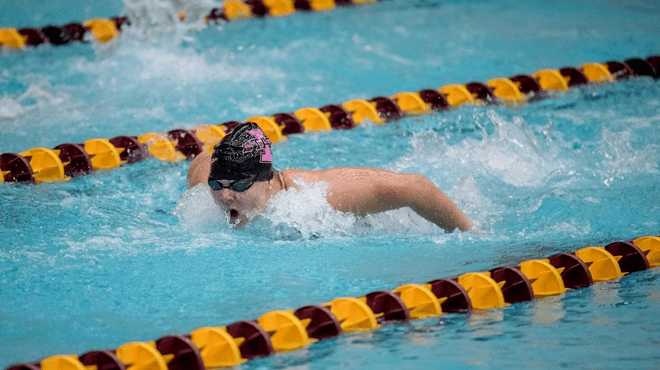 The Iowa State Cyclones (4-3, 1-0 Big 12) topped the Omaha Mavericks by a score of 153-68 on Friday night. The Cyclones won 11 of 13 events in the lopsided victory. Current photo via Iowa State Athletics

Iowa State began the night by winning the first seven events. The top relay squad of Emily Haan, Martha Haas, Elynn Tan and Anna Andersen combined for a 3:53.79, over 10 seconds faster than the fastest Omaha team. Haley Ruegemer clocked in a 1:55.97 in the 200 free for her first event win of the season, while Lucia Rizzo took the top 1000 free spot with a 10:39.64. Andersen won the 50 free in 24.54 and Kami Pankratz earned a victory in the 200 IM by out-touching the Maverick’s Martini with a 2:11.54 to round out the first half of the meet.

In the diving well, Dana Liva won the three-meter diving with a 269.70. Jessica Coffin posted her best three-meter score on the three-meter with a 198.45. Sydney Ronald took second in the one-meter competition with a 253.58, Liva just behind her with 251.47 points.

“I thought there were good things we saw from each one of them,” diving coach Jeff Warrick said. “We came off of a long training trip and meet at Georgia, but I think we’ll bounce back and be strong.”

Following the diving break, Rizzo and Ruegemer earned their second victories in the 100 fly and 500 free, while Emma Ruehle won the 100 back with a time of 59.21. The trio of Lehr Thorson, Haas and Bryn Ericksen combined to sweep the 100 breast, followed by a Cyclone victory in the 400 free relay with a 3:32.43. Iowa State won the meet 153-68.

“I thought we raced really well,” head coach Duane Sorenson said. ” We had some swimmers swim different events and I was pleased how they got up and competed coming off of our long training trip.”

Two Mavericks picked up first-place victories at the meet.

Three-time Summit League Diver of the Week and NCAA Qualifier Annika Clinton finished first in the 1-meter dive with a score of 258.82.

Rachel Morrow won the 100-yard freestyle after she tallied a time of 52.74 seconds. The junior also finished second in the 50-yard free when she recorded a time of 24.65 seconds.

In the 100-yard fly, Bethany Gatlin and Grete Baker recorded second and third-place finishes with times of 59.06 and 59.35, respectively. Baker also had a runner-up finish in the 100-yard breaststroke after she tallied a time of 1:09.53.

The 200-yard IM featured Rebecca Martini‘s runner-up result when she recorded a time of 2:12.06.

Lastly, the team of Morrow, Kylie Vermiere, Anna Capoun and Kirsten Kracke concluded the event in second with a time of 3:38.75.

“Tonight was a good meet for our program,” said head coach Todd Samland. “After challenging the athletes with some hard training over the holiday break, they were in a slightly fatigued state. We were hoping for a competitive spirit tonight and that is what we saw. I am very proud of how we competed. The challenge continues tomorrow when we host Nebraska. I am looking forward to seeing how we respond.”