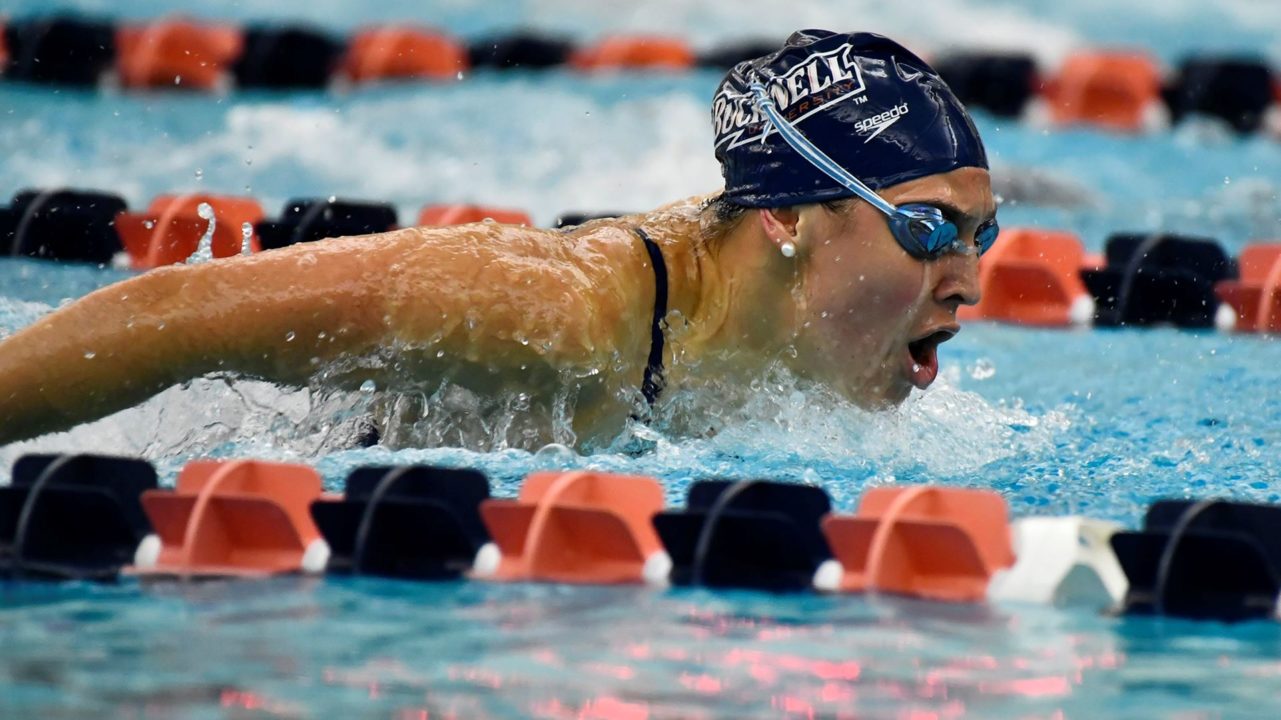 The Brown and White men blew by the Bison 195-93 in front of a jam-packed crowd at Jacobs Pool, while the Bucknell women beat Lehigh 166-132. Current photo via Marc Hagenmeier

BETHLEHEM, Pa. – For the second consecutive season, the Lehigh men’s swimming and diving team defeated the Bison of Bucknell. This time, the Brown and White blew by the Bison 195-93 in front of a jam-packed crowd at Jacobs Pool.

With the win, the Mountain Hawks will end the regular season with a 6-1 record. In all, Lehigh won 13 events of 16 events.

“I’ll tell you what, our men did great did,” gloated head coach Rob Herb. “We recorded a lot of wins and everyone did their job. This was a team win and I couldn’t be prouder.”

There were plenty of key contributions made from this team on Saturday, but one that sticks out is sophomore Glenn Lasco. The sophomore tallied four total wins on the day. His first two came in the 50 free (21.04) and the 100 free (46.30). Then in the 200 free, Lasco recorded a first-place finish with a time of 1:42.02, while then being a member of the 400 free relay team that won along with Joey Rogers, Greg Giannella and Walker Wilson.

The 400 free relay wasn’t the only relay team to capture a win. Following that, the 200 medley relay team of Giannella, Owen Thomas, Connor Sept and Teddy Smith finished first with a time of 1:32.62.

Nico Lastauskas notched an impressive finish on Saturday. The senior took second in the 1000 free with a time of 9:50.47.

With the completion of Saturday’s dual meet against Bucknell, the Mountain Hawks will have roughly a month to rest and prepare for the Patriot League Championships.

BETHLEHEM, Pa. – The Lehigh women’s swimming and diving team concluded its season on Saturday with a tough defeat to the Bucknell Bison on Saturday. From inside Jacobs Pool, the Mountain Hawks and Bison fought-back-and forth, but it was the Bison who pulled away late to secure the 166-132 victory.

With the loss, the Mountain Hawks (6-1) suffered their first defeat of the season and will now prepare themselves for the Patriot League Championships in a month.

“Today was a tough loss for the women,” expressed head coach Rob Herb. “We just could not hold up in the last three events.”

Lehigh won a total of six events on Saturday. The main bright spot came from senior Payton Miles, who was competing in her final meet inside Jacobs Pool. The senior won four total events on the day. Miles won the 50 free at 24.41, while then dominating the 100 free at 51.23.

In the relays, Miles was also a part of the 200 medley relay and the 400 free relay teams that took first. In the 200, Miles, Anna Francisco, Anna Thomas and Malia Wolf registered a time of 1:45.96. Then in the 400, Miles, Ann Foley, Megan Judge and Olivia Giampietro won with an exceptional time of 3:28.84. How fast was that group? Well, the 400 free relay group broke a pool record.

“Payton Miles was outstanding today,” Herb said. “I think she is easily one of the best swimmers in the Patriot League. We also had solid contributions from a number of upperclassmen and first-year swimmers. I look forward to getting better over the next month and we’ll be ready for the PLCs.”

Another member of the team who shined on Saturday was Megan Fennell. The junior took first in both the 1 and 3-meter dives. In the 1-meter dive, Fennell registered a score of 233.55, followed by her 249.89 score in the 3-meter dive.

The Brown and White also had multiple second-place finishes on the day. In the 1000 free, Danielle Prekop finished just behind the winner with a time of 10:37.76. In the 200 free, freshman Megan Judge barely got edged, finishing with a time of 1:53.81, while Sophia Poeta took second in the 100 back with a time of 57.13.

With the completion of Saturday’s dual meet against Bucknell, the Mountain Hawks will have roughly a month to rest and prepare for the Patriot League Championships.

BETHLEHEM, Pa. – The Bucknell men’s swimming & diving team wrapped up its dual meet season with a loss to rival Lehigh on Saturday at Jacobs Pool.

The Bison next attend the Navy Invite on Saturday, Feb. 1 in their final tune-up before the Patriot League Championships on Feb. 19-22.

Bucknell next attends the Navy Invite on Saturday, Feb. 1 in its final tune-up before the Patriot League Championships on Feb. 19-22.