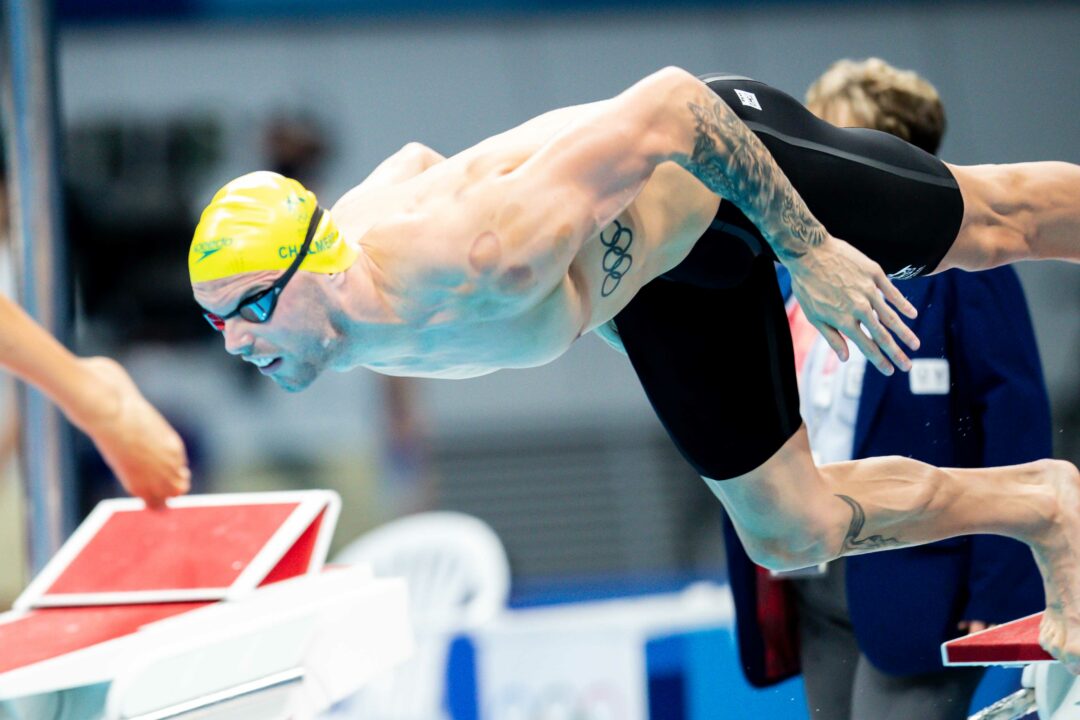 Kyle Chalmers broke the Australian SCM 50 butterfly record over the weekend in Doha. He swam the event in 22.24, coming in second after Tom Shields. Stock photo via Jack Spitser/Spitser Photography

Kyle Chalmers broke the Australian SCM 50 butterfly record with his time of 22.24, swum at the 2021 FINA World Cup stop in Doha, Qatar.

Chalmers beat the former record of 22.28, previously set by Matt Jaukovic in 2009. Jaukovic also briefly held the world record in SCM 50 butterfly, which is now held by Brazilian swimmer Nicholas Santos with a time of 21.75.

At the Doha World Cup stop, Chalmers finished second in an event that had all three top competitors touch within .05 seconds of each other. American Tom Shields led the way with 22.22 and Hungarian Szebasztian Szabo finished third with a time of 22.27.

Chalmers went into finals on Saturday as the number one seed in the event with a time of 22.83. He opted to swim the 50 fly over the 200 free in Doha, a move that emphasized his focus as a pure sprinter this fall. His finals time puts him just .01 behind the best time this year of his main rival, Caeleb Dressel. Dressel swam 22.23 at the International Swimming League’s regular season Match 4.

Training in Stirling, Scotland must have helped!

What is it with the best swimmers from most countries swimming sprint Free and Fly.

Caeleb Dressel, Emma McKeon and Sarah Sjostrom are all arguably their country’s best currently active swimmers, and they all swim 50/100 Free and 100 Fly. All three have Olympic medals in all three events, plus Emma and Sarah both have medals in the 200 Free as well.

Now it looks like Kyle is trying to join the gang? Haha

Because physically there is a lot of crossover between the traits succesful athletes in each stroke have.

I don’t understand this take. I don’t think any particular strokes have disproportionately high crossover with other strokes. Why does it just so happen that three of the best (arguably the three best) currently active swimmers swim the exact same events? This doesn’t occur with any other top performers in any other stroke.

Take the top female backstrokers for example: Kaylee does IM, Regan does 200 fly and Kylie only really does back. I can’t think of any other similar combo, except the top swimmers in the world all seem to swim 50/100 Free and 100 Fly.

And MA pretty much all sprint and 2IM. Best at 50Fr and 100Br, funny combination

I think we are. In 2017 and 2020 he was sidelined by heart surgery and shoulder surgery. He’s starting to get into a form that will be incredibly difficult to beat.

God it would be poetry to see Kyle unexpectedly win gold in Rio, then still maintain his good form despite so many health issues to just fall short in Tokyo by 0.07 seconds, then find a new peak and win gold in Paris.

Seriously, take all my money. I would watch that movie 100 times.