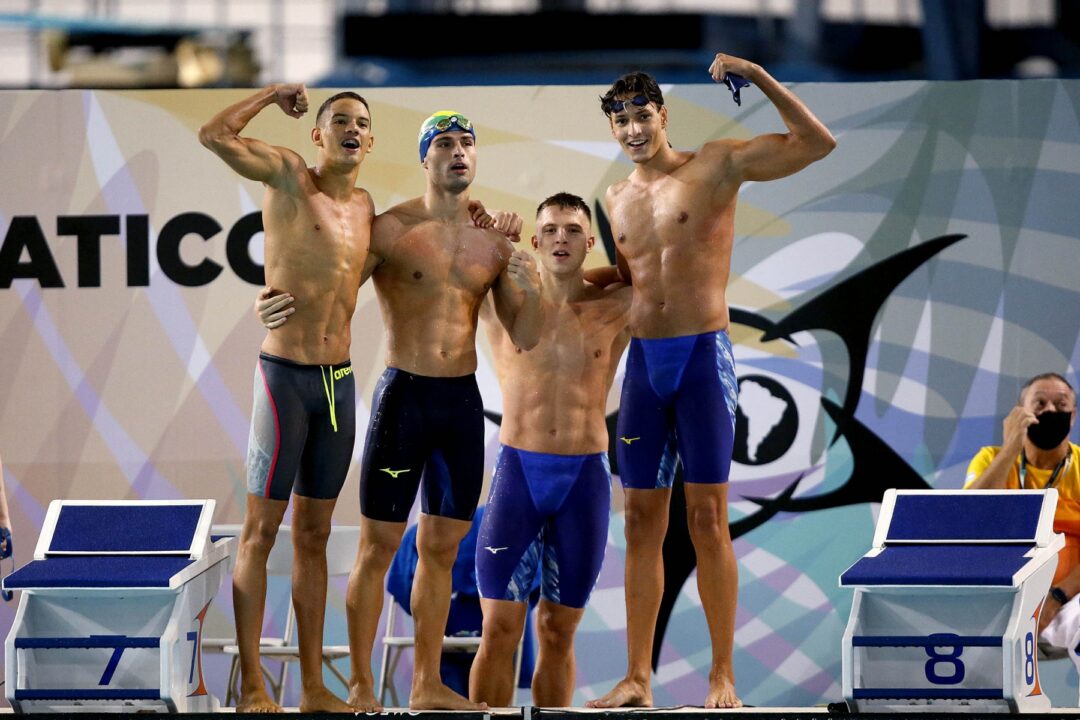 The Brazil men finished out day 3 of the South American Championships in Buenos Aires with a win in the 400 freestyle relay. Current photo via Satiro Sodre/SS Press

The South American Championships, which were delayed a year due to the Covid-19 pandemic, have been taking place this week in Buenos Aires, Argentina. Countries such as Puerto Rico and Mexico, which don’t normally participate, have also sent teams to the meet, though they’re not being included in the official meet scoring.

Starting the finals session on day 3 of the meet, the penultimate day of competition, was Kristel Kobrich of Chile who, at 35, swam below the Olympic A-cut in the 1500 meter free, with a time of 16:06.78. Kobrich led from start to finish, averaging splits nearly a second faster than runner-up Delfina Pignatiello (16:25.68), who was the 800 free champion earlier this week.

Winning her third event of the meet was USC freshman Anicka Delgado. After opting out of the NCAA Championships this week to focus on Olympic qualification in long course, Delgado has been on a hot streak, claiming wins in the 100 free, 50 fly, and now the 100 fly.

She topped the field in the 100 fly on Thursday with a time of 1:00.27. That race that saw only .38 separate the top-4 contestants. At the Pac-12 Championships in February Delgado finished as the bronze medalist in the 100 free and 8th in the 100 fly.

While Delgado missed the Olympic B-cut in the 100 fly on day 3, she did achieve the 100 freestyle cut on the first day of the meet.

Yeziel Morales of Puerto Rico won his second event in two days, this time in the 200 back. While Puerto Rico doesn’t score points at the meet, Morales finished almost three seconds ahead of the second-fastest swimmer, touching in 1:59.38.

That last relay win by Argentina, where they cleared Colombia by half-a-second and Brazil by seven-tenths of a second, bumped them to the top of the medals table. Brazil has historically dominated the medals at this meet, leading the table every year back to at least 2004 (records are harder to find prior to that).