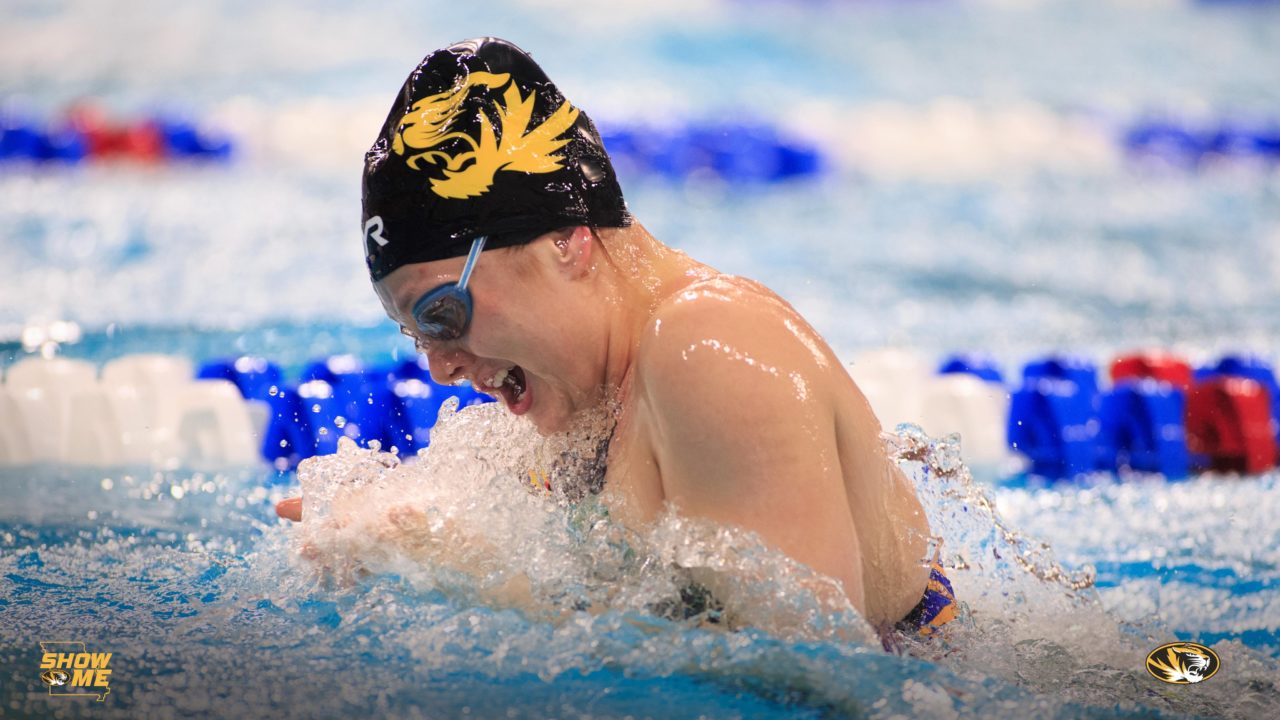 Missouri breaststroker Kayla Jones (above) will make her 2nd NCAA Championship appearance after swimming on a prelims relay as a freshman in 2019. Archive photo via Missouri Athletics

Update: USC says Delgado will race at the South American Championships, an Olympic qualifier, instead to represent Ecuador.

As the 24-hour deadline nears for teams to scratch swimmers from individual events and invite alternates to the NCAA Championship meet, a second scratch has officially gone on the board.

USC freshman Anicka Delgado has withdrawn from her individual events at the meet. As a result, Missouri breaststroker Kayla Jones will join the field in Greensboro in March.

The latest public version of the psych sheets, produced at 8:14 AM on Thursday morning, do not yet include the withdrawal of Michigan’s Daria Pyshnenko, who told SwimSwam on Wednesday that she wouldn’t be racing at the NCAA Championships. Georgia’s Sloane Reinstein would be the next-in-line for a spot at NCAAs.

USC says that she will instead be headed to Argentina to compete in the South American Championships for her native Ecuador, which run from March 14-29. That meet will be the country’s primary Olympic Qualifier. While Delgado was raised in California, she represents Ecuador internationally – including at the 2019 World Championships.

Her invite specifically comes via a 2:10.49 in the 200 breaststroke that makes her the 41st seed in that event. She has also added the 100 breaststroke as an alternate event, where her 1:01.21 season best qualifies her 47th out of 48 swimmers.

This will be Jones’ second NCAA Championship meet. She swam as a prelims-only breaststroker on Missouri’s 200 medley relay at the 2019 NCAA Championships, splitting 28.30, which was the slowest split of the prelims heat. That relay was 9th in prelims and she was swapped out for Emily Snyder in finals. Snyder split 28.12 in the evening swim and the relay placed 10th.

Scratches made more than 24 hours after the public announcement of the invites list won’t be replaced with alternates, a special rule employed by the NCAA this year because of ongoing challenges with the coronavirus pandemic.

Kayla Jones!!!!! My favorite swimmer to watch. I predict a biiiiiiggg swim out of her at this meet, watch out!👀

What’s the latest on Daria P scratching ? Are Michigan coaches hedging she will swim ?

She’s still on the psych sheet, and it appears as though the 24 hour window has passed.

Unfortunate that Michigan coaches didn’t free up her spot ? Why is this allowed ? Not good for the program’s reputation.

Delgado is.probably going to miss ncaa because of the south american champs where she represents ecuador

Yes,they added that info after I commented