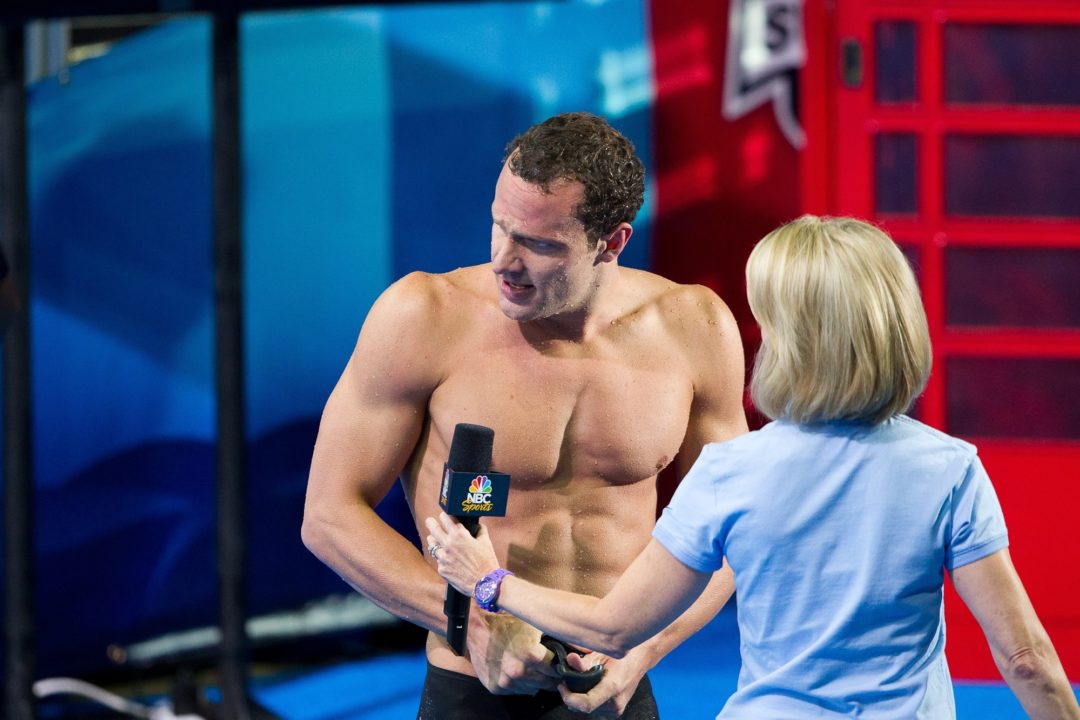 The rivalry between Kosuke Kitajima and Brendan Hansen is one of the most well-known in the swimming world, and it came to a head at the 2004 Olympic Games. Current photo via Tim Binning/TheSwimPictures.com

It’s time to kick off a new week of SwimSwam’s daily dryland at home workout series with some HIIT full-body training.

A little relaxation combined with a little bit of work to get your heart rate up is a good way to finish off another week of drylands.

You will quickly find that when everyone starts at locations NOT at the wall, there are a few confusing things that need to be addressed in your sets.

TritonWear and SwimSwam are bringing you the best in swimming race analysis. With the power of TritonWear, you can have an in-depth analysis of your practice every day with zero effort. Today we are having a closer look at one of the fiercest duels in swimming: Kosuke Kitajima vs. Brendan Hansen.

The rivalry between Kosuke Kitajima and Brendan Hansen is one of the most well-known in the swimming world, and it came to a head at the 2004 Olympic Games in Athens. In the 100-meter breaststroke final earlier in the competition, Japanese superstar Kitajima narrowly out-touched the American to take gold. After turning around to see the results, he let out primal screams of victory – screams that were said to have haunted Hansen, further fueling the hype leading into their next showdown. The pair faced off again in the 200 m breaststroke, giving Hansen a chance at redemption. Also vying for gold was the young Hungarian Daniel Gyurta – only fifteen years old in 2004, but already fast enough to challenge the veterans.

All eyes were on the middle of the pool as the 200 breaststroke final stepped up to their lanes. Kitajima exploded off the blocks, launching himself into an early lead with his powerful and smooth technique. He touched under world record pace on the first 50 in a blistering 29.10. Hansen attempted to battle back but Kitajima held him off through the 100-meter mark, though they were almost neck-and-neck with very similar metrics. Gyurta held back in seventh place with much slower splits, but he wasn’t out of the race; his strategy was to conserve energy with a relaxed stroke rate at first and then strike on the back half of the swim.

Things started to get interesting on the third length. The stroke rates of the three competitors varied considerably; Kitajima took only 16 powerful strokes, traveling a very long distance of 2.59 meters per stroke, while Gyurta ramped up his rate considerably to 1.3 seconds per stroke, taking 22 strokes. This increase in rate helped him to move up on his competitors, who continued to battle for the lead into the last turn. Coming off the wall into the final length, it was anybody’s race.

But as they charged down the pool on the last 50, it was clear Kitajima had the upper hand. For the first time during the race his stroke rate jumped above Hansen’s, all the while maintaining the greater level of efficiency he had demonstrated over the entire 200 meters with higher stroke index readings. This gave Kitajima the boost he needed in the final 15 meters to break ahead of his competitors and barrel into the finish with a powerful flurry of strokes to take gold in an Olympic record time of 2:09.44.

Hansen faded during this same stretch of pool. His stroke rate of 1.39 seconds/stroke was no match for Gyurta’s at a breakneck pace of 1.17 seconds/stroke, and the Hungarian managed to surge ahead of the American at the touch to take the silver medal. Though Hansen settled for bronze and once again had to witness the celebrations of his rival from across the Pacific, this race will go down as one of the most epic showdowns in swimming history.
­
With TritonWear, you can explore your practice with an in depth analysis every day with zero effort and track your progress throughout the season. Train smarter with TritonWear.

Courtesy of Tritonwear, a SwimSwam partner.

Does anybody know what happened to Brendan during 2004 Athens? He swam a second slower in both 100 and 200 compared to his trial times a month before, both WRs at the time. Was it mental or did he not nail his taper?

Vote Up00Vote Down Reply
All that glitters is not Gould

Who cheated in that race

Hot take: you’re wrong kitajima loved them sneaky dolphin kicks that doesn’t make him better in a way Brendan Hansen was the fastest legal breastroker at the time. Kitajima may have been able to beat him without the kicks but he did kick and we’ll never know how it could’ve gone

I was hoping they’d go into the HOF together. It’s weird to me that Hansen is going in this year and Kitajima is not.

Kitajima retired 4 years later didn’t he? Is there a waiting period before you’re eligible?

I imagine Kitajima gets in at the first opportunity, given he is significantly more accomplished then Hanson.

The rules say “Generally, athletes shall not be chosen unless retired from international competition at least four years, or at least one Olympic quadrennial”

Kitajima announced his retirement in early April, 2016. The original dates for the ISHOF ceremony this year is late April 2020. So, maybe they’re using a 4 year retirement cycle before they’ll even vote on an athlete? Rather than just having been retired 4 years before the induction ceremony?

With that kind of history, you can expect a person to go all in for the next Trials. I also think back then the double taper was a more novel concept as many people trading for Sydney 2000 were initially weary of the Trials being so close to the Games.

He hasnt yet, because no one else can, or is willing to try, to swim like him. We’ll have to wait and see how it plays out.