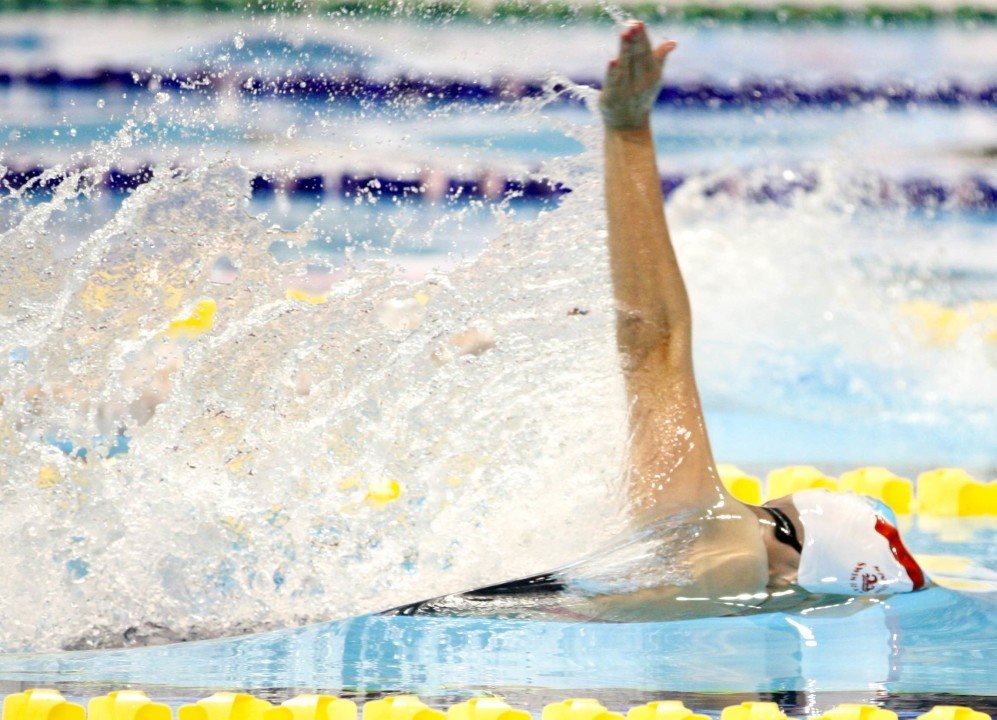 Kylie Masse will be on the hunt for her Canadian Record tonight in the 100 back after crushing the U Sport Championship Record this morning in 57.63. Archive photo via Chris Tanouye

Both fresh off gold medal performances last night, Kylie Masse of Toronto and Yuri Kisil of UBC both impressed again at day 2 prelims, breaking the U Sport Championship Record in their respective events to hold the top seed heading into tonight’s final. Masse leads the women’s 100 back field, and Kisil the men’s 50 free.

Ingrid Wilm of UBC actually broke the meet record before Masse in the 100 back, putting up a 58.63 in the second last heat to get under the 58.67 set by Katy Murdoch in 2009. One heat later, Masse clocked 57.63 for the new record. Wilm challenged Masse last night in the 50 back, finishing just 0.37 behind the Olympic bronze medalist. Masse’s national record of 56.02 is certainly within reach tonight.

In the men’s 50 free Kisil was the only man under 22 seconds, clocking 21.56 to get under Colin Russell‘s meet record of 21.73 set in 2010. He’ll have a great shot tonight at breaking Brent Hayden‘s Canadian Record of 21.34 set at 2009. His best time stands at 21.39 from the SC World Championships in December (though it doesn’t officially count as it was done in a mixed relay).

Another Olympian in action this morning was UBC’s Markus Thormeyer, taking the #2 seed in the men’s 100 back in 53.49, just a tenth behind the top seed from Calgary Robert Hill. Yuri Kisil also competed, placing 11th in 54.94 for a spot in the B-final.

Other top seeds for tonight on the women’s side are Kelsey Wog of Manitoba in the 200 breast and Montreal’s Sophie Marois in the 200 fly.

The 800 free relays will be swum with finals tonight. Finals get underway at 6 PM EST.