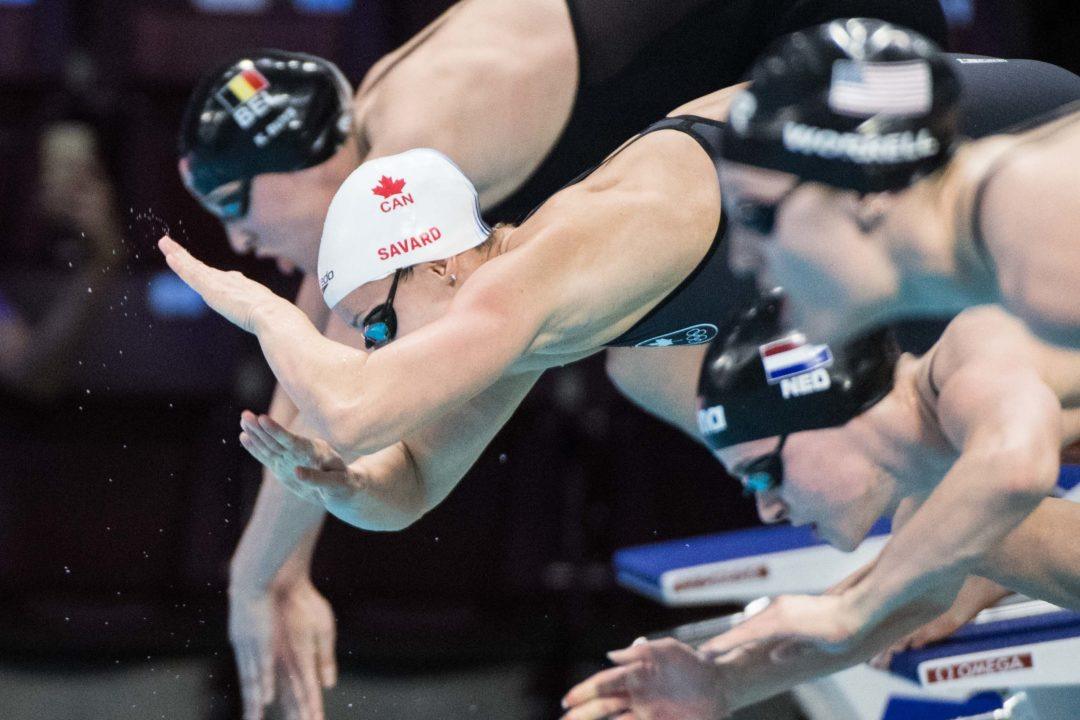 The University of Toronto men and women will be looking to defend their CIS Championship titles from the 2015-2016 season here in Sherbrooke at the U Sports Championships this week, and to do so will need to face tough opposition from their rivals at the University of British Columbia. Archive photo via Mike Lewis/Ola Vista Photography

The University of Toronto men and women will be looking to defend their CIS Championship titles from the 2015-2016 season here in Sherbrooke at the U Sports Championships this week, and to do so will need to face tough opposition from their rivals at the University of British Columbia.

Toronto is coming off some top notch results at the OUA Championships, but UBC has been incredible all season, winning their conference championships in November and putting forth a stacked team for the upcoming meet. UBC is ranked first in the U Sports rankings in the both the men’s and women’s categories whereas Toronto is ranked second in the men’s and third in the women’s behind Montreal.

Montreal is sending a very impressive team where they’ll be more than just competitive on the relays. They’re sending Canadian Olympians Katerine Savard and Sandrine Mainville. Mainville has won the 50 and 100 freestyles at the CIS Championships in previous years, and is one of the best sprinters in the nation. Savard is a worlds finalist in the butterfly events, and boasts strong freestyle swims that will add to the relays.

The stakes are high, but who looks like they’re going to win it?

The UBC men look to be the top ranked team heading into this meet. They’ve got a slew of talent on their roster and plenty of depth where other teams don’t have it to help them out.

In the freestyle, UBC looks strong. Yuri Kisil is the favorite to win both the 50 and 100 freestyles. He made the semifinals in the 100 free at the 2016 Olympic Games and has been showing strong development throughout his time at UBC. Kisil is will ahead of his competition in the 50. Likely his closest competitor will be Cameron Kidd from Toronto.

In the 100, Kisil is still well out in front. Throw in fellow Olympian Evan van Moerkerke from Guelph and rising UofT swimmer Scott McGillivray and there’s a race to be had. Also add in 2016 Olympian Markus Thormeyer and Stefan Milosevic from UBC to make the race even more competitive.

In the 200, Thormeyer looks to be the man to beat. He’s dropped a 1:45.36 this season. Temamate Keegan Zanatta will likely be in contention for a podium finish as will McGillivray and Dalhousie’s Gavin Dyke.

A tight race in both the 400 freestyle  is currently forming between UBC’s Keegan Zanatta and Calgary‘s Peter Brothers. Both have been 3:46 this season. In the 1500, it looks to be between Brothers and Eric Hedlin of Victoria. Jon McKay, also part of the UVIC distance squad, will likely be competitive in the race.

Markus Thormeyer is the top competitor in both the 100 and 200 backstrokes, however the 50 backstroke is not entirely in his hands. Chris Courtis of Calgary has the top time this season with the 24.94 he swam at SC worlds. There, he was three one-hundredths faster than Thormeyer. The two will likely battle it out in the 50. Look for Courtis to make things interesting in the 100 as well.

Nick Kostiuk of Alberta is currently ranked first in all three breaststroke events heading into his meet, but will have his hands full with other competitors. There’s multi-time CIS champion Eli Wall from Toronto who looks to be dominant in the breaststroke as well. David Riley of Western is in the mix in the 200. Look for Jonathan Ramkissoon of Waterloo to compete for a podium spot in both the 50 and the 100.

The fly events are very much up for grabs at these championships. Although he’s not ranked first in either, Coleman Allen of UBC is arguably the favorite to win the 100 fly. He’s always dominant at the CIS Championships, and the 100 fly has been one of his strongest races. Josiah Binnema of Alberta, along with Matt Dans of Toronto will be tough to beat in the 50. Montana Champagne of Ottawa has the top time this season in the 200, but Osvald Nitski of Toronto is looking strong in that race and could put forth a fight for a top podium finish.

Montana Champagne is the top ranked 200 IMer this season, but both Ryu Hochan of Toronto and David Riley of Western aren’t far behind. Jonathan Brown of UBC has also been quick this season, and should make the race that much more competitive. Josh Zakala is the top seed in the 400 IM after his 4:12 this season. Look fro Zakala to add to the mix of talent in the IM.

Freestyle – UBC is undoubtable the team to beat in the 400 free relay. They have a slew of top freestyles spanning the 50-200 distances. UT could be competitive in the 400 freestyle relay, however UBC looks to be in a league of their own in the 800.

Medley – As for the medley relay, UBC once again looks strong. Their weakest leg is the breaststroke leg, and that’s where Toronto can game some solid ground. Toronto doesn’t have the strength in the backstroke that UBC does, but with a strong breaststroke leg they can make up for that. They’re solid on butterfly and freestyle so they could be in the mix depending on the first two legs.

In the 50 and 100 freestyles 2016 Olympian Sandrine Mainville from Montreal looks to be the one to beat. She made the final in the 100 at the short course worlds this past December, and is also well ahead of her competitors in the 50. Mainville’s speed will likely carry her towards two wins here in Sherbrooke.

As for the 200, her teammate and fellow 2016 Olympian Katerine Savard looks to be one of the top competitors. She’s ranked first in U Sports right now with a 1:54, over three seconds faster than anyone else.

Danica Ludlow of Calgary appears to have a good grasp on both the 400 and 800m freestyles. She’s currently ranked first in both by a sizable margin.

Kylie Masse should be coming home titles in the 50, 100, and 200 backstrokes at the 2017 U Sports Championships. The 2016 Olympic bronze medalist in the 100 backstroke is racing the 50, 100, and 200, and is well ahead of her competitors in all three races. Danielle Hanus of Victoria and Ingrid Wilm of UBC will be putting up a tight battle for second and third in most backstroke races assuming Masse wins.

Manitoba’s Kelsey Wog is arguably the most dominant force in breaststroke at these championships. She’s got the 200 pretty much on lockdown if she can come anywhere close to her 2:18 performance from short course worlds. In the 50 and 100, she’ll have CIS Champion Erin Stamp from UBC to contend with. In the 200, her closest competitor will be 2016 Olympian Erika Seltenreich-Hodgson.

The butterfly events are Katerine Savard‘s to lose. Over the past few seasons she’s demonstrated speed over the 50-200m fly events, and has put herself in a position to sweep the discipline at these championships.

Kylie Masse will be racing the 200m IM along with the backstroke races at these championships, and will be up against 2016 Olympian from UBC Erika Seltenreich-Hodgson. Seltenreich-Hodgson specializes in the IM events, but you can never count out Masse. Masse is currently ranked first in U Sports in the 200. As for the 400, Seltenreich-Hodgson is the clear favourite to take home the win.

Freestyle – The Montreal women look very strong in the 400 freestyle relay. Boasting swimmers such as Sandrine Mainville, Arianne Mainville, and Katerine Savard, they should be one of the toughest teams to beat. Toronto and UBC will likely be in medal contention. As for the 800 free relay, it looks to be between Montreal and UBC. Montreal will likely have the edge with the two Mainville sisters and Savard, but UBC could come back with a strong swim.