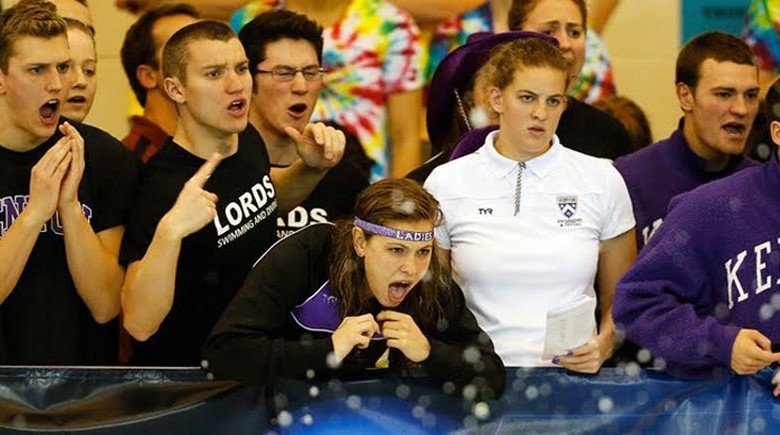 The second day of the Kenyon Winter Invitation proved to be just as quick and as much fun to watch as Day One. For host Kenyon College, though the event open auspiciously with very fast swims from both the Lords and the Ladies, the superior depth of the DI and DII teams arrayed against them led to a fourth place finish for the Ladies, and a third place finish for the Lords. On both sides, Ohio State University was victorious (795.5 women, 741 men). Current photo via Kenyon Athletics/Aaron Sprecher

The second day of the Kenyon Winter Invitation proved to be just as quick and as much fun to watch as Day One. For host Kenyon College, though the event open auspiciously with very fast swims from both the Lords and the Ladies, the superior depth of the DI and DII teams arrayed against them led to a fourth place finish for the Ladies, and a third place finish for the Lords. On both sides, Ohio State University was victorious (795.5 women, 741 men).

The morning session of the invitational opened with the 400 medley relay. The OSU team of  Zulal Zeren, Taylor Vargo, Alex Norris, and Michelle Williams were victorious, touching in at 3:47.03. As was true last night, OSU began the session with a commanding presence, collecting the top three spots on the podium with its relays. The top finishing team from Kenyon’s Ladies was the B squad of Rachel Flinn, Laura Duncan, Erika Jensen and Haley Townsend. They finished eighth in a time of 4:00.58. The A relay suffered a disqualification – otherwise its time would have taken fifth place in the final standings.

Kelly Ann Baird took a couple runner up finishes last night, but this morning had her own chance to shine as she took down the pool record in the 1000 freestyle. Baird swam a 9:58 flat to break the Shelby Fortin (Penn) set last season. She led a crew of three other OSU swimmers to a first through fourth finish. Touching in fifth was Kenyon Lady Mariah Williamson who finished in 10:25.21 – less than four seconds away from the fastest she’s been in the event this year. It’s difficult to predict based off a 1000 exactly how good of a mile a swimmer might have in a given year (as they are different animals), but Williamson seems to still be going strong, and it’ll certainly be a treat to watch her swim come NCACs.

Ashley Vance continued OSU’s domination of events in the 200 IM, leading a pack of swimmers for a first through seventh sweep. Vance was a 2:05.76. Natalie Parker featured top eight for the Ladies, finishing in 2:10.82 to finish in seventh.

The 50 freestyle went to OSU’s Williams, who finished in 23.27. She and teammate Annie Jongekrijg went 1-2. Jongekrijg was a 23.49. Kenyon’s top finisher was eighth place Jenner McLeod who touched in at 24.50 to secure her spot. McLeod grazed the B cut in the event earlier in the season, and sits seventeenth in the national ranking for DIII.

On women’s 3 meter diving, Tricia Grant of Oakland took first place honors with 271.05 points. The NCAA champion for the event last year, Maria Zarka logged 236.85 points to finish in second place for the Ladies. Grant was also the victor for one meter, with Zarka as runner up – 3:08.95 to 227.45.

OSU returned to event winning with Annie Gillig taking the 200 backstroke (2:01.45) with a cast of five other Buckeyes to claim first through sixth. The top finish in the event from the Ladies came from Flinn who logged a 2:09.14. Celia Oberholzer – who finished as runner up at NCAAs last year in this event – was in fifteenth, with a 2:09.84.

Vargo led the Buckeyes to a 1-2 finish in the 200 breaststroke. She finished up in a 2:18.17 for the victory, almost three seconds ahead of next in the field, teammate Vance. The Ladies’ Katie Kaestner was in third with a 2:22.59. Her 100 breaststroke is stronger than her 200, but it’s clear that at least part of that is inexperience in the event; Kaestner had the fastest returning split on the last 50 by over a second, and descended her 50s the way many highly competitive breaststrokers do.

OSU’s Amy Bopp controlled the 200 butterfly, taking the lead from the get-go and holding on through the end for a 2:04.17 and the victory. She was almost three seconds ahead of teammate Kaitlyn Cerne (2:06.98). Williamson of Kenyon was fourth behind the OSU triad, touching in at 2:08.93. She is currently ranked fourth in DIII in the event.

The final event of the night saw yet another record for Ohio State’s women. The 400 freestyle relay went to the team of Norris, Jongekrijg, Phoebe Carter and Williams in 3:23.67. The old record was set in the 08-09 season by Penn at 3:24.25. Kenyon’s fastest relay finished in fifth, with the team of McLeod, Townsend, Kaestner and Yarosh (3:34.11).

To start the morning off, the 400 medley relay went to the OSU team of Steven Zimmerman, Keanu Stevenson, Tim Phillips and Josh Fleagle in a time of 2:59.02. The second place team was OSU’s C relay in 3:22.64. Coming in third was Kenyon’s relay of Harrison Curley, Trevor Manz, Christian Josephson and Austin Caldwell. Manz dropped a nice 57.28 split on his 100 breaststroke leg of the relay, and Caldwell was a 44.89 to anchor.

The 1000 freestyle went to OSU’s Alex Miller who destroyed everyone. He was over a length ahead of second place Jovan Mitrovic when he touched in at 9:15.01 to claim the title. Mitrovic finished second for OSU in 9:30.59. The top finishing Lord in the event was Arthur Conover who was eighth in 9:50.41. Conover currently has the tenth fastest time in the 1000 in the country – but is the third ranked miler in DIII so far this year.

Tama Gercsak took home the gold in the 200 IM, right ahead of teammate Dimitry Dolgov, 1:51.77 to 1:52.14, respectively. The Lords put on another show of their strength in the IM events with two top eight finishers. The younger Manz put out a 1:53.80 for fifth place, while Ian Reardon swam a 1:54.51 to finish in seventh.

The Lords showed some more of their sprint event depth in the 50 freestyle. OSU’s Fleagle won the event in 20.56 with Kenyon’s Caldwell on his heels (20.78). Ryan Funk and Austin Pu also made it into the top eight, going 21.24 and 21.36 for fifth and sixth, respectively.

OSU returned to dominance after diving, sending Zimmerman out to win the 200 backstroke in 1:47.56. Curley – who is ranked number one in this event at the DIII level, and who has the only A cut in the 200 back – finished in eleventh place for the Lords, touching in at 1:54.33.

DJ MacDonald claimed the win in the 200 breast leading the way for 1-4 for OSU. The Lordds showed up en force again in this event; surprising, considering just last year Kenyon was considered to be a team without “any” breaststrokers. Trevor Manz took sixth place in 2:06.04. Alex Beckwith was seventh with a 2:07.07. Ian Reardon claimed eighth in 2:08.18.

The Lords and Ladies return to the water for fast swimming on January 31st.