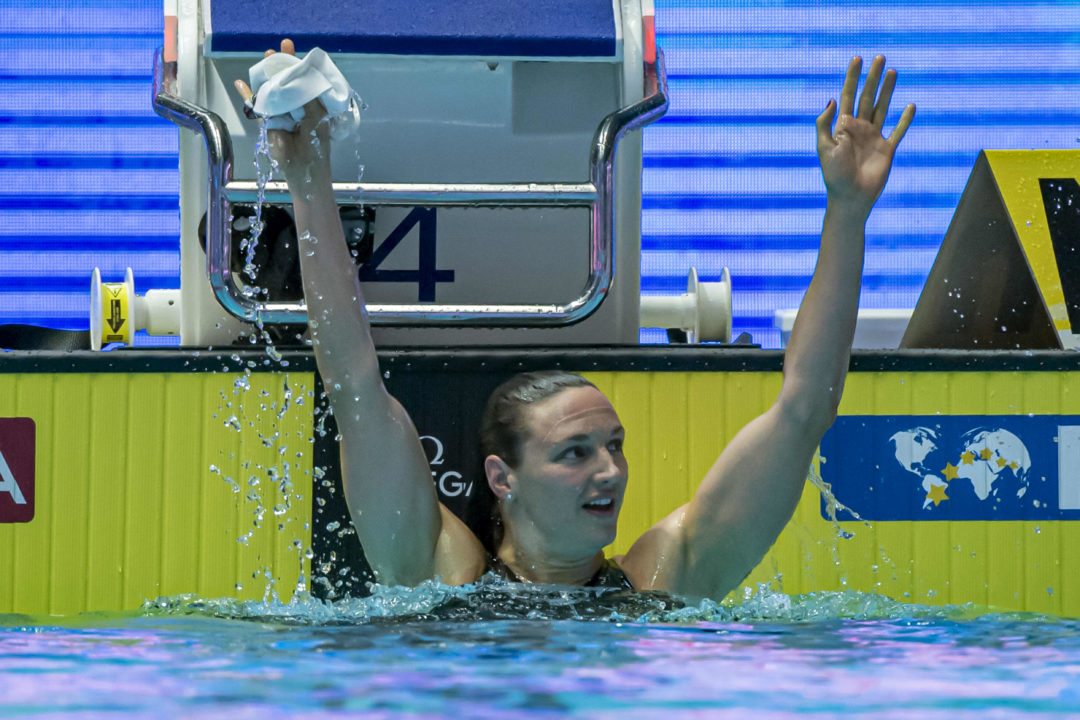 Entering day 1 of the FINA World Cup Series stop in Kazan, Russia, Olympic champion Katinka Hosszu of Hungary held 299 World Cup gold medals to her name. It was only a matter of time until the 30-year-old Iron Lady turned the ticker to the 300 mark, further building upon her legacy. And, the feat came tonight in the women’s 200m fly.

Jakabos touched just over half a second later in 2:08.76 for the silver, while Korean national record holder An Sehyeon wrangled up bronze in 2:10.69.

As for Hosszu, she trails Aussie Cate Campbell by just 3 points in the FINA World Cup overall standings heading into Kazan, with just this city and Doha, Qatar left to go. Hosszu is entered in over a dozen events here, but just the top 3 performances count towards the standings.

As a consolation, however, Hosszu will most likely put her gold medal total well over the 300 mark by the time this FINA World Cup circuit is said and done.

When she “rocked” she had more than one race per session. And 857 quality value for this race will be of no help to her in competition for bonus prize. I don’t know what made Mrs. Race to be so excited about it. Hosszu will probably select two more weak fields for two more wins that will give her bonus points and will try to perform in one of it much better than today.
But what can I say to you: the love is blind. Let her rocking (don’t know what you mean by that).

OK, you are right somewhere. But try to find another swimmer with 300 golds in an international world series.

Why should I look for another swimmer who had kilos of junk medals if I have already this one who is trying to deceive innocent fans with these inhuman super abilities. I think the only medals she cherishes are three Olympic gold medals and a few medals from world championships especially the one associated with world record. All other hundreds medals is same bs as “iron lady”. It is a pure water PR stuff. She was there for money only not for medal collection. That is what her and Tusup business plan was all about. From the very beginning, from day one of their union.

@Yozhik What do you get out of this intense criticism of her? She’s – objectively – one of the most successful female swimmers of all time. Having 300 elite gold medals is impressive, no matter how you look at it. Yet in every article she’s mentioned you blow up the comment section with your responses to her. It’s fine not to like her, it’s fine to point out all the ways in which she doesn’t live up to the hype anymore. She’s getting older, she’s swimming less races maybe, We all know that. Yet, she’s still got a more insane pensum than any other professional female swimmer her age. Is that not impressive enough to garner SOME positive vibes out… Read more »

Too much for him. Lost the question at the beginning. Don’t mind it.

You started so well and so convincingly. But ended same way as all these “wtf” style commentators. I don’t even know if you really expect me to explain anything. There is my response to SWIMFAST that was censored by Swimswam for some reason. It may answer some of your questions. Your post is long and touches a lot of issues of professional swimming. It makes no sense to respond with the posting several times longer. But I will keep them in mind and respond to your post whenever corresponding opportunity arises. Stay tuned. 😀 But thank you anyway, your questions let me think about why different people evaluate and react differently to same events. Sometimes it happens because they are… Read more »

One of the most successful female ATHLETES of all time.

another success of Hosszu as professional swimmer – giving fans so much to write about. It has to be intense feeling to spend time and energy to write long comments every time someone praise Hosszu or her name appears in article title.

What kind if junk. Those 3 olympic golds? And next year 2 more as we know well.

You are the definition of an arm chair quarterback

Is it bad or good? I am sure that you won’t be able to through the ball father than 10 yards seating in arm chair.

What I am capable of is irrelevant to my synopsis of your comments. I’ve never thrown a football (fun fact)

@yozhik. You may be like 0.01% correct but the fact of the matter is that she had already won multiple hundred gold medals in order for her to now “ease up”. She has done the work many times over…this article was not to praise her latest performance, but rather to praise her entire career…shame on you for twisting it.
Anyway… 300 gold medals, daaaamn

What exactly you are shaming me with. That I have a different interpretation or let say a different view on these 300 medals. Instead of shaming me just explain me why my opinion is incorrect or is partial only. (Look to my answer to BROWNISH). As I said before I don’t care about her at all. I am looking at facts as they are but not as we would like them to be. Believe me that I have analyzed more information about her than many Hungarians did. The only one that I was missing about her life is information stated by STEVE that she was abused and bullied until she met Shane. But when people are starting shaming me with… Read more »

She’s gifted enough to be able to enter the “weaker” events at meets because she’s great at all four strokes and also savvy enough to foresee all of the entries ahead of time. It is definitely a game, but she’s still the talent behind it. This is pretty darn legendary and is an achievement, whether you like it or not- even if you see it as simply a PR move. Sometimes you need to be a big fish in a small pond to succeed- no one could possibly win 300 gold medals at a series in less than 15 years unless they swam some weakly contested events sometimes. She still nevertheless swam the races and oftentimes pretty darn fast. This… Read more »

By yozhik’s logic if you don’t get lots of Fina points (a flawed system) and don’t perform at your peak everytime you swim, you are a failure. He has said as much in his criticism about the ISL since he doesn’t actually enjoy watching people race.

You completely misunderstood my logic. Or just want to say something not nice about me because it brings you some pleasure. I don’t mind at all. Go ahead. Enjoy. But if you make some effort to follow this logic then you will understand hopefully that somebody is trying to sell you some nicely wrapped bs and you are willing to buy it because a lot of other people bought it already. But you have no reliable information to make your own judgment. I don’t criticize Hosszu for slow performance in the long running tournaments like Word Cup and ISL where almost everybody are slow because of the specific of these tournaments: long and out of season. But I don’t see… Read more »

Yozhik, you remind me of joe

What is your reliable information that we don’t have?

Got it from Rudy G.

Shane is that you??

The Katinka + Jakabos duo will not have much opposition in 400 IM tomorrow either. What happened the Tusup team? I read that Tusup applied late and did not get the Russian visa (at least not in time). Did the same happened to the whole team? Cusinato was in the entry list, but not in the start-list. .

One of the male swimmers left hím, and Cusinato removed all pix from her instagram site too, so most probably she leaves as well.

Hosszu will likely make an effort for higher points in 200 IM, morning or afternoon. Right now 200 fly and 400 IM WRs are both too good to scare anywhere close to 950 Fina pts.

Tell me which LCM record in women swimming is soft? We are blessed to see such a great swimmers like LEDEKY, SJOSTROM, KING, SMITH and hosszu. Plus two crazy 2009 records.

What do you meen in Smith’s record, body?

I didn’t get your question. I meant world records in 100 and 200 back. She made them very tough..