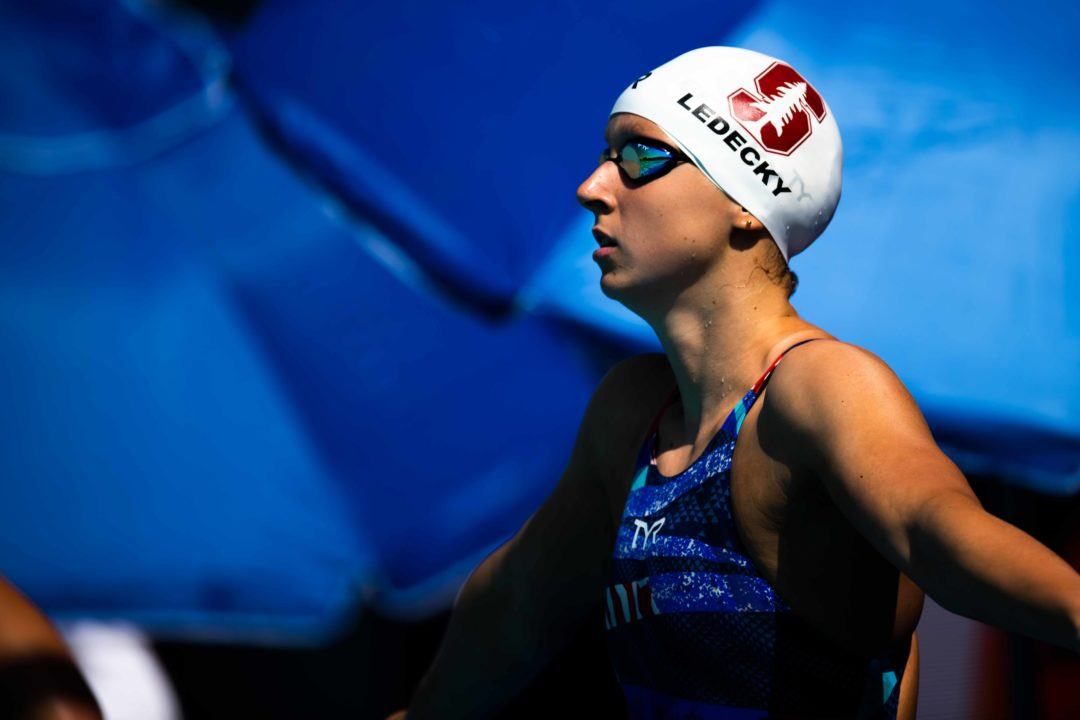 After scratching the 200 free prelims and 1500 free final due to illness, the USA's Katie Ledecky will return to competition tonight in Gwangju. Archive photo via Mike Lewis/Ola Vista Photography

After scratching the 200 free prelims and 1500 free final due to illness, the USA’s Katie Ledecky will return to competition tonight in Gwangju at the 2019 FINA World Championships. Ledecky will swim the 2nd leg of tonight’s relay.

After taking silver in the 400 free on night 1 of the meet, her first international distance loss, Ledecky swam prelims of the 1500 free and led the way into finals. She later pulled out of prelims of the 200 free and scratched out of that 1500 final. According to Coach Greg Meehan, Ledecky became ill before the start of the meet and was having trouble keeping food down. FINA has also issued a warning memo about illness spreading at Worlds.

After scratching events earlier in the meet, Meehan stated that getting Ledecky back into the meet “at some point” would be ideal. Ledecky will swim tonight’s relay and then determine if she’s well enough to swim the 800 free individually. Meehan alluded to Ledecky’s race finishes when speaking of her illness. He said she was “having a hard time” in the closing 500 of the mile and that her closing speed on the 400 free was a “little bit of a sign” of her not feeling well. However, Ledecky is feeling “well enough” for the relay.

If she swims the 800 free later on, she’ll be seeking her 4th-straight title in the event. She’s the World Record holder in that event and a 2-time Olympic champion, having won the race in London (2012) and most recently in Rio (2016). Aussie Ariarne Titmus, who pulled off the upset over Ledecky in the 400 free, will also be in that race.

Sign of a great teammate right there. Everyone would of understood if she took the rest of the meet off, but obviously she thinks the relay needs her help (which is does). Whether she swims a 1:54 or a 1:58, I appreciate her unselfishness. Another reason why I love Ledecky.

Glad she is better now