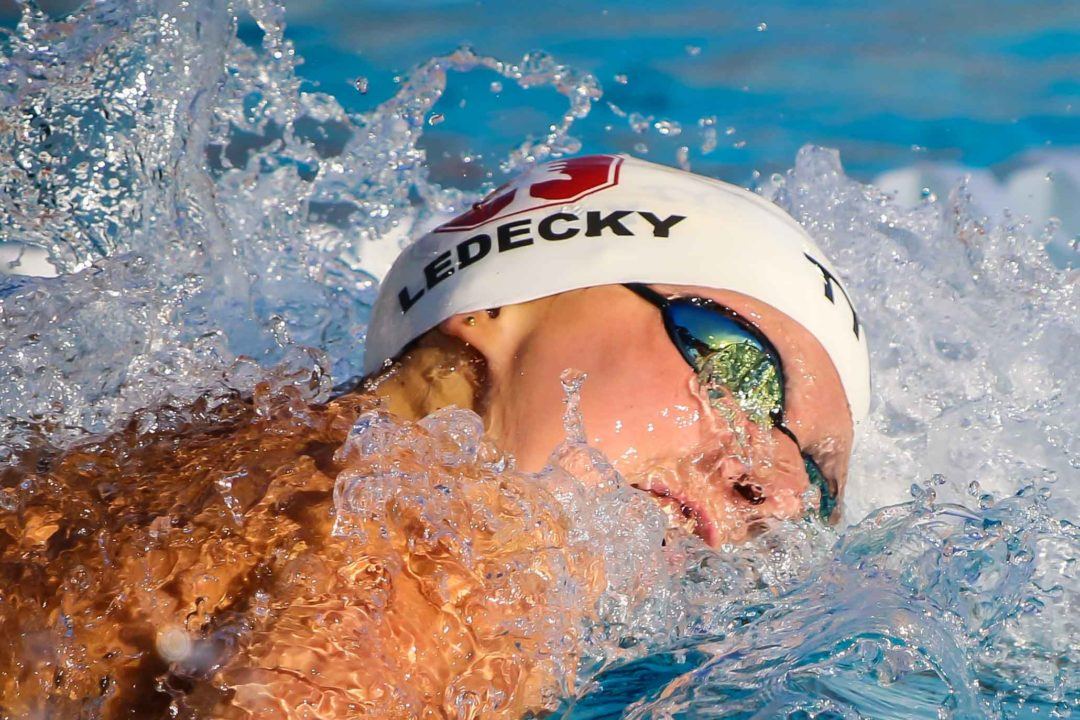 Ledecky's 5th award ties her with Michael Phelps for the most since the award was first given in 1981. Archive photo via Jack Spitser/Spitser Photography

American swimmer Katie Ledecky has been named the USA Swimming Swimmers of the Year at Saturday evening’s awards banquet at the United States Aquatic Sports Convention. The award has been voted on by the USA Swimming House of Delegates and given since 1981 – and is different than the equivalent Golden Goggles award. Only one award is given, rather than one to each gender.

For Ledecky, this is a 5th win: she won from 2013-2016, before Caeleb Dressel broke her streak last season. That ties her with Michael Phelps for the most times being named the recipient of this award. No other female swimmer has won the award more than twice, and Ledecky’s win makes 15 female winners in 39 years of the award.

In the 2017-2018 season, Ledecky won 5 medals at USA Swimming’s ‘Operation Gold’ meet – the Pan Pacific Swimming Championships. She won gold in the 400, 800, and 1500 meter freesyles, silver in the 800 free relay, and bronze in the 200 free individually. En route to the big championship meets at the end of the summer, she started her pro career with a World Record in the 1500 free at the PSS-Indianapolis meet: the first swim of her professional career. That helped carry her to an overall series win in the Pro Swim Series standings, which included a $10,000 bonus and year-long lease of a BMW.

Phelps would have won like 10 times if the award would have been awarded earlier….

He probably would’ve won more Golden Goggles Awards if they had been given sooner, I agree with that, but this sis a different award that has been given out since 1981.

I would love to see her compete with the men.

Why no coach of the year award?

Read the article again….Andrew Baranco won coach of the year

I believe that is para coach of the year named after Jimi Flowers (rip my friend). There is usually an overall COY for Sr level (National Team) coaches.