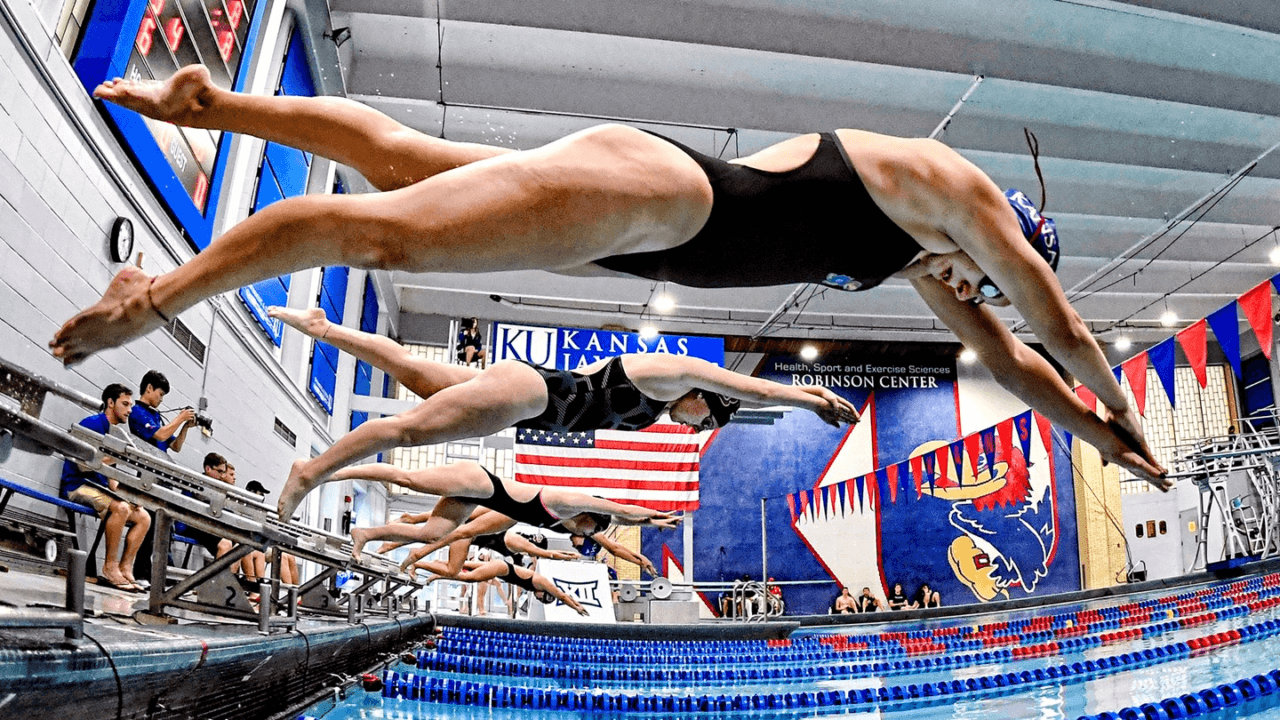 Kansas won both relays and all 12 individual swimming events in a crushing defeat of TCU on Saturday, October 27th. TCU’s lone wins came from Izzy Ashdown, who won the 1 meter diving with a score of 275.85, and 3 meter with a score of 281.85.

LAWRENCE, Kan.  – For the second meet in a row, Kansas swim and dive came out of the blocks fast and continued to gain momentum as the Jayhawks defeated TCU in the first dual meet of the season on Saturday afternoon inside Robinson Natatorium.

The Jayhawks set the tone with the first event and never let up, downing the Horned Frogs with a score of 206.5-92.5. Saturday afternoon started off with a quick win and the trend continued from there. The Jayhawks swam their way to gold in all 14 swimming event of the afternoon and swept the top-three places in five of those events. A total of 34 Jayhawks stood on the top-three podium at the conclusion of the dual, eight of whom were freshmen.

QUOTES
Head coach Clark Campbell
How KU won all swimming events:
“We came out really focused. With all of the hard training we have been doing, it is really important that you have to let the mind take over. With the training we are doing Monday through Friday, the racing can go one of two ways, you either have a good meet or not a good meet. So after a good week of training, you really need to get the mind focused, zoned in and ready to preform. I thought for the most part about 80 percent of us were ready to do that. We got off to a good start and just kept the ball rolling like we did a couple of weeks ago.”

With it being the middle of ‘Rocktober’:
“From a competition standpoint, I can’t be more pleased because our focus has been really good and to top it off with the races that we have been doing lately it has proven to them that they are tough mentally and physically.”

Any race in particular that stood out:
“There were several. Crissie Blomquist had two races that were better than ever, that was her best dual meet that she has had. I think the hard training that we do really benefits her and she has been killing it in workout and it has carried over into the meet. And Kate Steward, for her first meet back after she has been working really hard with her injury, we are not all the way there yet, but it was a great way to start her collegiate career. Can’t really start it any better than she did, she is definitely a performer.”

What they are looking at for their Nebraska meet next week:
“We still have two more weeks of hard training before we rest a little for our mid-season meet. We need to finish up the power phase well and go into an environment where there will be a lot of adversity and it is going to be tough. It has been a long rivalry with Nebraska and both teams really get up for competing against each other.”

Freshman Kate Steward
How it felt getting back in after an injury:
It felt really good. One of my favorite parts about swimming is the racing, so it is fun to be able to do that again and contribute to the scores and the team.”

Walking away with three individual wins:
“It builds a lot of confidence because I really didn’t know going into this meet how it was going to turn out, so being able to swim and have solid times for right now, I’m really happy.”

Goals moving forward:
“We have a lot of team goals, like getting a bunch of people to NCAAs and I hope that I will be able tot be a part of that. We always chase conference, so getting as close to Texas as we can. Those are my top goals and that would include top-eight at Big 12’s, maybe even top-three.”

UP NEXT
The Jayhawks hit the road for their first away meet of the season Saturday, Nov. 3, as they travel to Lincoln, Nebraska to face the Cornhuskers in dual action at 2 p.m.

LAWRENCE, Kan. – TCU’s women’s swimming and diving team opened conference competition with a loss against Kansas on Saturday, 92.5-206.5. Despite the loss, TCU had a strong performance on the diving boards with a pair of wins and three NCAA Zone Cuts.

ON THE BOARDS
Isabella Ashdown continued her success in her debut season for TCU. The sophomore from Sydney, Australia, swept both one and three-meter dives and earned a pair of NCAA zone cuts with scores of 275.85 and 281.85. Connie Deighton finished second in both diving events, finishing with a one-meter score of 271.05 and a three-meter score of 265.58. Deighton’s one-meter score earned her a NCAA Zone cut as well. Grace Newell rounded out the one-meter dive sweep with a third-place score of 234.45. Ashdown and Deighton are the first Horned Frogs since the 2014-2015 season to earn NCAA Zone cuts.

“Very proud of where the girls are right now,” TCU diving coach Anthony Crowder said. “I’m looking forward to getting back to work as we continue to focus on the details to prepare us for the end of the season.”