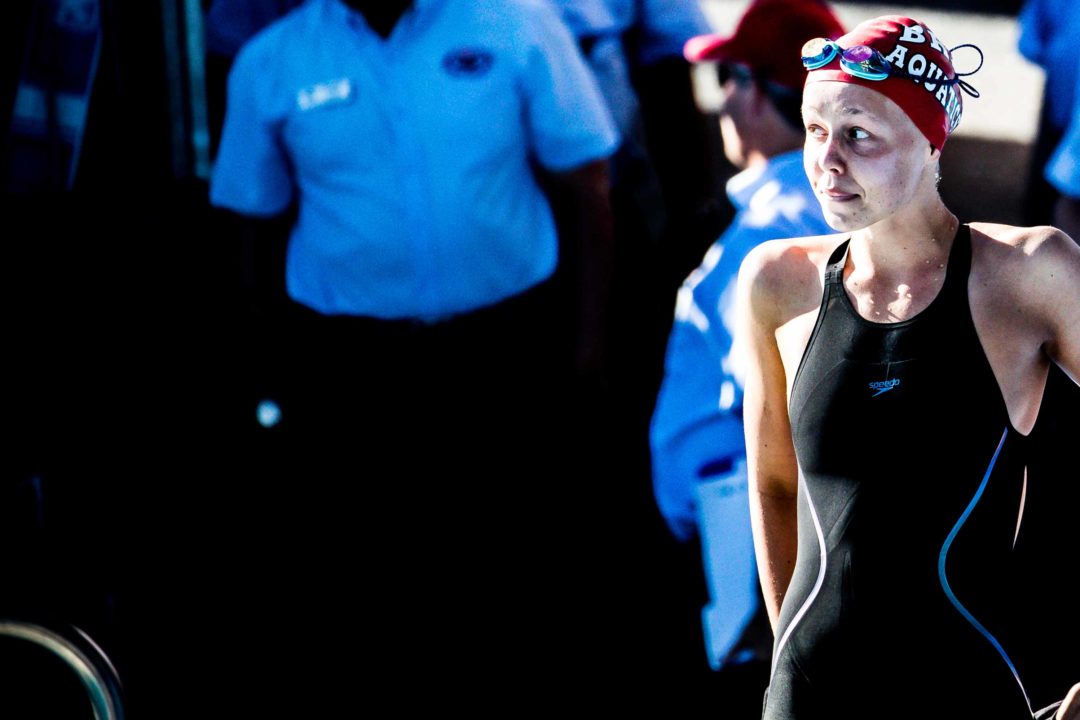 Kozan, a two-time World Junior Championship gold medalist, moved to Mission Viejo so she could resume her training during the COVID-19 pandemic. Archive photo via Jack Spitser/Spitser Photography

Various restrictions in different states, cities and counties left swim clubs across the United States in a variety of circumstances regarding when they would be able to return to a relatively normal practice schedule.

For Justina Kozan, one of the top age group swimmers in the country, this left her without a place to train at her home club, BREA Aquatics. So Kozan, 16, made the switch to the nearby Mission Viejo Nadadores, who were among the first teams back in the water in early May.

“I looked at several different teams, and I decided on Mission Viejo because they had more pool time and great competition at practice,” Kozan told SwimSwam. “My parents were involved, but I made the final decision. It was very hard leaving BREA, and I will always be thankful for coach Jim (Johnson) and my teammates.”

A two-time World Junior Championship gold medalist in the 200 IM and 4×200 free relay, Kozan had her first practice with her new club during the last week in May, also making the move to Mission Viejo to avoid the 45-minute commute. Previously attending Walnut High School, Kozan will now attend Santa Margarita for her final two years of high school.

In regards to whether she would have made this move if it wasn’t for COVID-19, Kozan said: “I don’t think I would since the Olympics were supposed to be this summer and changing teams right before the Olympics would be too big a change. But I am pleased about my decision to join Mission Viejo.”

So far, under head coach Mark Schubert, Kozan is keeping a very busy training schedule with 10 two-hour practices per week. She is also enjoying how the team uses equipment more frequently than she’s used to.

Kozan boasts incredible versatility across all four strokes, and came in at #3 on our “Way Too Early” recruit rankings for the high school class of 2022. She’s also the fastest 400 IMer currently in the class with a best time of 4:05.67 (SCY). That versatility also translates over to the long course pool, including wins in the 200 free, 200 fly and 200 IM at the 2019 U.S. Junior Championships to go along with her success at World Juniors.

Kozan is unsure when she and the Nadadores will be able to return to competition but anxiously awaits her next opportunity.

“I hope we will be able to race soon,” she said. “I am looking forward to the first major competition, the TYR Pro Series in Irvine (which will run Nov.12-16).”

“Jumping clubs” seems a little harsh under the circumstances.

As I read it the intention was to switch clubs eventually even without COVID (most likely being after Olympic trials.)But regardless, the reason seems fine, I just don’t think reporting on it is necessary. It’s always going to make the club the swimmer is leaving look bad and I don’t think it’s healthy for age group swimming as a whole for things like this to be reported on. Leave it for college and pro’s.

I could be being overly sensitive which is why I included a sarcastic “pc police” quip, but that’s how I feel.

So, you were kind of kidding, but not really…

It worked for Regan Smith.

Wishing her the best in her future endeavors!!

So it appears at least 3 readers do not wish her the best in her future and the endeavors. Really? Guess when you are that good you pick up some haters along the way. Seriously weak.

No it is likely a sentiment towards a / any smaller club that developes a swimmer to a high standard ; then cannot offer water time because they are not connected.. It is a nod t o all the clubs in a Covid19 situation across the US.

Justina and her family are great people and I wish them nothing but the best. Are they still practicing? Word is five OC-based clubs were instructed by the county to stop holding practices.

We’re still in the pool.