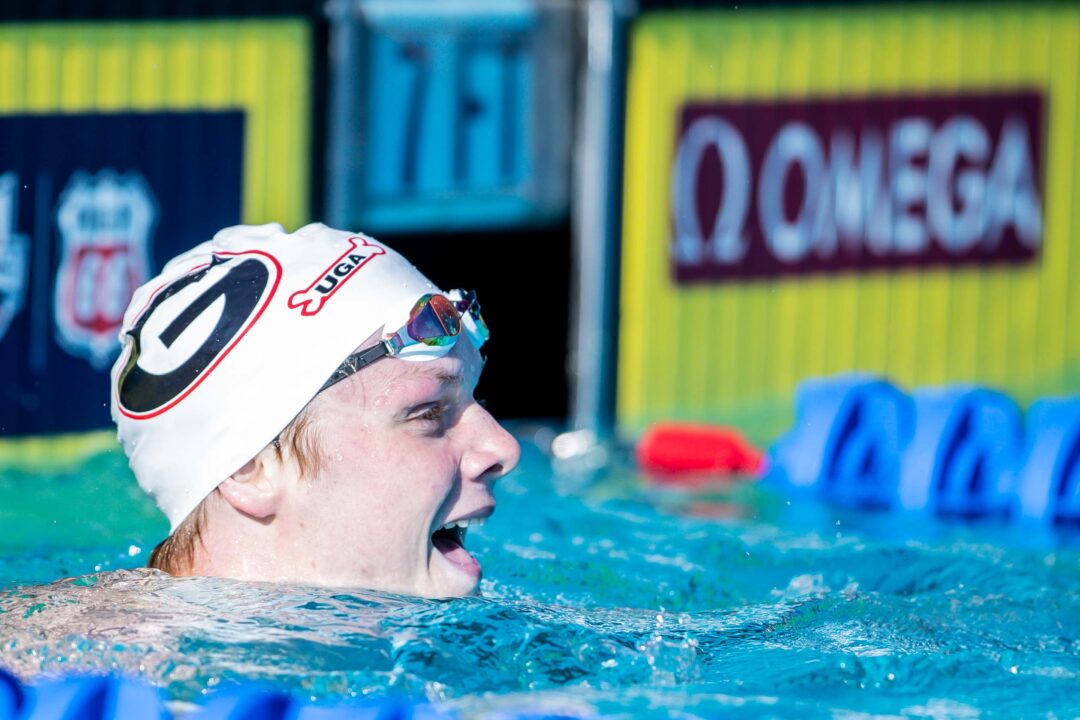 Georgia junior Jake Magahey put up a blistering time of 4:12.91 in the men's 500 free prelims, ranking him first in the country this season. Archive photo via Jack Spitser/Spitser Photography

The heavy hitters came to play during the opening session of the UGA Fall Invite, as Florida’s Josh Liendo and Georgia’s Jake Magahey put up some blistering times at the Gabrielsen Natatorium Thursday morning.

Liendo, a Canadian freshman who entered this week as the fastest man in the 50 free this season at 19.27, clocked 18.83 in the heats to mark a new personal best time by over four-tenths while also producing a time that would’ve made the ‘A’ final at last season’s NCAAs and going under the NCAA ‘A’ cut of 18.88.

Liendo’s time overtakes the 18.94 Brooks Curry produced on Wednesday night at the Art Adamson Invite, but trails the 18.68 clocked by Jordan Crooks at the Tennessee Invite this morning.

In the 500 free, Georgia’s Jake Magahey posted a time of 4:12.91 to take over the top time in the nation, surpassing the 4:14.34 done by Alabama’s Victor Johansson last night at Art Adamson.

Another highlight from the session came in the women’s 50 free, where Georgia sophomore Eboni McCarty joined the sub-22 club in a time of 21.91. McCarty’s time improves on her previous best of 22.10, and makes her the seventh woman under 22 seconds this season—with four having done so at the Tennessee Invite this morning and two last night at Art Adamson.

Florida’s Katie Mack was a distant second in 22.36.

Man it’s not even Friday yet and there’s already 2 guys under 19 seconds..

Didn’t even catch crooks one and wow he’s only .02 off Dressel’s mid season record this morning. Whatever happens tonight were likely going to see some sort of history made.

18.68 tonight is my prediction

I severely underestimated Josh Liendo’s yards speed in the 50, let’s see if he can further develop his 100s.

At this point though, I’d like to see a little more out of chaney.

Florida is going to have some deadly 200 relays at NCs that’s for sure.

Yeah, I’ve been flip flopping in my mind who has the advantage at NCs in 200 medley relay.

I feel like Chaney just gets better as sessions go on. I expect him to be 19.0 tonight and 18.7 by March.