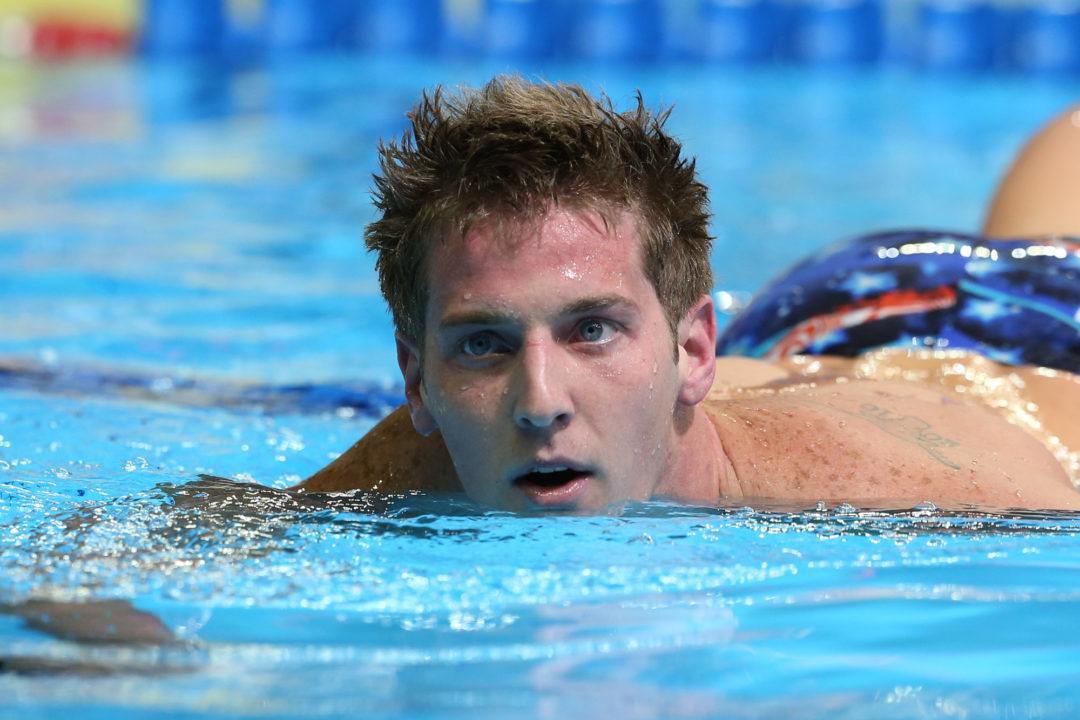 Jimmy Feigen answered submitted questions earlier this week in a Reddit 'AMA,' at one point mentioning that he does not plan to compete in Tokyo. Current photo via Tim Binning/TheSwimPictures.com

(For context, it is worth noting that this all took place before Feigen, Gunnar Bentz, Jack Conger, and Ryan Lochte were robbed at gunpoint this morning. Besides being forced to hand over their money and Lochte’s wallet, all four were unharmed.)

An “AMA” is a Reddit feature that stands for “Ask Me Anything.” Celebrities, athletes, politicians or even just regular people with interesting jobs or experiences will post a thread inviting users to ask them anything. The results are often unpredictable and wide-ranging in topic, but do provide a more personal level of fan interaction than traditional Q&As.

When asked “do you plan on this being your last year, or do you plan on trying to be back for Japan,” Feigen answered that he “will not be in Tokyo competing.”

You can find the full Jimmy Feigen AMA thread here.

We’ve also pulled some of the answers that might interest SwimSwam readers here.

Q: Are the living conditions in [the] Olympic village as bad as they say?

A: No not at all I think the media tried to make that a story and ran with it. My living conditions, although small, seem to be pretty good. From the other athletes from different countries I talk to they seem to be fine as well. There were some kinks to get through at the beginning but by and large the village has been extremely livable.

Q: Congrats on your gold and thank you for taking the time to do this! What’s been your favourite moment in the pool and the Olympics in general so far?

Watching as Nathan finish to win our relay gold was the coolest moment. I can’t explain what its like to know you were a part of a gold medal relay at the Olympics but I’m sure you can imagine. Seeing my mom and giving her the most meaningful hug I’ve ever given her was emotional. She’s been through the ringer just as much, if not more so than I. That gold medal is 70% hers.

Q: Do you get sick of people always talking about Michael Phelps when you tell them you’re an Olympic swimmer?

A: Hah it comes with the territory. I like answering questions of which I have knowledge. But I sure do get a lot of. DO YOU KNOW MICHAEL PHELPS?? Like yes dude that’s what happens when your on the same Olympic team????

Q: Saw that you’re rooming with both Lochte and Phelps. How does US Swimming determine roommates? And are the rooms handled by countries or IOC/FINA? Do swimmers that are the only ones for their country get their own rooms?

A: All countries basically get their own rooms together. USA is huge so we get a whole building. We get to choose our roommates so Phelps, Connor [Dwyer], Chase [Kalisz], Ryan [Lochte], Plummer, and I knew we got along together so it was a good fit.

Q: Have you felt a huge difference between the London Olympics and the Rio Olympics in general and for you personally?

A: Yes absolutely. I’m a veteran now so I know way more people. People come to me with questions and I can actually answer them. Its been fun taking a more proactive role in this Olympics rather than just being along for the ride in London.

Q: So who on the Team USA is single? Please tell me Nathan Adrian is. Also how do most of Team USA feel about Phelps? We would love to hear more about Team USA but NBC only shows Phelps and Boomer and his wife or whatnot.

A: Most people are dating someone. Everyone else is bumble-ing Nathan is not. Conor Dwyer is. Jay Litherland. The girls are mostly all taken. Jack Conger is also. Haha I’m sitting with everyone now asking them ????

Good luck with the next move in your career!

FEIGEN did the best Reddit AMA.
He answered almost every question! I wished I’d known about it beforehand 🙁

Mr Feigen seems to be a fun guy.
I think the relay teammates are invaluable and should get more attention than they do.
With internet and non-mainstream media, we can find out more about these great athletes, but I do think NBC etc should highlight alternates or non-Medal winners more than they do.