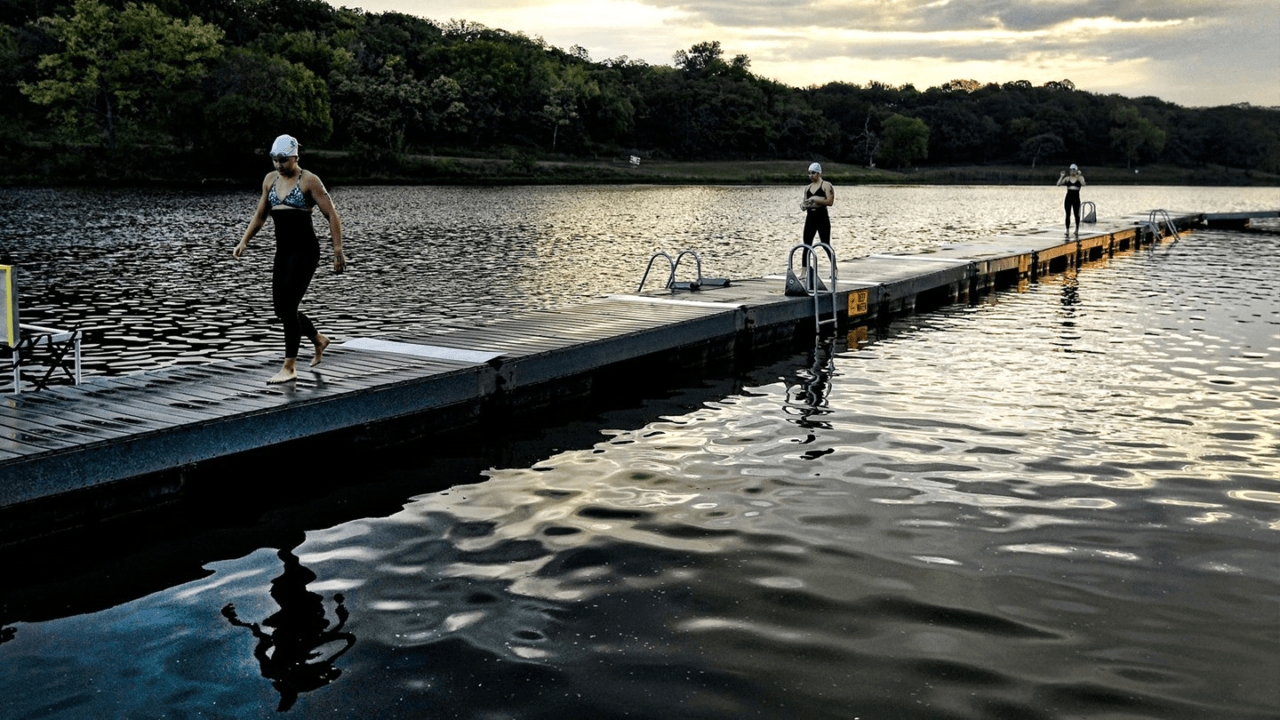 The best long-distance swimmers from across the nation will come together at Lone Star Lake for the third-annual College Swimming Coaches Association of America (CSCAA) National Open Water Championships, Saturday, September 22.

LAWRENCE, Kan. – The best long-distance swimmers from across the nation will come together at Lone Star Lake for the third-annual College Swimming Coaches Association of America (CSCAA) National Open Water Championships, Saturday, September 22.

A total of 137 athletes will set the pace for this year’s race, consisting of 71 female and 66 male swimmers, nearly doubling the 72 total athletes participating two years ago at the first-ever Open Water Championships.

“It is the third year for this championship and the numbers have really sprung up for this year’s race,” head coach Clark Campbell said. “It is scheduled a week later than the previous year so we have had that extra week of preparation, which will be good for our three new swimmers and three veterans to this race.”

Six Kansas swimmers will be participating in Saturday’s race. Junior Jenny Nusbaum and senior Haley Bishop will be undergoing the Open Water Championships for the third time in a row after both finishing last year with times of 1:05:26.60 and 1:05:33.51, respectively.

“This is a really fun thing for me to do,” Bishop said. “I swim the 50-yard freestyle in season and the other short races, so starting out the season with a long race for the third year in a row is fun and different. I am able to see what shape I am in and switch it up.”

Much like Bishop, the open water swim is a fun way for Nusbaum to engage herself in something different that was new to her when she first conquered the race as a freshman.

“I had never done an open water swim going into this as a freshman two years ago,” Nusbaum said. “Since then, I have done a lot more distance training and it is a lot more fun now to get the opportunity to do this. I can’t wait to see what the atmosphere is going to be like this year.”

Of the four other remaining Jayhawks competing Saturday morning, three of them – freshmen Katie Callahan and Claire Campbell, and sophomore Crissie Blomquist –  will be new to the event. Sophomore Lauryn Parrish was a first-timer last year, ending the race in a stirring fourth-place finish (1:05:02.27).

“I had no idea what to expect last year even though I had done open water swims before and really liked it,” Parrish said. “It is really nice that we have the opportunity to go out to the lake and I feel more relaxed going into this swim this year, but there is only so much you can do out at the lake before you actually race it.”

The amount of technique and strategy that the swimmers have been putting in as they prepare for the race has gotten them as close as they can get before the start of the race Saturday morning.

“Swimming in the open water is just a part of what the freshmen will encounter,” Parrish said. “We all will have five other people swimming beside you to starting with 70 other people trying to get ahead of you.”

A great deal of mental awareness is something to add to the strategy that goes into this type of race, something Bishop, as a senior, sees in this group.

“Our team is so mentally tough and that is a lot of what it is and we have a big advantage with that going into the race on Saturday,” Bishop said. “It is a small group of us, but it is a tough group of us, and it is different. I think that is the most exciting thing.”

Admission is free and fans are encouraged to come out to Lone Star Lake Saturday morning to support the team. Parking will be available in the lot above the beach and access to the shoreline and road will be nearby using the staircase.

Hey,
Is there a live stream?