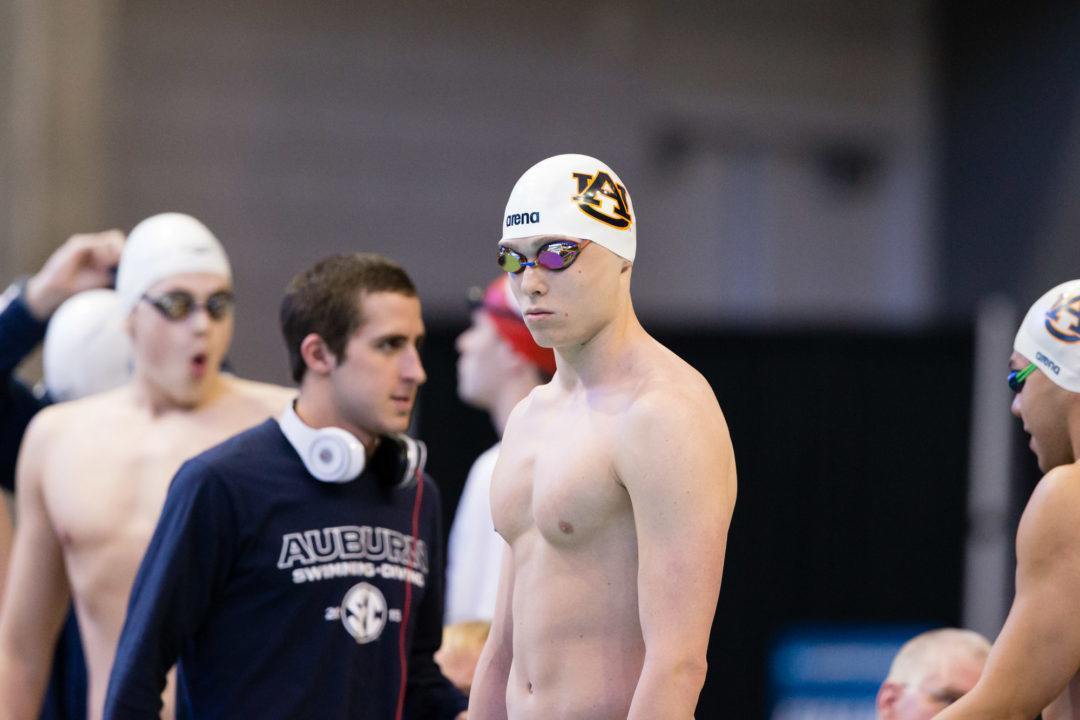 Jacob Molacek will leave the Auburn swimming program after two seasons, sources close to the family have confirmed. Molacek has... Archive photo via Tim Binning/TheSwimPictures.com

Jacob Molacek will leave the Auburn swimming program after two seasons, sources close to the family have confirmed. Molacek has decided to leave the Auburn program, but is still weighing his options about the future, with sitting out a season being a possibility.

Molacek came to Auburn as the National High School Record holder in the 100 breaststroke, but during his sophomore year had his biggest impact for the Tigers as a sprint freestyler. He swam on the team’s scoring 200 and 400 free relays at the 2016 NCAA Championships that were 6th and 7th, respectively. That included an 18.98 split in finals of the 200 free relay.

After a successful freshman year that saw him qualify for NCAAs individually, his times faltered during his sophomore season. His season best in the 100 breaststroke at the 2016 SEC Championships was a 53.88: more than a second short of his lifetime best of 52.45 done a year earlier.

Wherever Molacek lands, he could fill a number of roles. He doesn’t have a weak stroke, including lifetime bests of 48.1 and 48.2 in the 100 fly and 100 back during his high school career.

This summer, Molacek has returned home to Omaha and is training with Tom Beck and Greater Omaha Aquatics, the club he swam for during his high school career. He swam at the Omaha Cup this past weekend, the official Olympic Trials warm-up meet, with meet-bests of:

Auburn will return senior breaststroker Michael Duderstadt, who had the 9th-fastest 100 yard breaststroke in the country last season (51.94). Molacek is now the only swimmer they’ll lose from their 200 free relay.

The Tigers bring in sprinter Colin Bone (20.91/44.86) this fall to help back-fill the program’s sprint group.

I heard it was the coaching staff.

There’s been quite a few men leaving the Auburn team this past year, what’s going on there?

It’s all the coach.

Any word where he’s considering?