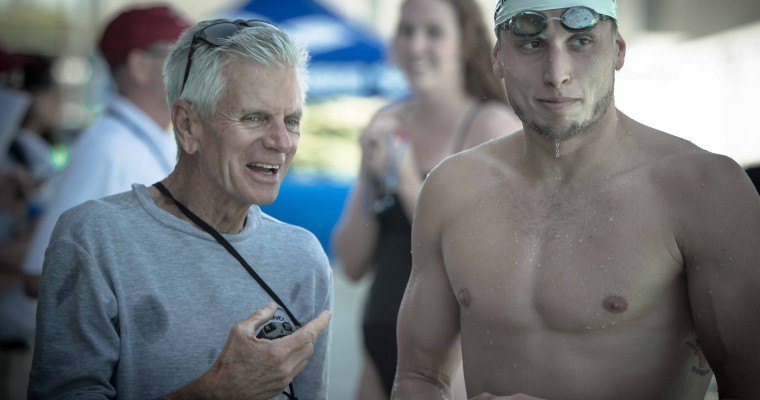 USA Swimming's Jack Roach will be jumping to the club realm, taking over as CEO and head coach of Virginia's Tide Swimming. Archive photo via Mike Lewis/Ola Vista Photography

USA Swimming’s Jack Roach will be jumping to the club realm, taking over as CEO and head coach of Virginia’s Tide Swimming.

Roach has been a pillar of USA Swimming’s coaching staff for years, and was named the head coach of USA Swimming’s National Junior Team in 2008. In the lead-up to the Rio Olympics, he moved into a role as USA Swimming’s Consultant of Athlete and Coach Relations, and also moved from Colorado to Virginia, where his wife was accepted into medical school.

He will remain in that USA consulting role until January 1, 2017, according to an announcement from Tide Swimming, but will be working with the club’s assistants until taking over the position full-time at the start of 2017.

Beyond coaching, Roach is a veteran of the United States Marine Corps and is a recipient of the Purple Heart Award.

Here’s an excerpt of the announcement from Tide Swimming:

Jack Roach will assume the full time role as CEO/Head Coach of Tide Swimming on January 1, 2017.  His role with USA Swimming necessitates him to continue his involvement with USA Swimming staff, coaches, and athletes until Jan 1.  Between now and January, Jack will be working closely and on a limited basis with Associate Head Coaches Sandra Jones and Richard Hunter as well as with the rest of the staff to chart the direction for our team.   Jack will work most closely with Coach Richard and Coach Drew in the Senior program, along with involvement by Coach Tage, given the leadership role she played this summer with Senior 2/3 athletes as well as the work she is doing to prepare Regional 2 swimmers for the Senior program.  Coach Tage will continue her leadership role as Developmental Program Director at Hilltop.

Jack led and worked closely with the search committee to select Richard Hunter as the Associate Head Coach.

Jack Roach has over 35 years of coaching experience and is perhaps one of the most accomplished and experienced coaches in USA Swimming.  Throughout his long coaching career, Jack has gained experience at every level of swimming – club, age group and senior, college, the USA National and USA National Junior Teams and the USA Olympic team in 2008, 2012, and 2016.

Jack Roach, a former beach lifeguard and Marine, served as Head Age Group and Junior National coach at Mission Bay Aquatics from 1986-1990 alongside legendary coach Mark Schubert.  Together they won nine national team titles from 1986-1989.  Jack served as an Assistant coach at the University of Texas women’s swimming team from 1990-2000.  The UT women won two national championships and were runner up once during his tenure as Assistant coach.  Simultaneously, he served as Head Coach and Director of the USA Swimming Club Texas Aquatics in Austin, Texas.  Jack coached from 2003-2008 in Mexico as Head Coach and Aquatics Director at La Loma Centro Deportivo.  He coached the Mexico National Team and also hosted top international coaches and swimmers for training camps at La Loma.  In 2008 Jack was named the National Junior Team Program Director at USA Swimming.  Talk with any of the top US coaches and they will point to the creation, administration and execution of this National Junior Team concept as a key to the United State’s success in London and Rio.

Ask any of the usas best swimmers from Michael Phelps to national junior teamers. Jack Roach has a gift. Whether coaching national team athletes without their personal coach in workouts at the OTC or looking after swimmers at international travel trips, Jack has helped our best get better in everything from short to long, regardless of their background. His motivational talks to coaches and swimmers have been moving and effective, this is a huge loss to USA swimming.

He will be working with one of the best coaches ever, Richard Hunter.

Congrats Jack!! The Tide is a lucky team!

What happened to Josh Fulton?

He was replaced by a friend of a Board member of Tide. Josh Fulton wouldn’t play into the hands of the powers who be. Never mind that he produced nationally ranked swimmers and put Tide on the map. Never mind that a petition was started and signed by close to a hundred swimmers to keep Josh. Josh is going to be sorely missed on our team. Good luck in your new adventure.

Don’t forgot Tides 25 year history of mediocre swimming. In 5 years they became one of the most consistent producers of National talent in the LSC

This is an all too familiar occurrence these days in USA Swimming. I wish the best of luck to Josh.

Coach Roach is a fantastic guy…Was a great coach at Mission Bay. Good for him.

Congrats Jack. From one Grace Park Pool alum to another.

Totally not fair! What about Nova?

I think nova will be ok, they have a HC that’s actually done some real hands on coaching in the last 20 years and developed a world class Swim program

Agreed, nova has a great head coach and a stable of talented assistants.