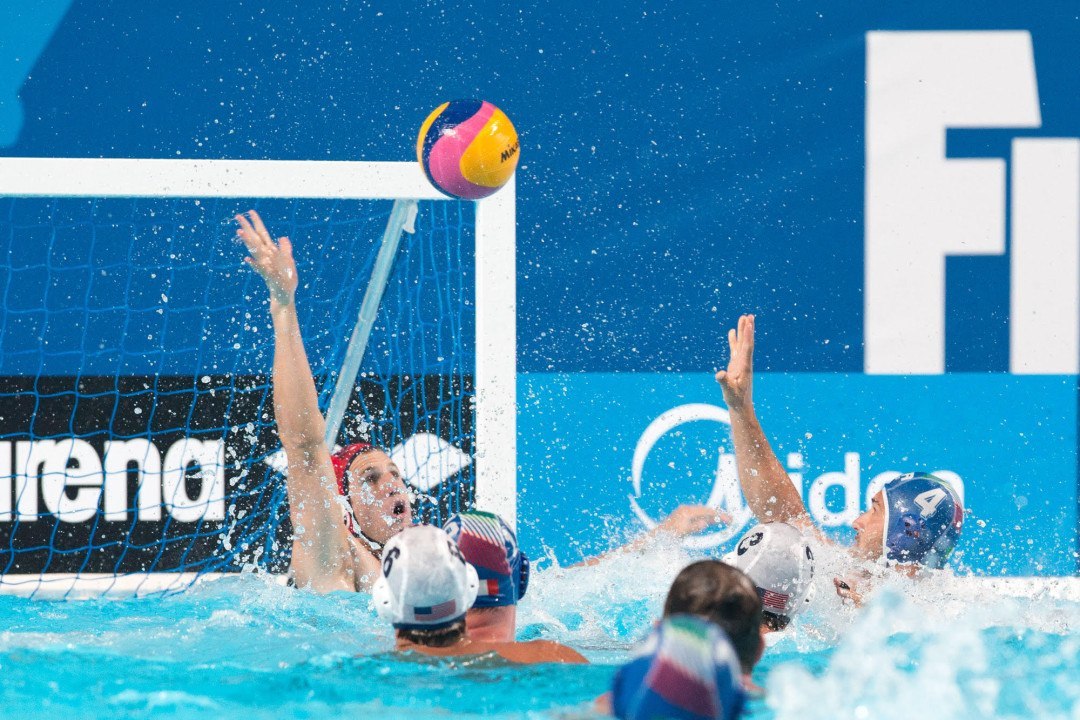 Italy will join Croatia, Serbia and Montenegro in the semifinals of the men's water polo tournament, after defeating Greece in the quarterfinals on Tuesday in Rio. Archive photo via Tim Binning/TheSwimPictures.com

Italy defeated Greece and will join the three ex-Yugoslavian teams, Croatia, Serbia and Montenegro, in the semifinals of the men’s water polo tournament in Rio de Janeiro. Italy jumped out to an early lead that proved to be difficult for Greece to overcome. In addition, Italian goalkeeper Stefano Tempesti had a fantastic game and made it all the more difficult for the Greeks to get back in the game. Pietro Figlioli put Italy up on a power play goal in the first minute of play. Teammate Francesco di Fulvio scored from outside 5 meters to make the score 2-0 with 3:53 left in the quarter. Greece’s Angelos Vlachopoulos fired off several long shots at the end of the quarter but Tempesti was there to stop them. Alessandro Nora added one for Italy early in the second period. Konstantinos Mourikis finally put Greece on the board with 4:37 left in the second quarter. Matteo Aicardi shot back on a power play and made it 4-1 to Italy. Mourikis connected a second time with 1:16 remaining to narrow Italy’s lead to 4-2 as the teams went off for halftime.

The third period featured nearly seven minutes of good defensive play on both sides before Figlioli and then Niccolo’ Gitto tallied another two goals for Italy. Ioannis Fountoulis scored a power play goal with 4 seconds left and the quarter ended with Italy leading, 6-3. Italy outscored Greece 3-2 over the final 8 minutes to seal the victory, 9-5. Fountoulis found the net with 4:49 left to play, but less than 30 seconds later Christian Presciutti took advantage of a man-up situation to move Italy ahead, 7-4. Aicardi added another goal for Italy with 2:13 left to go. Vlachopoulos answered with a power play goal 13 seconds later, but Figlioli’s shot with :23 remaining on the clock put the game out of reach for Greece.

Alessandro Campagna, Italy’s head coach, said: “We were better than the Greeks in every aspect of the game so our place in the semis is well-deserved. The four teams that are left are the same four teams that made it to the semifinals in London. We’ve changed seven players since then so I think for us to still be here is a great result. At this moment, Serbia is the best team in the world and we have a lot of respect for them. We have to play without any fear. We have to play with courage, strategy, physicality and passion. We’ll see what will happen.”

Greek captain Christos Afroudakis, stated: “It was one of the worst games we have had in the last three years. We were more stressed than normal and this affected our reactions in attack and defence. I think 100% it was a mix of the pressure and our lack of experience in playing these type of matches. We couldn’t manage the game right from the beginning and Italy deserved to win.
“We will play without any stress and we will try to achieve the best position. We must respect ourselves as athletes; it is our work and it is our jobs to finish these Games as high as we can.
“We have a really young team that has a lot of talent and potential. They must continue improving together and, as they are so young, these Games have given them more experience and they will benefit from that in the future. I don’t know about my future, whether I will continue, but I will make a decision after the tournament has finished.”