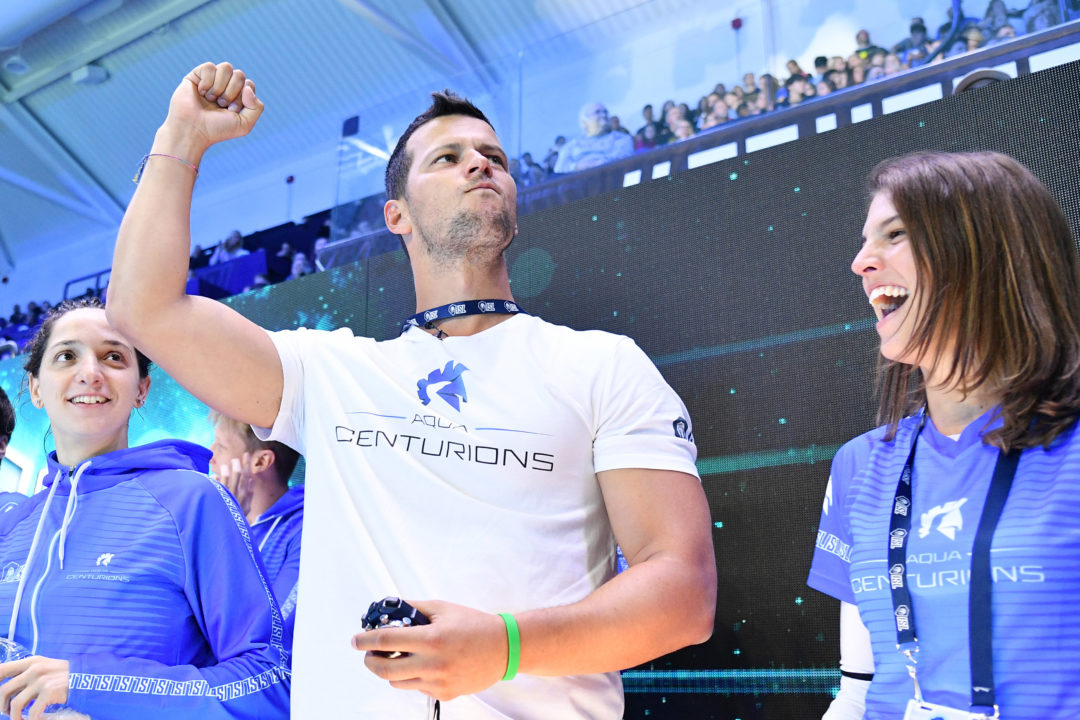 Matteo Giunta returns as the head coach of Aqua Centurions for the 2nd season of the ISL, set to get underway on October 16th in Budapest, Hungary. (Abo Current photo via Alfredo Falcone/LaPresse

The second season of the International Swimming League is set to get underway in two weeks, on October 16th in Budapest, Hungary.

Season 1 of the league saw eight teams compete across seven meets, with Energy Standard ultimately winning the Las Vegas finale in December 2019. Last year, the league was host to the vast majority of swimming’s most elite athletes, including Caeleb Dressel, Daiya Seto, and Minna Atherton who each set new short course world records during the season.

The addition of two new teams for season 2, the Tokyo Frog Kings and the Toronto Titans, brought two new countries into the mix and some new faces to the league. With countless Olympic gold medals and world record holders represented across 10 teams of the league, the firepower seen in season 1 will surely be seen for a second time around. As the beginning of season two draws nearer, check out where each team’s roster stands as of now.

It is not just the swimmers of the league, however, with highly reputable resumes: the ISL coaches’ reputations are similarly elite. Having collectively coached their athletes to innumerable Olympic medals, world records, and NCAA championships, the caliber of coaching on the ISL pool deck has likely been rivaled only twice in the last decade; in Rio and in London.

While it is still unclear how many coaches will be allowed on deck for each team at each meet, we do now know who will be serving as head coach for each team in the league this year;

While most of the league’s head coaches also train ISL swimmers year-round, many of the assistant coaches listed on the roster are also home coaches of swimmers on their ISL team. These coaches will get the chance to travel with the team and therefore their swimmers throughout the league this fall. The ability for home coaches to take part in the league is a big draw for many athletes as, in an Olympic year, a five-week separation form one’s regular coach is certainly not ideal.

A key home coach in the league will be University of Georgia’s assistant coach, Sean Schimmel, who is on the roster this season for the Cali Condors. The Condors have a strong contingent of swimmers from Georgia’s pro group, which Schimmel has been around for the past four seasons, including Hali Flickinger, Melanie Margalis, Nic Fink, Olivia Smoliga, Gunnar Bentz, Veronica Burchill, and Natalie Hinds.

A second coach to note here is London Roar’s Steven Tigg. Tigg has coached Roar’s Duncan Scott to several international medals over the past few years, and coached Scott, along with the rest of London to second place at last year’s ISL finale alongside returning head coach Mel Marshall. Tigg also coaches one of Roar’s recent addition to the team, Aimee Willmott.

Tokyo Frog King’s teammates Yui Ohashi, Katsuhiro Matsumoto, and Miho Teramura will also each have their own home coaches around for the season; Norimasa Hirai for Ohashi and Yoji Suzuki for Matsumoto and Teramura. Vlastimil Cerny joins the Toronto Titans, having coach Titan Kelsey Wog for the past four years at the University of Manitoba. As for the Aqua Centurions, Italian record holder Nicolo Martinenghi and coach Marco Giovanni Pedoja are both on the roster for the second season in a row.

Along with these examples, many more swimmers will get the chance to have their home coach with them during ISL season 2. Not only will it bring needed consistency to the athletes, but the home coaches’ representation also compliments the already superb caliber of coaching brought forth by the head coaching staff.

Platt and Teeter. Love it !

Swimswam, noting Emily Seebohms latest insta post can you reach out to her and confirm she is traveling to Budapest for ISL season 2?

Energy Standard has confirmed that she’s still planning on attending. Seems that her post confirms that.