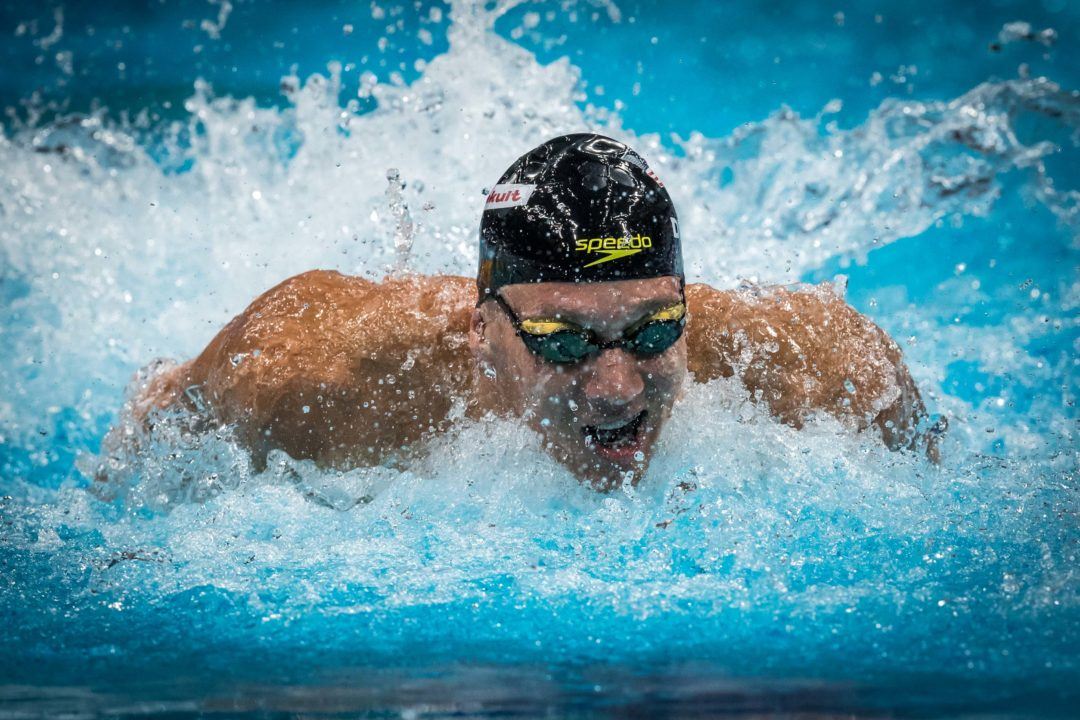 The Group A quad of match 1 winner Energy Standard, Cali Condors, DC Trident, and Italian host Aqua Centurions have already begun their second match-up in Naples with day 1 now in the books. After the first 19 events, the Cali Condors currently lead over Energy Standard by 7.5 points. In the running for third place, the Aqua Centurions are looking strong with an 11.5-point lead over the DC Trident.

As expected, Cali Condors team captain Caeleb Dressel‘s addition to the roster made a huge impact with his 22.5-point contributions. Currently, the multi-time world champion leads the MVP rankings by a half point over South African counter-part Energy Standard’s Chad le Clos.

Top 5 MVP Rankings After Day One

In roughly half of the events contested on Saturday, the Condors and Energy Standard ran an even race with an equal number or a 1-2 point differential of point contributions. Breaking down point contributions, only the men’s 100 fly and 200 breast had relatively even point contributions across all four teams. Below are events that continue to be a team’s vital weapon on day one:

While the Aqua Centurions are running much better than in Indianapolis, both them and the DC Trident continue to show major weak spots when stacked next to the Condors and Energy Standard.

For the Centurions, it is evident their main strengths and point contributions come from the male sprinters of the group. After day one, the men contributed 120 points while the women scored only 54 points, creating the largest gap among gender contributions. The women’s 200/400 distances (not including Margherita Panziera‘s DQ in the 200 back) continue to be a struggle for the Centurions with only 3-6 points earned from those swims.

As for the DC Trident, their event coverage is relatively shallow, with very few events having strong point contributions. In events like the men’s 50 free and 50 breast, their swimmers simply just aren’t strong enough to topple down their other foes. With Trident relays, there’s not enough swimmers to make a strong relay like Energy Standard’s free relays or the Centurions’ men’s medley relays.

While most teams utilized the same swimmers in each event, there were still a number of roster swaps that switched up the outcome of many events. One prime example of this is Caeleb Dressel‘s debut ISL appearance in both the 100 fly and 50 free.

While Chad le Clos won the 100 fly yet again for Energy Standard, Dressel made the race much more interesting with the duo separated by one one-hundredth. In the same way, Dressel’s second place finish bumped down Aqua Centurions’ Matteo Rivolta and Santo Condorelli to 3rd/5th.

In the 50 free, Dressel and 2012 Olympic champion Florent Manaudou finally met up in their signature events, which made the race all the more exciting. Dressel’s determination against of the greatest male sprinters allowed him to bump down Manaudou and Ben Proud‘s point totals from 16 to 13 for Energy Standard.

Another huge example you most certainly did not miss was the Aqua Centurions’ winning men’s 400 medley relay. In Indianapolis, the Centurions split up their best strokers among the two relays. In Naples, in front of a home crowd, the team put up top dogs Simone Sabbioni, Nicolo Martinenghi, Matteo Rivolta, and Alessandro Miressi together and took down the relay-dominant Energy Standard.

Energy Standard need some stronger female breaststrokers to keep up with Cali. They could put Seebohm in the 50 breast.

I don’t get what Heintz did?

Not saying they’re supposed to, I’m highlighting a disadvantage more than anything