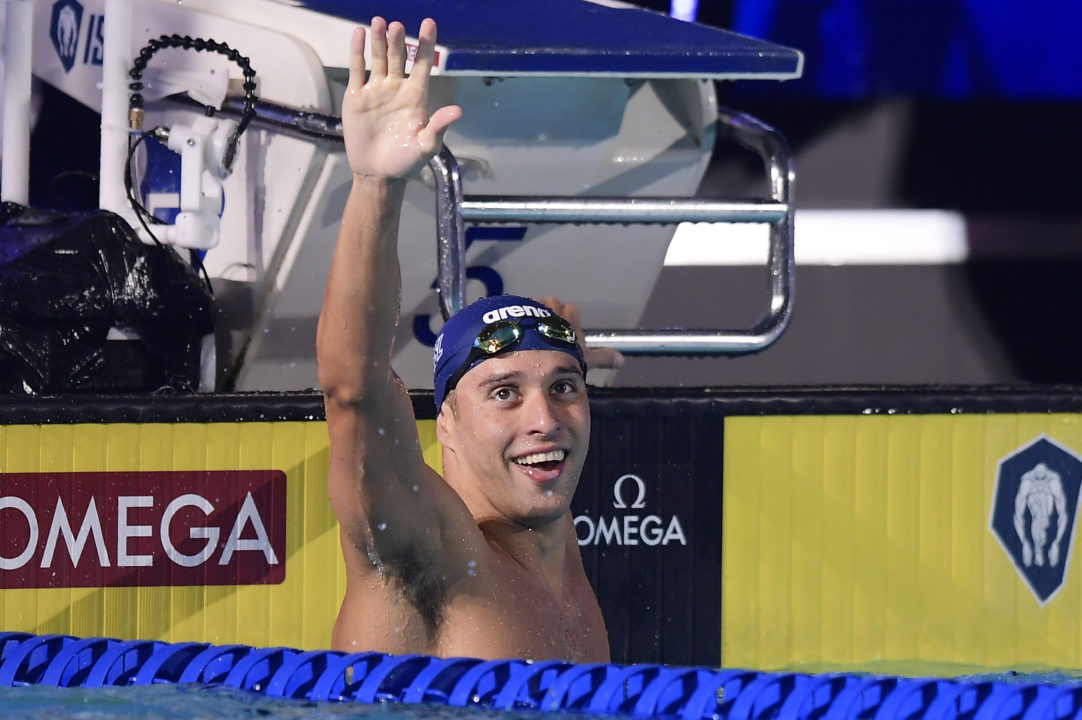 Energy Standard lost a couple of contributors but retain almost their entire core for 2020. They'll be heavy favorites to win a second-straight title. Archive photo via Fabio Ferrari/LaPresse

What isn’t a strength for the defending champs? Energy Standard really only lost a couple of important free agents. It would have been hard to keep Daiya Seto with an expansion franchise opening up in his home country of Japan. Same for Kayla Sanchez. (Sanchez and Anton Chupkov were two of the top free agents to leave Energy Standard, and neither are ultimately competing in the ISL this year).

Adding Haughey and NY Breakers free agent Pernille Blume only beefs up the league’s best sprint corps. Sjostrom was the league MVP last year and won three of her four skin races. She’s probably the swimmer to beat in both fly and free, with the exception of maybe Iron’s Ranomi Kromowidjojo in freestyle.

The sprint free prowess extends to the men’s side, where Florent Manaudou and Ben Proud are elite talents. And the key that really won Energy Standard the title last year was that every top swimmer could hit a big-time 100 free for relays. The men’s relay depth remains extremely strong, with at least seven men legitimate contenders to split 45-something (Manaudou, le Clos, Rylov, Kolesnikov, Bilis, Shevtsov, Proud).

The men’s backstrokes are loaded up. Russian duo Evgeny Rylov and Kliment Kolesnikov are so good that free agent additions Matt Grevers and Danas Rapsys are almost superfluous. But having that depth allows Energy Standard to lighten everyone’s event load a little.

Breaststroke is strong on both sides, which is a key counter to the greatest strength of the London Roar, last year’s foremost challengers to Energy Standard. Ilya Shymanovich is a great three-distance breaststroker who will be a key skin entrant this year. Energy added young Italian star Benedetta Pilato and Breakers free agent Breeja Larson to load up the women’s events this year.

The most notable weakness for Energy Standard will be the women’s free relay depth. That’s notable because, as we mentioned above, relay depth was the key to ENS’s title run last year. Of the 8 women to swim on a 4×100 free relay in last year’s finale, half are gone (Sanchez, Oleksiak, Bonnet, Smith). And while the heavy hitters (Sjostrom, Heemskerk) remain, the depth is much more shaky, and Energy Standard will need some big swims from deeper in its roster to keep raking in those B relay points.

Butterfly depth is a bit of an issue all around. We made the same observation about Cali’s men’s freestyles: when you have a superstar at the top (Dressel for Cali, Sjostrom and Chad le Clos for Energy), a lack of depth isn’t quite so devastating. But it’s worth noting that Energy doesn’t have a ton behind Sjostrom, and is really thin in the 200 fly, where Sjostrom’s brilliance doesn’t cover the holes so much.

The men are also very thin after le Clos. Rapsys projects as perhaps the team’s #2 entrant in the 100 and 200 fly, and it’s probably not worth wasting his energies there when he’s also the team’s top 200/400 freestyler. ENS might have to get creative to find another flyer who can avoid getting jackpotted.

Free: the freestyle skin races were very good for Energy Standard last year. Sjostrom won three of her four entries there. Florent Manaudou and Ben Proud made the second round in three of four meets. Manaudou won once, when ENS packed the final with both men.

Back: Manaudou is the world record-holder in the short course 50 back, but Kolesnikov (the long course world record-holder) might be the better three-round threat. Either way, ENS has a shot to have two finalists again here, with the right field. The women’s side is a little less strong. Emily Seebohm can probably make the first round of cuts, but won’t be a favorite to win.

Breast: Pilato is an extremely intriguing addition here. She was the long course World Champs runner-up in the 50 breast and seems to be rising fast. For the men, Shymanovich and Felipe Lima are both in the select group who can go sub-26.

Fly: While butterfly depth is an issue, top-end skin speed is not. Le Clos should be a great option, with awesome 50 speed but also top-end endurance up to the 200. Sjostrom has been very hard to beat in the 50 fly over her career.

There’s no doubt that Energy Standard is the heavy favorite to repeat as ISL champions, and there haven’t really been any breaks that haven’t gone their way so far. When expansion teams rose up, ENS was able to retain the vast majority of their stars. They pulled a couple of top-end free agents. When almost all Australian athletes withdrew amid that country’s coronavirus travel bans, ENS’s top Australian, Emily Seebohm, did not. And to top things off, Energy Standard got the league’s softest schedule, with no regular-season matchup with last year’s runners-up in London.

The ISL regular season looks an awful lot like a five-week coronation parade for Energy Standard. That’s not to say there won’t be issues to overcome. The women’s relay depth is going to cause a lot more problems than it did last year, when Energy Standard won the women’s 4×100 free relay at every meet and the mixed 4×100 free relay at three of four. They’ll have to figure out some butterfly workarounds, and of course, avoid any coronavirus outbreaks that might thin out depth further.

That said, Energy Standard still has a great chance to be the #1-scoring men’s team like they were last year. That scoring title included two costly relay DQs during the regular season, so the final tallies could have been even more lopsided. Energy Standard can pretty much hold serve in a skin race of any stroke, and they should get to choose the stroke to maximize their advantages often.

Boooooring. That Konstantin guy is trying to do everything so that his favorites earn more money than they already have and that energy standard wins….No non swimmer will watch this

Energy standard is literally that guy she tells you not to worry about.