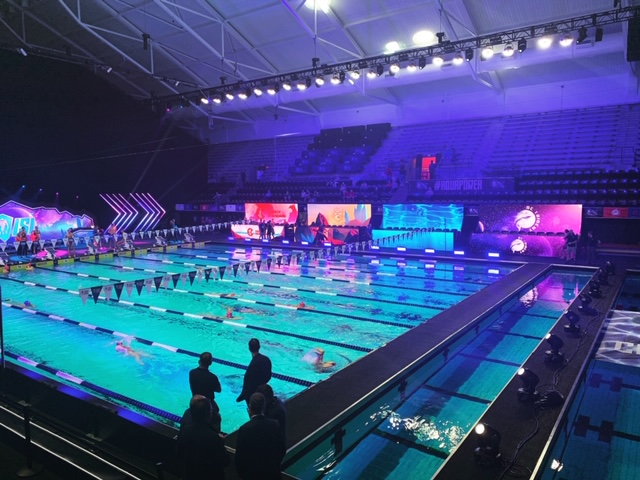 After debuting in Indianapolis last week, the ISL chartered a United Airlines flight to take athletes and staff to meet #2 in Naples, Italy. Current photo via Braden Keith

Group A of the International Swimming League was supposed to arrive in Naples, Italy on Monday afternoon, but turbulent weather has caused a change of plans, and the flight was instead diverted to Rome.

Because of the challenge of trying to fly commercially from Indianapolis to Naples (which would likely require connections in both Chicago and Rome), the league chartered a direct flight from Indianapolis to the southern Italian city of Naples. That flight included all of the athletes and coaches who are competing at both meets, plus league support staff.

After circling Naples twice, including one attempt at landing that was averted because there was too much turbulence, the United Airlines flight instead diverted to Rome. There, the athletes ate dinner at the airport and were taken to buses to be driven to Naples – about a 3.5 hour trip. The original plan was to arrive in Naples at 2:30 in the afternoon, with an updated arrival time of well after midnight.

Racing doesn’t begin in Naples until Saturday, so the change of destination shouldn’t impact the meet too much – but it turned a relatively-easy 8 hours direct flight into a 10 hour flight + bus ride, which could impact how long it takes athletes to make the adjustment to the new time zone. This could also impact athletes’ whereabouts filings for any unannounced out-of-competition drug tests.

There was no severe weather in the area, but athletes on the flight tell SwimSwam that it appeared to just be an excessive wind problem. The turbulence was described as “worse than normal, but nobody thought they were going to die.”

Below, the flight tracker from flightradar.com shows the plane circling and making an attempt to land before heading on to Rome.

The 4 teams making the trip are the Cali Condors, DC Trident, Energy Standard Swim Club, and Italian-based Aqua Centurions. Energy Standard came away victorious in the league’s inaugural meet last weekend in Indianapolis, followed by the Cali Condors, DC Trident, and Aqua Centurions. Caeleb Dressel will join the Condors this week in Naples, giving added starpower to Group A competition.

isn’t it a little risky to put so many Olympics on the same flight? Like…you know, accidents happen.

Vote Up7-9Vote Down Reply
The Man Himself

You do realize that entire NBA, MLB, etc. teams fly together right? Not only that, but it’s statistically more likely they would’ve died in a car/bus.

Yeah, the odds of the athletes dying in a car or bus trying to get from Indianapolis to Naples would have been 100%.

While USA Figure Skating reportedly still doesn’t allow its whole team on the same plane due to the Sabena 538 crash, modern commercial aviation is extremely safe and dozens of teams fly charter like that every day. And dozens of flights every day have an abort and go round ( or abort and divert). It’s not precisely fun when you feel the plane wobble a bit and then the engines kick in unexpectedly and you’re going up again, but it’s not all that scary in probably 95-97% of aborted landing attempts either.

Anyone see at flightradar.com it was’n United flight. Charter was from LOT Polish Airlines Boeing 787 Dreamliner

Totally agree. Never put all your officers in one shuttlecraft.

Esepecially if they’re going to a conference, coach DeSoto!

Vote Up3-11Vote Down Reply
The Kraken

It’s pretty clear that they’re warming up or cooling down, unless the 500 kick just became and event.

This was taken during warmup, much before anyone had arrived. At least for the second day when I was there, the stands visible there were very well filled.

This was taken at least an hour before Saturday’s session started. My rough hand count put it at about 600 on Saturday, with a bigger crowd on Sunday, maybe 800. Take those for what they’re worth – rough hand counts and extrapolations, not hard-and-fast numbers. They’re in the territory, though. The section of stands on one side of the pool immediately adjacent to the 25 meter course appeared as full as any sporting event you’ll go to, but not much beyond that.