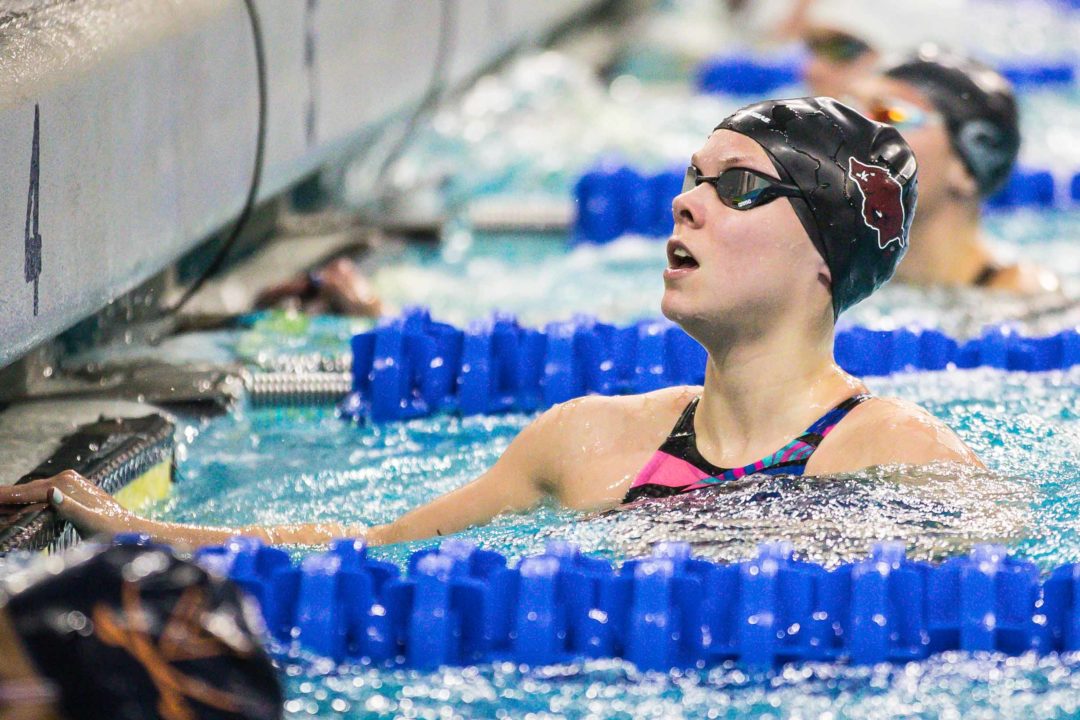 Hopkin, coming off of making the World Champs 50 free final this summer, also won the 50 free with a time of 22.57 and the 100 fly with a time of 54.84. Archive photo via Jack Spitser/Spitser Photography

Anna Hopkin logged a very impressive relay split of 48.24 on Arkansas’s B 400 free relay as the Razorbacks took down Arkansas – Little Rock at home in Fayetteville. That’s a little over a tenth quicker than she was on a relay in her first meet of last season.

Hopkin took wins in both of her individual swims, too. She was 22.57 in the 50 free, the only finisher under 24.0, while she added a 54.84 to take the 100 fly over teammate Kobie Melton (56.03). After a successful summer where she logged lifetime bests in LCM of 24.34 in the 50 free and 53.21 in the 100 free at World Champs, making the final in the former race, Hopkin is a major contender for sprint free national titles in her last NCAA season.

No. 19 Arkansas swimming and diving opened the 2019-20 season with a sweep against Little Rock 161-121 at the HPER Natatorium. The Razorbacks won all 16 events and had 32 podium finishes, with amazing contribution from every single one of the girls.

The sophomore and Junior class made sure they would be noticed with Distance swimmers like Lexi Ljunggren and Peyton Palsha who showed their endurance winning all Distance events. Vanessa Herrmann, Emma Garfield and Andrea Sansores showed resilience and fight in the breaststroke, butterfly and IM events. Maddie Pearl won her first college event of her career in the 200 Backstroke with a time 2:04.77.

“I thought that Esti did a really good job on the diving boards over there, she’ll have to step up for us this year, and that’s exactly what she did. She is coming back from a major injury, major surgery, so that was a brave effort from her and some really nice diving.”

Freshmen like Maddie London, Emma Hultquist and Jessie Beckwith had fantastic performances, especially it being their first meet as a Hog.

“The freshmen did really well today, I was a little worried where they were maybe three weeks ago, but they have come in and listened and have been coachable that’s the most important thing. When they make that jump from club/high school to college you really need to get the finer things down.” Harper said. “Under the pressure of being freshmen they did a really good job of executing their races well and that gives me hope for the rest of the year.”

With outstanding performances all around the block, the Hogs will find themselves heading into the next meet against the No. 1 Stanford Cardinals ­­­­­­with confidence.

LITTLE ROCK – The Little Rock swimming and diving team had the opportunity to race the in-state Arkansas Razorbacks this afternoon for the first time in program history. The Trojans fell 161-121, but several members showed significant drops in time as well as gains in point totals over just the past seven days.

“I could not be more proud of how the team handled the meet today,” said head coach Amy Burgess. “We had great energy start to finish and saw so much improvement from last weekend. This was a great opportunity and we are looking forward to seeing how the team will continue to grow! “

The Trojans got the chance to race in the first 200 medley relay of the season this afternoon, rather than the 400 medley like last weekend. The A squad, made up of freshman Fer Moussier on backstroke, junior Palmer Ristroph racing breaststroke, sophomore Carolyn Godwin doing the butterfly leg, and junior Regan Lawrence on freestyle touched the wall at 1:52.11. Later, in the 400 freestyle relay, it was actually the B relay that was the first Trojan squad to stop the clock. The group of Moussier, Ristroph, senior Jessie Baldwin, and senior Charis Won turned in a time of 3:44.11, just over seven tenths ahead of the A team.

Junior transfer Coy Jones showed significant improvement, collecting third place with a score of 214.58 on the 1-meter board and gaining over 20 points from last week in the process. Classmate Sierra Thain was right behind on the lower board with 212.63 points. The pair switched off on the higher board: Thain earned second place overall with 223.05 points on the 3-meter board, while Jones was third at 210.08.

A couple new faces were featured in the 1000 freestyle today, with junior transfer Ashley Hornbuckle leading Little Rock in 11:18.00 to clinch third place. The event right after, the 200 free, saw Asmalia Redzuan drop over two seconds from her time at North Texas. The freshman posted a time of 1:57.42. The final of the longer free races, the 500, was led by sophomore Lea Zengerling, who stopped the clock at 5:18.58, the best time out of the team this year so far.

In the 50 free, Lawrence was the first Trojan to touch the wall, coming in at 25.29. Redzuan was right behind, however, by only three one-hundredths of a second. In the 100 freestyle, freshman Khadijah Brown had a stellar swim to post a time of 55.71, nearly a whole two seconds faster than last week. Lawrence also made an appearance in the 100, touching right behind Brown at 55.76.

Baldwin excelled in the 100 back, finishing as the top Trojan with a time of 1:01.40. Mia Gibson also competed in the short backstroke, shaving off time from her swim last weekend. The junior took off approximately a second, lowering her time to 1:02.73. The same pair faced off against the Razorbacks in the 200 backstroke, with Baldwin recording a 2:14.11 while Gibson stopped the clock at 2:16.78.

Ristroph collected a third-place finish in the 100 breaststroke, clocking in at 1:08.31, just four tenths behind the Razorback that took second. Godwin also tried her hand at the short breast race, earning a time of 1:10.08 to further extend her repertoire. Ristroph repeated in the 200 for another bronze, posting a 2:31.66, with freshman Nicole Burek coming in after her at 2:36.53, over two seconds faster than at North Texas.

Moussier put up the highest swimming finish of the day for Little Rock in the 200 butterfly, placing second with a time of 2:07.78. Notably, classmate Brianna Ridings also took off about 12 seconds from her 200 fly time from last weekend. Moussier also was the top Trojan in the 100 fly, touching the wall at an impressive 58.36 for this early in the season. Freshman Anna Grom was the next Little Rock swimmer at 1:01.27.

Rather than the longer individual medley event, today’s meet featured the 200 IM, where Godwin threw together a 2:13.74 to further show off her versatility. Freshman Ashleigh Green had the next fastest time for the Trojans, touching the wall at 2:16.86.