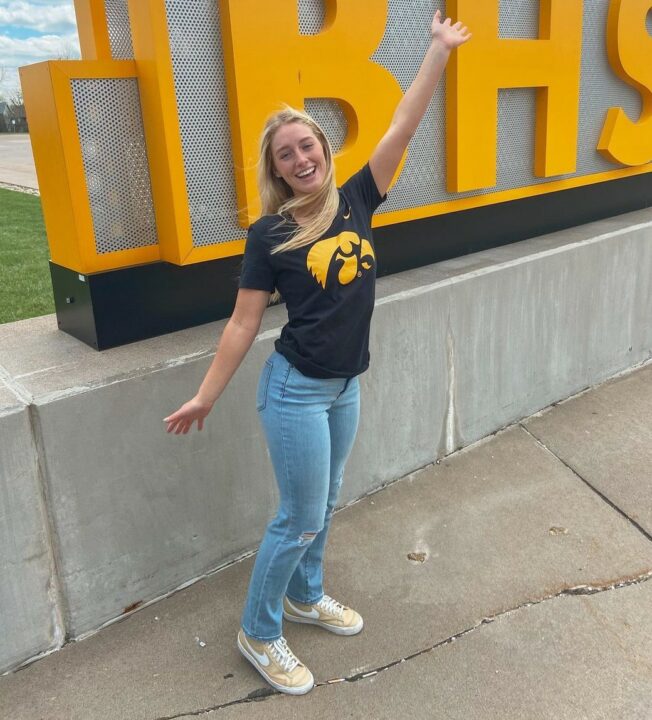 Makayla Hughbanks, a diver from Bettendorf High School in Bettendorf, Iowa, has announced that she will be staying in-state to continue her athletic career, committing to the University of Iowa’s class of 2021.

Hughbanks is a newcomer to the diving board, not taking up the sport until her sophomore year of high school. As a sophomore and junior, she finished 12th and 13th at the state championship meet, respectively. As a senior, she was dominant at the state meet, winning by over 20 points with a final score of 505.70. She was just off of her lifetime best, and school record, score of 509.95 from the regional meet earlier in the season.

The Iowa women, who finished 8th at the 2021 Big-10 Swimming and Diving Championships, struggled in the diving events. The Hawkeyes scored just 33.5 points across the three events, topping only Penn State, Michigan State, Illinois, and Rutgers. On the 1-meter, the team was led by the 17th place finisher, Sam Tamborski. Tamborski’s best performance came on the 3-meter board at that meet, where she took 9th. She also competed on the 3-meter board at the NCAA Championships, taking 28th.

The University of Iowa’s program has been through a whirlwind of changes after the school initially announced that they were cutting both the men’s and women’s swim and dive programs last August. In February of this year, the school decided that they would be reinstating both the women’s swimming and diving teams. Despite this decision, long-time head coach Marc Long decided to leave the program, with Nathan Mundt joining the team in his place. As of now, the women’s team will only have 12 members for the 2021-22 season, with four of those being divers. Hughbanks is set to be the only freshman diver next season, per the school’s posted roster.