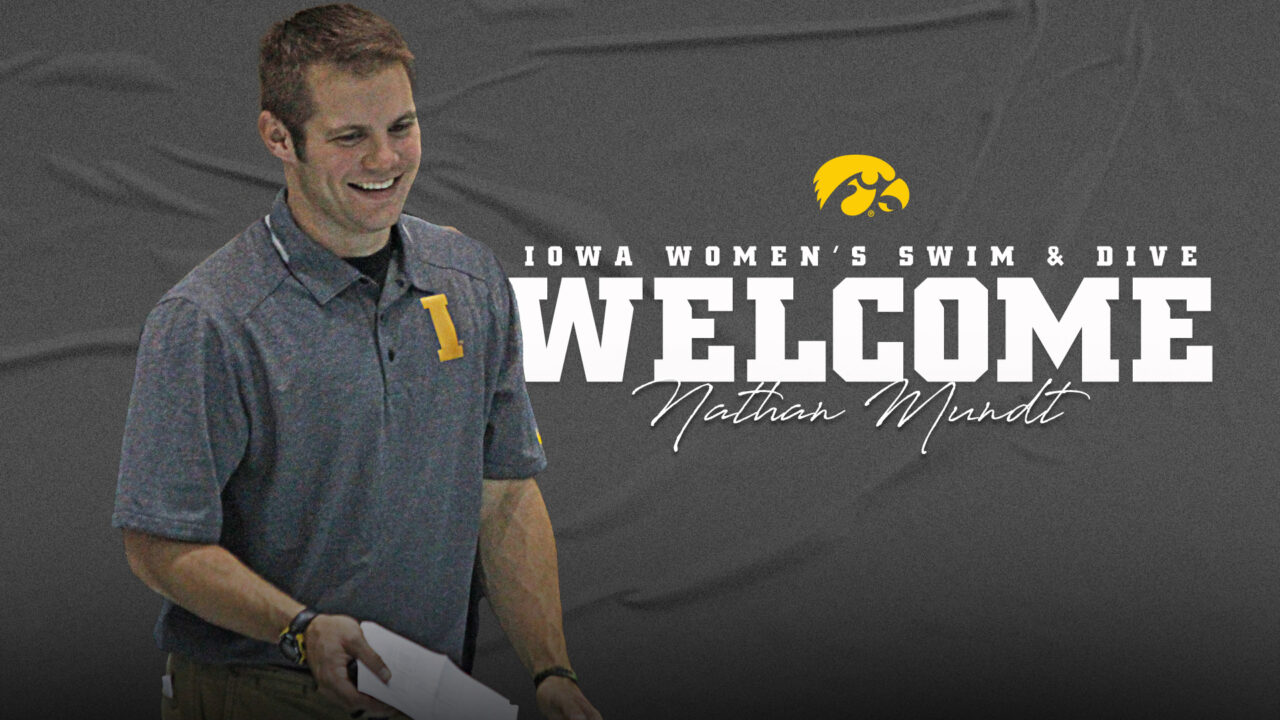 This will be Mundt's first year as head coach at Iowa, though he's been on deck as both a collegiate and club coach in Iowa City for 13 years. Archive photo via Iowa Athletics

The University of Iowa has announced the hiring of Nathan Mundt as the program’s new head women’s swimming & diving coach. He takes over the program after the departure of 17-year head coach Marc Long, who declined the opportunity to continue as just the women’s head coach next season when the men’s program was cut.

The 2021-2022 season will be Mundt’s first as Hawkeye head coach and it will be the school’s first in more than a century without a men’s swimming & diving program. The school originally announced last August that they would be eliminating the men’s and women’s swimming & diving teams, along with men’s gymnastics and men’s tennis. After a Title IX lawsuit was filed by members of the women’s team, the school announced in February that it would reinstate the women’s team, though the men’s team is still eliminated.

While this will be a first for a lot of reasons for Mundt and the Hawkeyes, it won’t be his first season on deck in Iowa City. Mundt spent 8 seasons as an assistant coach and recruiting coordinator at Iowa from 2008-2016. During that period, Iowa athletes won 33 All-America awards and set 115 school records.

Mundt also recruited four international men’s student-athletes who represented the program at the 2016 NCAA Championships in the 400-yard medley relay and assisted in coaching the Big Ten-winning 200 and 400-freestyle relays in 2012. The Iowa men placed fifth at the 2012 Big Ten Championships and had five first-team All-Big Ten honorees.

More recently, Mundt has served as the head coach of the Iowa Flyers Swim Club which trains out of the University of Iowa pool, among other places. The Iowa Flyers were named a bronze medal club in USA Swimming’s Club Excellence Program for 2021.

Among the best-known of the program’s alumni are Forrest Frazier, a state record holder who placed 4th in the 100 breaststroke this season at Cal as just a freshman. The program has produced a number of other Division I swimmers during Mundt’s time there, including Arizona State’s Ruby Martin, Florida commit Scarlet Martin, and Stanford commit Aurora Roghair.

He also has a previous stop as the head men’s and women’s coach at Western Illinois, where he was the 2007 MidCon Conference Women’s Coach of the Year. As an athlete, Mundt was a four-year letter winner and academic all-conference honoree at the University of Tampa.

After finishing his undergraduate degree, he served as a graduate assistant at Valparaiso from 2003 through 2005 and served as the interim head coach for the 2003-2004 season.

He and his wife, Erika, have three sons, Nolan, Macklin and Lincoln.

The Hawkeyes had a total of five student-athletes qualify for the men’s and women’s NCAA Championships during the 2021 season. The 4 women didn’t score, while the lone male qualifier Will Myhre was scratched from the meet after a positive COVID test. The men’s team finished 8th out of 10 teams at the Big Ten Championships, and the women’s team finished 8th out of 13 teams.

This hire is a joke. It takes a lot more to build a respectable Big 10 program…oh wait, Iowa is not trying to do that.

I’m giving an A+ with the kids’ names. No one would f with Nolan Ryan, “Mack” is usually someone to not f with either, and Lincoln — well, you’ve got your choice between Abe and Linc from Mod Squad, who was the coolest dude ever. For male child 4, I’d go with Macklincoln.

Nothing against Nate, but this shows how little the athletic department cares about this sport. With majority of the women’s team still transferring because of how they were treated, you bring in someone who hasn’t recruited in 5 years. Iowa will be bottom of the Big10.

Would love to know the applicants… Knowing more qualified candidates applied including females and they never got phone calls.

He is just another male Pawn under Gary Barta. A cheap/local hire.

“Nothing against Nate,” but let me add that he’s comparatively under-qualified and also a male pawn. Would hate to see what you say when you had something against somebody.

Completely underwhelming hire. Not surprised with Barta picking Nate, he’ll stay quiet, collecting his check, while the women’s team slips into oblivion and becomes the new Illinois.
Marc was terrible, but Nate won’t be better.
The training trip motto Nate came up with, one year, was “don’t suck.” Well, don’t suck, Nate.
Definitely not “the best” this program could get, as there are a lot of alumni in the coaching world doing really well. Many right in IA, too…

“Don’t suck” is helluva lot healthier motto than “no pain, no gain.”

Next move the University of Iowa should do?
Add a men’s varsity team program back for Coach Mundt!