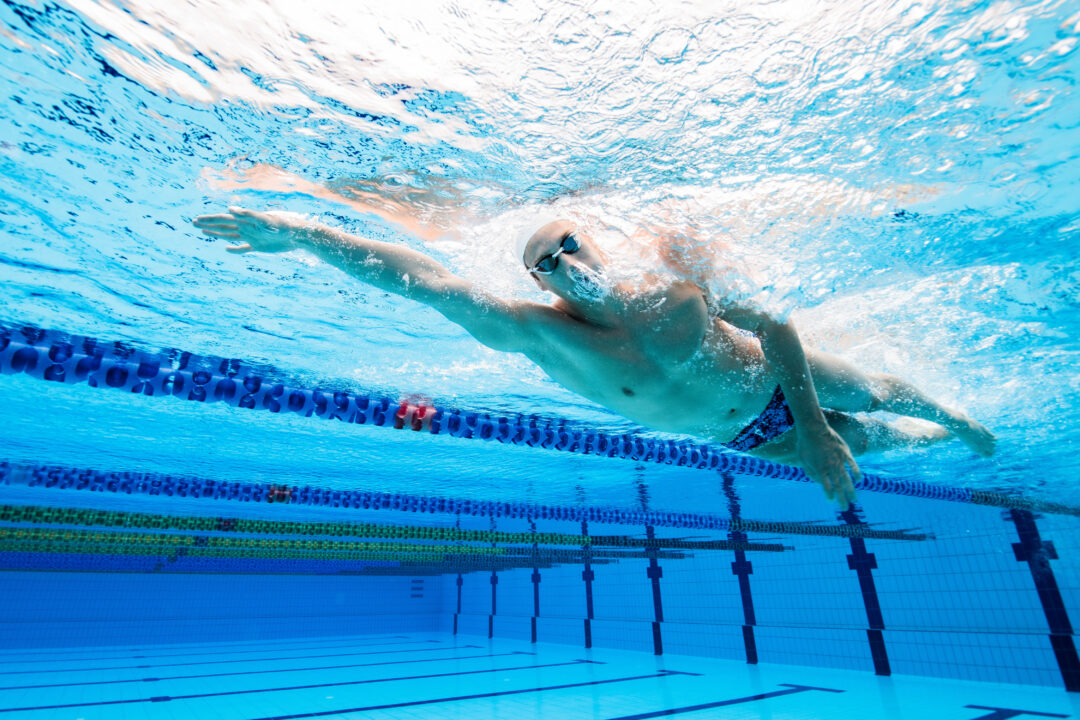 After winning two Olympic medals in Tokyo, Australian Alexander Graham gives some insight into some of the mental battles he's overcome in the sport. Archive photo via Cavan Flynn

Which Aquatic Athletes Will Be in the 2022 USOPC Hall of Fame Class?

Michael Phelps with his 28 Olympic medals is a sure-fire first ballot Hall-of-Famer. But which of the other 6 aquatic nominees might join him?

My 10 Favorite Swims from the 2022 US International Team Trials

The Magic Man had a Magic Moment last week with the only World Record of the 2022 US International Team Trials in Greensboro.

Alexander Graham is an Australian Olympian who won two bronze medals at the Tokyo 2020 Olympic Games in the men’s 4×100 and 4×200 freestyle relay. He details his journey from junior swimmer to Olympian in his own words.

When you’re a junior swimmer you say you want to compete at the Olympic Games and win a gold medal, like it’s an easy feat. As you grow and start to work harder, the dream becomes a burning desire. You learn about your heroes, the people you must chase. You learn about discipline and sacrifice, what’s required to become part of the elite. The journey is long, but my word it is worth it. Now having lived my Olympic dream and serving my mandatory two weeks isolation, I have reflected on my journey as a swimmer and how I got to this point in my life. I’ve gone from a fearless but at times foolish young athlete to a mature, more intelligent one by learning from my mistakes and becoming aware of the things that have a positive effect on my life.

I started to dream when I was young. I was under the tutelage of Gene Jackson, who coached many Olympians. He taught me to challenge myself, to be a hungry competitor, and as I grew older and began to have success, to be the best person I could be. A phrase often heard was, “it’s nice to be important but it is more important to be nice”. I cruised up the rankings, winning age group titles and puffing my chest out with each step I took. In my mind, I wasn’t going to stop until I had achieved the dream.

I made my first Australian Team at the age of 18. In Barcelona for the World Championships came the first stumble of my career. I swam almost three seconds over my personal best and felt I let the whole Australian team down. Australia has such a great history of their best swimmers performing on the big stage as kids: Ian Thorpe, Leisel Jones and Grant Hackett, to name a few. I thought age is no excuse, maybe I’m just not meant to be a swimmer. I didn’t understand failure could be used to fuel future success. I wasn’t interested in learning about the highs and lows of elite sport, I just wanted the highs. I lost the drive, I lost the competitiveness, and I was more interested in parties than swimming fast.

All through school I had no interest in studying. But when I finished year 12, I decided to move to the Gold Coast to train and go to Bond University, which changed my life. I met my closest friends through Bond and through swimming on the Gold Coast. Without these people I wouldn’t be who I am today.

My first few years swimming on the Gold Coast were not great. What I was doing back then was nowhere near the work required to become the elite. Coming into the 2016 Olympic trials, I naively thought ‘this is going to be easy; I will make the Olympic team’. I finished 9th in the 200m Freestyle and 12th in the 100m Freestyle that year and had to watch as my friends made the Olympic team and fulfilled their dreams. But it was when watching them compete in Rio that something clicked. It was a moment of disappointment mixed with determination where I knew I could be on that team if I really wanted it. It was at that moment I thought, ‘I want to be an Olympian’.

At the end of 2016, I began training under Richard Scarce at Bond University. I learnt how to get the best out of myself in the pool and out of it. I got to train with Cameron McEvoy and Tom Fraser-Holmes, the two fastest 200m Freestylers in the country and Matt Stanley, the New Zealand record holder in the 200m Freestyle. As these blokes challenged me to race them every day, my confidence grew. I eventually made the Australian team again in 2017.

In 2018 I swam well enough to get selected for the Commonwealth Games on the Gold Coast. This was so special for me, being my second home and because my whole family and my biggest supporters (Mum, Dad, Katie, Steph) were able to see me swim for the first time at an international meet. It was surreal swimming in front of 10,000 people, mostly Australian, knowing that they all had your back when I stepped onto the block. I came away from that meet with a gold medal with the 4x200m boys.

I hit 2020 with a fire burning, a desire to be the best and qualify for my first Olympics. I had never been more determined, in the pool and outside. But in March the cancellation came. I was devastated and thought I may never get this chance again. Fortunately, I have a great support team around me, my family, and friends. I switched my brain off from swimming, went back to Melbourne to see my family and focused on other parts of my life which gave me some perspective. It was great to have an outlet away from the pool in my studies at Bond University that kept me busy as well. I’ve always been a big believer in life balance, and it was fantastic to get that mental break. Elite sport can throw you some curveballs, but it is what you do with those opportunities that makes you a great athlete. I got back in the water for what would turn out to be the longest preparation for a meet I’ve ever done.

From July 2020, I worked. But when 2021 hit it was all business. It was by far the most intense training I’ve encountered. I’m fortunate that my training squad had banded together and become so tight over the covid break that we were able to push each other and get the best out of each other, even when none of us wanted to. I had never felt more confident in the water, and knew I was on for something special at the trials.

The pressure cooker. Olympic Trials. The past 18 months had led to this moment, and I couldn’t help but let my mind run. I was so fortunate that my Mum was with me in Adelaide, having escaped the Melbourne lockdown three weeks earlier, without her there helping me and distracting me from swimming, I may have fallen over. My heat of the 200m Freestyle was amazing, I have never felt better in the water. But as all swimmers know, the body and the mind need to be simultaneous to execute the best race. The final was hard, I couldn’t help but overthink my race plan, I went out too fast, too excited to prove myself and I finished 4th, my heat time would have won. I was shattered. In my mind, I blew it. It was a tough pill to swallow, and I struggled to realise and celebrate the fact that I had just qualified for my first Olympics on the 4x200m Freestyle relay. In my mind, I was the best in that field and had underperformed. It was an emotional rollercoaster. I saw my mum post-race and instead of celebrating, I broke down in tears. For me, my mum is my rock. She helped me realise that what I had just done was extremely special. I had just achieved my dream of making an Olympic swimming team.

The mental battle continued at the staging camp. I didn’t want to be there and I couldn’t bring myself to get the best out of training. I had a couple of private breakdowns, ones brought on by mental fatigue and a thought that I had lost an opportunity I had been so focused on achieving. I silently shed some tears during a couple of training sets, goggles on to hide and try keep that alpha persona going. It wasn’t until I spoke to my coach Rich, who reassured me that I hadn’t failed and that deserve to be on the Olympic team, that I began to focus on doing everything I could possibly do to get the Australian Team a medal at these games.

The Olympics was fantastic. One thing about me is that I love to see my teammates swimming well. I have always been a team guy and having been selected onto the athlete leadership group in 2019, I made it my mission to bring the team together to get the best out of ourselves. The previous years’ experience had helped me stay calm when it came to racing. I wanted to compete for my Country and for my Teammates. I enjoyed every moment of being out there. I embraced the nerves, embraced the Olympic environment, and embraced my teammates. All the training and experiences over the years culminated into a few minutes a of racing. The journey had been long, by it was indeed worth it. There was no prouder moment than the dais with my brothers, watching the Australian flag rise.

Being an elite athlete is a mental battle. We do things day in day out that most people do not want to do. It’s the pursuit of excellence that drives us, the dream of one day representing your country. But along the way, whether you fail or succeed, you grow as a person. My journey taught me to live in the moment, and that a failure is only a failure if you let it be one. Positive attitudes breed positive performances and great teamwork breeds great experiences. To be a part of the most successful Australian Olympic Swimming Team in history is something I am extremely proud of. But as always, I am hungry for more…

Good read….nice to see someone just say ‘I didn’t put in the work’ rather than make excuses! He was a rock solid member of the 2 relays in Tokyo, and earned his 2 Olympic medals….