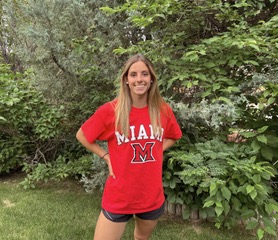 A native of Greenwood Village, Colorado, Madison Saldanha has announced her intent to join the Miami University Redhawks as a member of their class of 2022. Saldanha attends Cherry Creek High School and swims with the University of Denver Hilltoppers. She has been a NISCA All-American the past two seasons, both as a part of Cherry Creek’s 400 free relay.

“I am beyond thrilled to announce my verbal commitment to continue my academic & athletic career at Miami University!! Huge thank you to my amazing parents, coaches and teammates for all their continued support throughout this journey! GO REDHAWKS!!❤️🤍”

Saldanha was a multiple event finalist for her high school at the 2020 CHSAA Girl’s 5A State Championship last February. Her top finish at that meet came in the 200 free where she touched 6th in 1:54.54. After altitude adjustment, that time comes out to 1:53.36. She also added a 12th place finish in the 100 free, with an altitude adjusted time of 52.40.

Last season Miami was led in the sprint freestyle events by Nicole Maeir, who was only a freshman with the team. While she led the team with the top times, she opted to compete in them at the Mid-American Conference Championships, instead claiming the conference title in the 500 free and 400 IM. Instead, it was Camila Lins de Mello and Honor Brodie-Foy who finished with the top performances for the Redhawks in the 200 and 100 free, respectively.

While she still has another year of high school to improve on her times, Saldanha already isn’t far off of the times that it took to qualify for the B-final at the 2021 MAC Championships. In the 100 it took a 51.60 to earn a second swim, while the 200 required a 1:52.30.