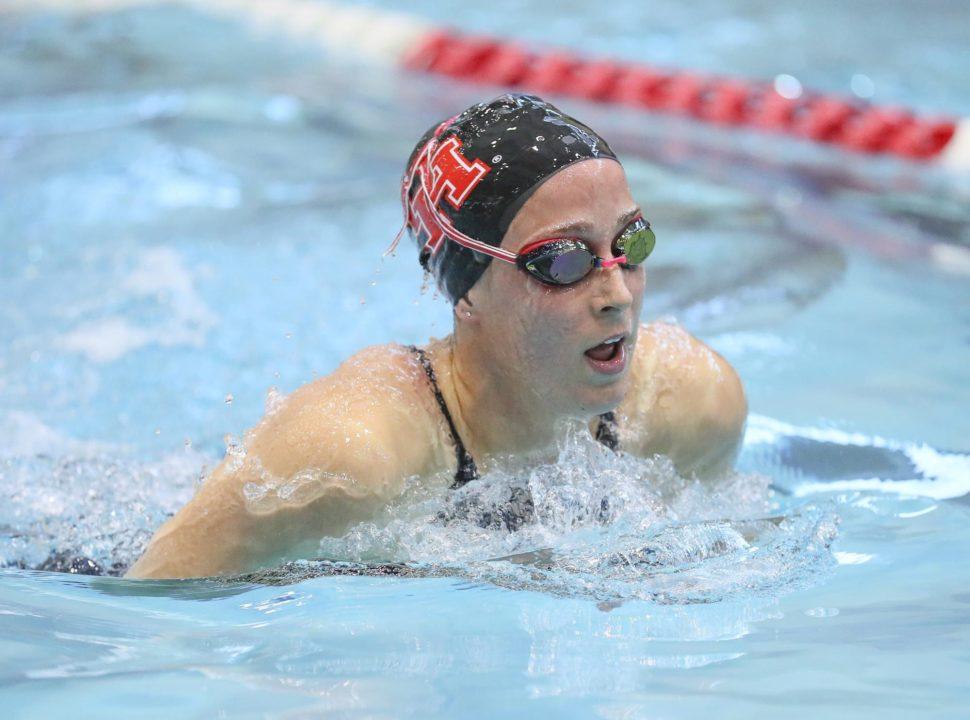 The University of Houston Swimming & Diving team posted 1, 058 points on the final day of action at the Phill Hansel Invitational, for a total of 1, 727 points and its third consecutive win at the Cougars signature home event. Current photo via Stephen Pinchback, Houston Athletics

HOUSTON – The University of Houston Swimming & Diving team posted 1, 058 points on the final day of action at the Phill Hansel Invitational, for a total of 1, 727 points and its third consecutive win at the Cougars signature home event.

The meet was highlighted by 19 NCAA B-Cut times, a multitude of lifetime bests, and the breaking of 40-year old program record. The record fell on the second day of action when Katie Higgins swam a 53.83 in the finals of the 100 Butterfly for second-place in the event. The previous record was once the American record held by former Cougar, Diane Johannigman, and was the oldest record in the Houston record book. 15 of 19 Houston records have been bested since the arrival of Head Coach Ryan Wochomurka and staff.

“It was a great week for our program,” said Wochomurka. “To finish with a school record on the 400 Freestyle Relay was very fun, to see Katie Higgins break that 100 Fly record that had a lot of history for this program, meant a lot too. I think the 200 Medley Relay broke a school record too. I’m very excited about where we are at this point in the season. The challenge for us is to take the things we learned from this meet and apply them as we moved forward into the next phase of the season, which is championships season. This week is an assessment for us, and an opportunity to gauge where we are and how we need to move forward. I’m very proud of how we competed, not even just with this time or that time, but I am proud of this group. They continue to rally around each other, support one another, and compete for one another. That’s what I am most proud of this weekend.”

“The divers had an outstanding weekend,” said Diving Coach Bob Gunter. “The 3-meter contest was an incredible show. They performed far ahead of where they have been at this time of the season in previous years. We still have a few nerves to work through, but overall I couldn’t be more pleased.”

WHAT YOU SHOULD KNOW

HOUSTON — Down but not out, the Rice swim team rallied from fifth place when the day began to finish in second overall to close-out Sunday’s final round of action at the annual Phill Hansel Invitational Meet across town at the University of Houston. After 18 swimming events and three diving events over three full days of competition, Rice vaulted from fifth place into second in the final team standings with 919 points. Meet host Houston won the 12-team competition with a comfortable 1,727 points. New Mexico was third with 891 points, followed by Nevada (863) and Tulane (841.5 points). Colorado State (600), Washington State (595.5), Vanderbilt (467), Air Force (450), Northern Colorado (415), Incarnate Word (274) and North Texas (158) rounded out the team scoring.

The distance specialists likewise came up big in the mile with a host of season-best marks across the board. Hanna Huston was sixth overall (16:42.41), followed by Claire Therien (eighth place, 16:53.51) and Ellery Parish (ninth, 16:54.59).

Freshman Marta Cano-Minarro was sixth overall among a starting field of 77 entries in the 100-freestyle with a collegiate-best 50.26. Parish showed her versatility by placing seventh in the 200-backstroke (1:58.95), but the team wasn’t quite finished.

The foursome of Minarro, Becca Evans, Harper Gillentine and Parish combined to take fourth in the 400-freestyle relay (3:24.45), finishing just ahead of New Mexico (3:24.63) in the final event of the meet and hold on to second place.

The Rice swim team is next in action on December 1 as part of a SEC double-dual meet. The Owls compete against Texas A&M and Vanderbilt before breaking for the University’s final exams period.

HOUSTON, Texas— The University of New Mexico women’s swimming and diving team came out in third place after the three-day Phil Hansel Invitational with a total of 891 points. Senior Adriana Palomino set a new UNM record in two events this weekend. UNM also had five Lobos finish in the top five.

Another notable performance on the day was by the 400-yard freestyle relay team, comprised of Palomino, junior Breanna Wiercinski, sophomore Klara Farkas and freshman Hedda Øristland. The squad touched the wall at 3:24.63 to place fifth.

The Lobos will return to the pool on December 1 for a Tri-Meet at Air Force.