Hoosiers Get Verbal from Lilly King, NAG Recordholder and Top Breaststroker in Class 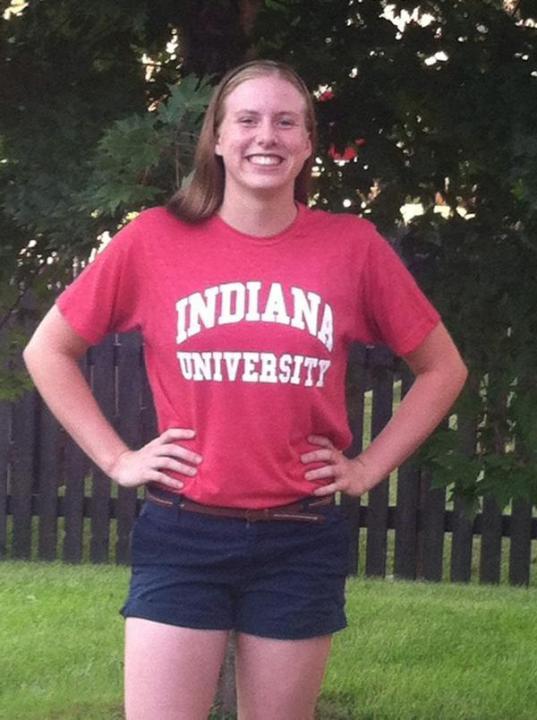 Lilly King will stay in-state next year with her verbal commitment to the Indiana Hoosiers.

Indiana University women’s swimming and diving team scored a huge victory when Lilly King, who swims for Newburgh Sea Creatures, gave them her verbal commitment today. Keeping King in-state is a major coup for the Hoosiers, as she is a highly sought-after breaststroker.

The Francis Joseph Reitze High School senior from Evansville, Indiana broke the 15-16 national age group record -as well as the meet record- going 59.67 in the 100y breast at Winter Juniors in December 2013. More recently, she won the 100m breast at Junior Pan Pacs with a meet record of 1:07.98. Her top times are:

King will be an immediate impact player for the Hoosiers. Indiana placed only one breaststroker in the top 24 for both the 100 and 200 events at B1G Championships this year, and that was a senior who has since graduated. King’s 59-mid would have been the second-fastest time out of prelims in the 100, and her 2:11 would have been the fourth-fastest 200 in prelims.

In addition to her potential to score in the A finals in the 100/200 breast as a freshman, King’s current 200 IM time would have landed her in the 2014 B final.

She has spent the last three years battling a top-two breaststroker in the high school class of 2014 Bethany Galat in the state of Indiana, and King now should have that stage to herself as a senior. She’ll be chasing the 59.66 that Galat swam last year as the State Record – a race in which King was also under the old record, but came in 2nd place.

Indiana finished second to Minnesota at 2014 Big Ten Championships. Lilly King will be a welcomed addition to the 2015-16 roster as she will fill a much-needed slot in the Hoosiers’ lineup.

LOL to all the negative remarks out there. Now she shines at the 2016 Olympics — gold medals. Can’t do ANY better than that.

Some off the comments ring true that many swimmers have always looked at the same schools. When it was said there are other places it is so true. Two years ago when asked were do I think that Missy should look and I said Western Kentucky or Texas A&M for example. It just seems to be part of human nature. In all clubs and colleges with success we tend not look at those who went there looking for the magic wand and it doesn’t work for them but we never hear of them. How many of the Top group at NBAC grew up in the program. It is just they way it is when people go to the same places.… Read more »

I don’t understand why everyone thinks that Cal, Stanford, and Georgia are somehow entitled to every elite swimmer in the country. If a kid lives in the Midwest, maybe he or she doesn’t want to go to school 2000 miles from home. Georgia’s coaching situation is unstable…maybe a kid doesn’t want to risk the next four years on an unknown. Perhaps the experts on this board didn’t think of those things. Looking forward to four (and more) years of excellence from Lilly King!

It is great to see top tier swimmers committing to a program outside of the top 5. College swimming is an amazing sport but one thing that gets really boring for me is that the same 3-4 teams compete for the title every year. Last year was exciting when teams on the men’s side such as NC State, Alabama and Indiana showed real promise and took away valuable points from the top 5 teams.

Some of the comments on here are too biased. To say IU is a poor team is just wrong. They had their flaws in the past with sprinting, but this year they have two extremely qualified coaches to turn that around. Additionally, Lilly is a breaststroker;… Read more »

First and foremost, congrats to Lilly,her family, her coaches, and IU. Hope she does great things there.

Seems like the only recruits who fare well here are low profile recruits who commit to low profile schools. If they get any comments, it’s from their grandparents, childhood friends, age group coach, or first grade teacher. Seems crazy to criticize a 17 year old for choosing somewhere that best fits their athletic, academic, family, and personal needs. An elite recruit like Lilly who commits early isn’t doing so out of desperation and she wouldn’t share the news via social media if she wasn’t pleased, proud, and excited about her decision.

So tired of hearing how any swimmer that doesn’t pick Cal, Stanford or Georgia has made a mistake. Plenty of good programs there, on the verge of being great. Last year at NCAAs even with all of the amazing backstroke talent at Cal,, Brooklyn Snodgrass won the 200 Back, and she swims for Indiana. Cody Miller won the 100 Breast at Nationals this summer, also swimming with Indiana. With the great high school swimmers coming up in the state, why not stay.

Good for you for making your own choices and not listening to all the hype. Nice to see someone show some loyalty to where they come from for a change. Good Luck!

This comment section can get very ignorant when discussing the wants/needs of 17/18 y.o.’s. It seems as though Indiana has stepped their game up considerably in each year under the Looze era. There seems to be a very capable staff in Bloomington, which makes me question why so many people seem to have problems with this decision.

Either way, if the young lady views this as the best place for her, who are any of us to question that? Best of luck, Lilly. All of us swim fans will be excited to watch your growth in the B1G.