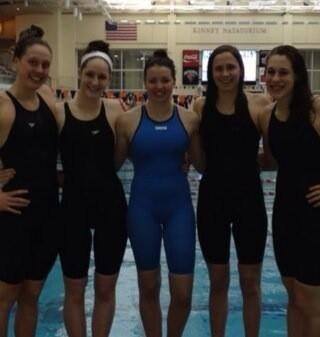 The Hershey High School girls won their second-straight Pennsylvania High School State Championship this past weekend by a significant margin, taking 292 points to the 165-point total of their next-closest competitors from North Allegheny.

That final score, though, doesn’t tell the full story of a very strong Pennsylvania High School swimming scene. Hershey got just two individual victories, but added to that a sweep of the three relays for this runaway victory. This was a deep team that qualified 9 swimmers for the state meet; so deep were they, in fact, that even had they DQ’ed all of their relays, they still could have won the overall team championship.

Photo thanks to Greg Raab

Things got underway in the 200 medley relay with a winning time of 1:44.22, with the foursome of Ari Waitkavicz, Carly Deliberty, Gabi Broschard, and freshman Collette Robinson just out-touching the North Allegheny relay by a narrow .03 seconds. Both teams were under the old State Record.

Every leg on the Hershey relay was solid; but it was the 28.15 breaststroke from the senior Deliberty that was a difference-maker for this group. She dove in with a big deficit after North Allegheny sophomore Jacquelyn Du split an impressive 25.6 leading them off. She will head to Towson next season and join a very young breaststroke group where she’ll battle with Jenna Campbell for the spot on the Tigers’ A-medley relay.

That swim set a tone for the meet; they didn’t have to use junior Meaghan Raab, arguably the team’s best swimmer and certainly their top freestyler, to get the win. That meant they could save her for the other two relays.

In the 200 free relay, Raab split a 22.90 on the 2nd leg and Madelyn Veith anchored in 22.52 as they took a much-more-comfortable win in 1:33.48. That’s a second State Record for them. That relay included Raab, Robinson, Vivi Tafuto, Veith: almost the exact foursome that a young team last year used in this same relay. DeLiberty swam in the prelim of the relay (she used three relay swims and only one individual at this meet). That shows the depth that this team has. With only Deliberty graduating from that group (and none from their finals quartet) there is a repeat and more State Records in Hershey’s future. North Penn took 2nd in 1:34.19 with three splits of 23.4 or better.

Individually, the stars of the meet were Raab, just a junior, plus seniors Leah Smith from Oakland Catholic in Pittsburgh and Emily Cameron from Warwick just to the north of Lancaster. For Smith, this was a triumphant return to high school swimming after sitting out last season’s meet.

Smith first won the 200 freestyle in 1:45.52 to upset the defending champ and State Record holder Raab, who was 2nd in 1:46.28. It looked early in this race like Raab might run away with the crown; she was out nearly a second better than she was on the first 100 yards at last year’s meet. It seems as though she might’ve taken her pace too hard too early: a dangerous game with the distance swimmer Smith lurking. Leah Smith came from over a second behind in the final 50 yards for the victory.

That speed from Raab served her quite well, atlernatively, in the 100 free, where she swam a 49.12. That race did defend her State title; though it put her just off of her record from last season. Unionville senior Macken Hornibrook took 2nd in 50.53 and North Penn’s Kosten was 3rd in 50.65.

Shortly after Smith’s win in the 200 free, Georgia-bound Emily Cameron won the 200 IM in 2:00.62. She’s really used this Pennsylvania State Championship meet to show off her versatility. She won this event as a sophomore (in a crushing State Record of 1:57.7), then last year opted for the 50 freestyle instead (where she also broke the State Record). This year, seemingly not on a full taper, she was back to the IM.

Pine Richland’s Kristen Murslack took 2nd in 2:01.53 to place as the runner-up for the 2nd-straight year. That was a bit slower than she’s been in past years as well, but given that she outsplit Cameron on the breaststroke, this is still a good swim. Hershey, showing off their depth once again, was the only school with two scorers in this event: Tafuto was 6th in a 2:06.5, and Gabi Broschard was 11th in 2:08.0.

Photo of the Hershey State Championship team thanks to Greg Raab.

Smith and Cameron would each win a second individual event later in the meet. Smith topped the 500 free in 3:46.41 to break her own State Record by more than three seconds. That’s a personal best for her, knocking half-a-second from her third-place performance at Winter Nationals. Smith is headed to Virginia next season, and that time is already faster than anybody in a deep Cavalier distance group has been this season.

Cameron finished her meet shy of her State Record in the 100 breaststroke, swimming a 1:02.15. Cameron is this senior class’ top breaststroke recruit nation-wide, though just like her 200 IM this swim made it clear she wasn’t tapered for this meet. Murslack was again in 2nd place with a 1:02.84.

Much as she did last year, she took the State Record down first in prelims (53.83) and then again in finals (53.70), holding off North Allegheny’s Jacquelyn Du (54.91) for the victory. Leander will head to Tennessee next season: a program that ended this season with a whole lot more backstroke depth than it began with in the fall.

Leander also took 3rd in the 100 fly with a 54.89. Ahead of her were Northeastern junior Nikki Price in 54.11 and Unionville’s Hornibrook in 54.73. Price was the only underclassman in the top 5 of this race, and is a strong pick to repeat at next year’s meet. She took on high school swimming for the first time this year, and became the school’s first girls’ swimming state champion. Despite the six-tenths of a second margin of victory – this was not an easy win. Price actually trailed going into the final turn.

But the team story was all about Hershey. Junior Madelyn Veith took the win in the 50 in 23.15, followed closely by Wilson junior Alexandra Rockett (the best sprinter name in swimming history) in 23.25. Hershey’s Robinson took 8th in this race in 23.86, and combined with Raab’s title in the 100 free, it’s no surprise that Hershey swept the sprint-focused relays.

The Hershey girls don’t go totally untouched in terms of graduations; they lose half of their 200 medley relay, for example. But their main contenders are hit even harder, and the nucleus of speed will all be back for another season. Not only are they the favorites to repeat next season, they are favorites to once again sweep all three relays. Pennsylvania, though, as of late has had a habit of swimmers coming-and-going from the high school side of the sport at random, so there’s no telling how this landscape could change next season.