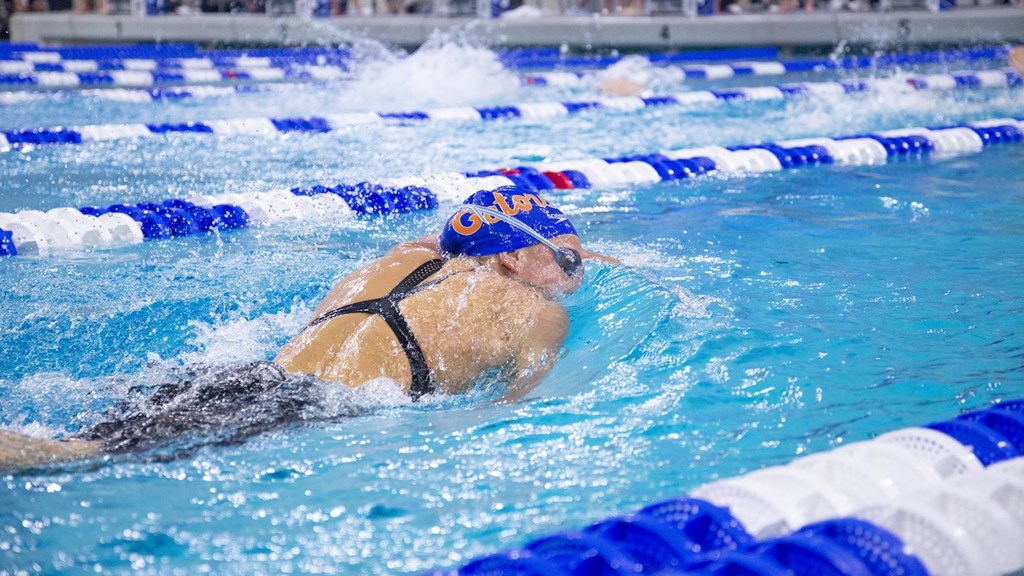 On the same weekend that their top ten football teams are doing battle on the gridiron, SEC rivals Florida and Georgia squared off in the pool at Gainesville. While the women’s meet was marked by a bevy of close races, the Gators ultimately prevailed over the Bulldogs, 164.5 to 135.5.

Florida swept both the 200 medley relay (1:40.26) and the 400 free relay (3:19.61), to bookend the afternoon and tallied five individual victories by five different swimmers.

Leah Braswell kicked off the individual events with a 9:45.74 win in the 1000 free. She won by over five seconds and now has the 2nd-fastest time in the country, pending other results from this weekend.

GAINESVILLE, Fla. – The No. 1 University of Florida (6-0) women’s swimming and diving team came out on top over the No. 12 Georgia with a 164.5-135.5 win in their home opener inside the Stephen C. O’Connell Center Natatorium.

Florida produced an all-around team effort, winning seven individual events and a pair of relays en route to their sixth-straight victory to start off the season. This marks the best dual start to a campaign since the 2002-03 Gators that got off to an 9-0 start.

The Gators come away with two wins against Georgia today.

swimming and diving is now a combined 11-1 on the season. #GoGators#WeChomp

Leah Braswell started the Gators off on the right note in the first individual event, winning the 1,000 free in a new personal-best time of 9:45.74, which stands as the second-fastest time in the country this season. She set a previous top swim of 9:49.24 against Minnesota on Oct. 11.

Kelly Fertel notched a pair of B-cuts in the 200 IM and the 200 breast as she finished runner-up in three total events in the dual.

Elizabeth Perez led the way on the board for the Gators, picking up her first pair of victories on the year. On the 1-meter, she tallied a score of 286.28 and a score of 299.25 on the 3-meter.

With the win, the Gators have now won two duals in a row against the Bulldogs for the first time since 1996-97 when UF had won 12 straight duals over the Bulldogs.

This year’s meeting marked the eighteenth-consecutive year the two programs squared off in a dual meet.

The Gators continued to best their opponent in relays, picking up wins in both events on the day.

Ball, Pearl, Talia Bates and Garofalo took home the first event of the dual as the 200 medley relay team combined for a swim of 1:40.26, besting the Bulldog’s top relay by .95 seconds.

In the 400 free relay, the Florida’s fastest team of Dressel, Bates, Golding and Garofalo picked up the win with a combined time of 3:19.61, which was three full seconds faster than the runner-up time posted by the Bulldogs.

Head coach Jeff Poppell – “It was an outstanding team effort today against a strong Georgia team. We received contributions from so many different individuals on our roster from freshmen to seniors, swimmers and divers. I’m really happy for our seniors who were able to enjoy back to back wins against Georgia for the first time since 1997. Their leadership this season has been nothing short of superb.”

Head Diving coach Bryan Gillooly–  “ On the women’s side, we were going into the meet a little short-handed because of some injuries. I was pleased to see how they responded. They really rose to the occasion and did what they need to do for the team. Elizabeth (Perez) getting a couple wins and Abby (Howell) making her zone score was great to see.”

The Gators will look to stay undefeated when they host Florida State in the Fresh From Florida Sunshine Showdown next Friday, Nov. 8 at 2:00 p.m. The dual will serve as the team’s final dual competition of 2019.

Florida will finish off 2019 with a pair of invitationals as the swimmers will travel to Atlanta in the Georgia Tech Invitational on Nov. 22-24. The divers will then travel to Auburn to compete in the Auburn Diving Invite on Dec. 17-19.

GAINESVILLE, Fla. – Despite 14 individual wins, University of Georgia swimming and diving was unable to top rival Florida as the Gators swept the Bulldogs Friday afternoon at the Stephen C. O’Connell Center. The Gator men won, 163-118, while the Lady Bulldogs fell in a 164.5-135.5 result.

For the Lady Bulldogs (3-1, 1-1 SEC), freshman Zoie Hartman continued the phenomenal opening to her career, winning three races with B-cut times in each. For the third time this season, Hartman swept the breaststroke events, taking the 100 with a season-best time of 1:00.28 before narrowly grabbing the 200 with a 2:12.77. In the closing 200 IM, she once again prevailed in a nail-biter, using a late surge to win with a time of 1:58.80.

Junior Courtney Harnish also performed well for Georgia, winning in the 200 (B-cut time of 1:46.80) and the 500 freestyle (4:49.54) for the fourth time in as many meets this year. Sophomore Dakota Lutheralso remained unbeaten in the 200 butterfly with a B-cut time of 1:57.59, followed closely behind by fellow sophomore Callie Dickinson. Senior Veronica Burchill placed first in the 100 freestyle (49.65) for the third time this year, while junior Gabi Fa’amausili tied for the win in the 50 free. At the well, senior McKensi Austin scored in both events, posting a second-place 291.75 in the 3-meter along with a third-place finish in the 1-meter.

On the men’s side, the Bulldogs (3-1, 1-1 SEC) were headlined by sophomore Andrew Abruzzo’stremendous outing. Abruzzo broke his personal best time from last week in the 1000 freestyle, turning in the eighth-best mark in school history at 8:59.25. After falling in the 500 freestyle by 0.8 seconds, he used a 25.34 split in the final lap to win the 200 IM with a time of 1:48.92. In the 500, Abruzzo was joined by teammates Greg Reed and Joshua Fulcher in a nine-point race.

Harry Homans, last week’s SEC Freshman of the Week, again impressed with his first collegiate win in the 200 butterfly, tallying a time of 1:46.71. Homans later scored for the Dawgs with a runner-up finish in the 200 backstroke and fourth-place time in the 200 IM. In diving, junior Zachary Allen compiled a fantastic meet, sweeping both springboard events with a qualifying mark of 361.65 in the 3-meter, followed by a decisive 298.58 in the 1-meter.

After three meets over an eight-day span, Georgia will take a deserved break from competition over the next two weeks. The Bulldogs will return to the water on Thursday, Nov. 21 for the three-day Tennessee Invitational in Knoxville.