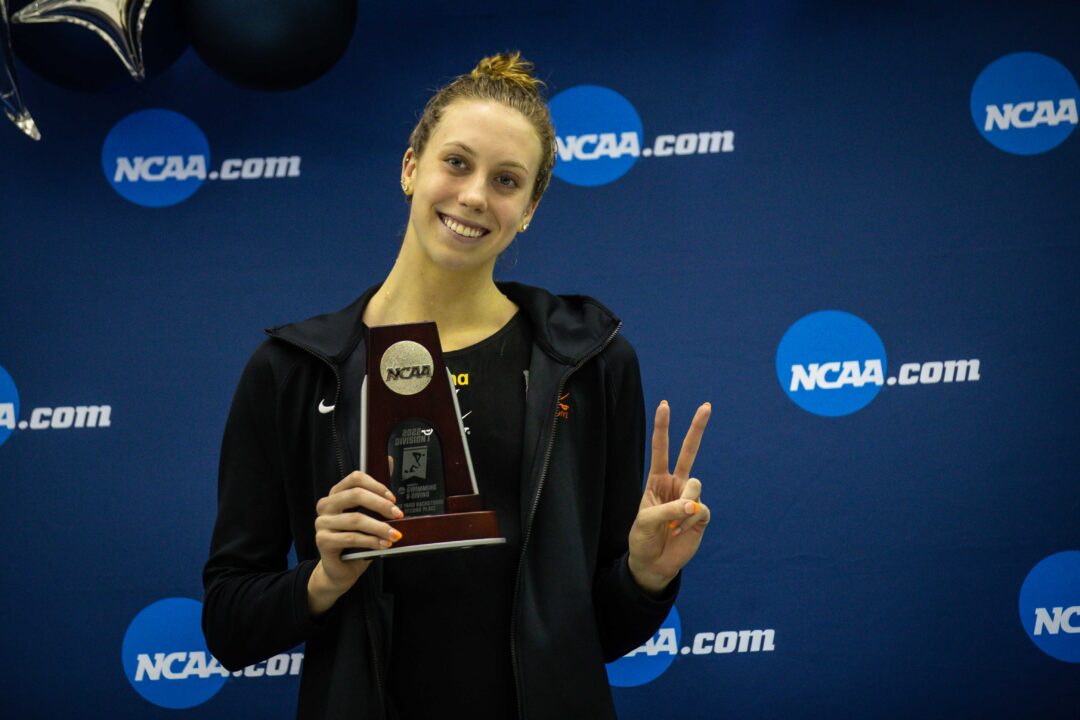 Rising Virginia sophomore Gretchen Walsh swam season-best times in the 100 freestyle and 100 backstroke this past weekend down in Greensboro. Archive photo via Jack Spitser/Spitser Photography

Some of the University of Virginia’s swimmers traveled down to North Carolina to compete in a club swimming meet, also clashing with some of the best club swimmers out there.

Highlighting the women’s side of the meet was rising Virginia sophomore Gretchen Walsh. Walsh competed in what can be considered her “on” events as well as a few extra events she might not normally fit in a high-level meet. Walsh swam a 25.31 50 freestyle which was slightly off of her personal best of 24.53 which she swam at US International Team Trials in April 2022. Walsh finished third at Trials, just 0.01 off of making the Worlds team.

Another event featuring another Virginia rising sophomore was the 100 backstroke. Walsh won the 100 backstroke in a time of 1:00.64 which was a season best as she swam a 1:01.25 at International Team Trials. This weekend’s time was also just off of her best time of 1:00.26 which is swim August 2019. Finishing second behind Walsh was fellow Virginia swimmer Reilly Tiltmann. Tiltmann swam a time of 1:01.31. That time was just off of what Tiltmann swam at International Team Trials as she swam a best time of 1:00.87 there. Notably, Walsh and Tiltmann are both members of the Virginia 400 freestyle relay that set an American Record at NCAAs in March.

Highlighting the men’s side of the meet was rising teenager Thomas Heilman of Cavalier Aquatics. Heilman swam a 23.39 50 freestyle leading off his relay, although the 50 freestyle is not one of Heilman’s “on” events. He also competed in the 100 and 200 butterflys. He swam a time of 54.24 in the 100 fly which is slightly off of his 52.87 which he swam in prelims of International Team Trials. He also went a 2:02.40 in the 200 fly. His best time stands at a 1:58.01 which he swam in prelims back in April.

Aikins continued to show his backstroke strength swimming a 55.62 in the 100 backstroke. He swam a 53.95 to finish 6th at International Team Trials in April. He also swam a 2:01.92 in the 200 backstroke. In April, he swam a 1:56.29 to finish third in the event missing the Worlds team by less than a seconds.

Several races were without a suit too (most prelim swims and Sat. finals I believe)