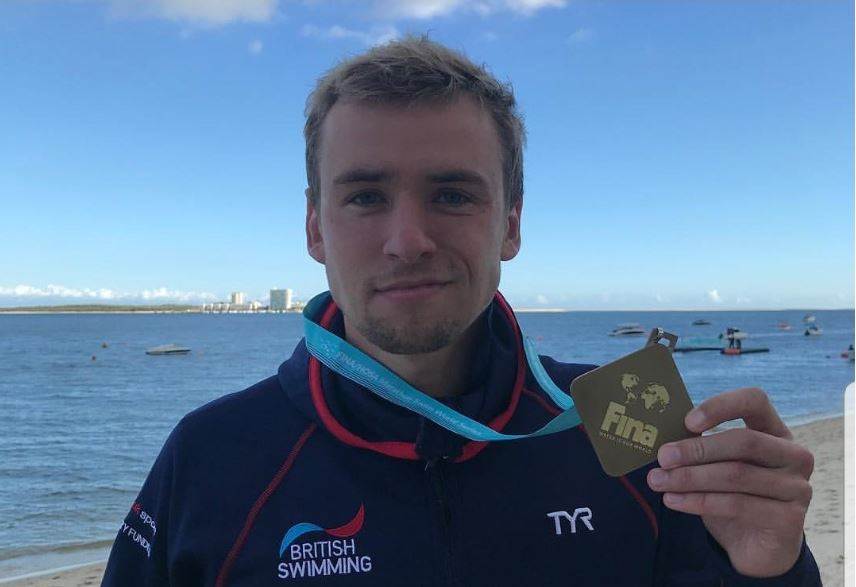 Switching to marathon swimming in 2013, Burnell secured a spot on the 2016 Olympic team, and in preparation for Rio, won silver at the 2016 European Champs. Archive photo via British Swimming

A blend of new and experienced faces will compete for British Swimming’s marathon swimming team at the European Aquatics Championships later this month.

Peaty discusses the devastation of missing the 100 breast podium and bouncing back to win the only title that had eluded him his entire career.

Jack Burnell is calling time on a swimming career that has brought European and World Cup medals – and a rise to second in the marathon swimming world.

Burnell made the switch to marathon swimming ahead of the 2013 season, finishing only 15 seconds off the winner in the Men’s 10km race on his World Championship debut, before a breakthrough 2014.

As well as recording a pair of top-10 finishes at the European Championships in Berlin that year, he secured two World Cup golds – in Hungary and Mexico – as well as a silver at the event in Abu Dhabi to outline the consistent quality he would bring to the British marathon swimming squad for eight years.

The Scunthorpe-born athlete continued to progress from there, securing a spot at Rio 2016 with another strong placing at the 2015 World Championships – and he prepared for that Olympic debut by taking silver at the Europeans in 2016, touching less than a second off home champion Ferry Weertman at the end of a race spanning more than one hour and 55 minutes.

He would go on to appear at an impressive four successive World Championships, with the 2017 edition seeing him finish an agonising fourth, before he went on to clinch another World Cup victory, this time in Abu Dhabi, a few months later.

Jack’s last outing in British colours was at the recent FINA World Cup event in Doha – and he says now is the right time to step away from competing at the highest level of the sport.

“It’s not a decision that I’ve come to lightly, but it’s one that, over the last year or so, has been in the wings, waiting. From a physical and mental point of view, it’s definitely the best decision for me at this time,” said the 27-year-old.

“Everyone – my friends, my partner, my family, training partners, everyone at the National Centre – has been so supportive. I couldn’t be more thankful to them for that, because that was a huge weight off my shoulders.

“I’d thought a lot of people would be asking, ‘is this the right time?’ with the Olympics around the corner. But that didn’t happen.

“They know me best and they know that I swim for one reason and one reason only – and that is to be the best in the world. My body is not at a stage right now where it would let me do that.

“I felt I wanted to end my career on my terms. I just thought of sitting on the side of the road in Tokyo, having come 10th or 12th – I don’t want to sign my career off in that way, having had some amazing highs in my career, being ranked second in the world, winning World Cup medals, things like that. I wanted to sign it off in my way and on my own terms.”

A young Jack began swimming at hometown club Scunthorpe Anchor before a move to Lincoln Vulcans. He credits former coach Fred Furniss with having a pivotal impact on a career trajectory that has taken in the biggest competitions in the sport, while Kevin Renshaw and David Hemmings have played huge roles more recently at Loughborough.  So what are the standout highlights for Burnell from his time competing?

“My career has just been an absolute rollercoaster of emotions. We’ve had the ups, like being ranked second in the world, World Cup medals, European medals. They are all great, and at the time, you kind of gloss over them. Usually, it’s the lows that stick out to you at the time,” he explained.

“Funnily enough, my career highlight and my career lowlight were at the same time, in Rio. Pulling on the Team GB jersey made me feel complete as a swimmer. But then what happened in terms of the result (Jack was disqualified at the end of a race in which he was in genuine contention for a medal) was probably the lowest moment of my career. I’ve never just sat and stared at the floor of my hotel room longer than I did after that race, just not knowing what had gone on.

“But again, those moments are all part of the journey and the experience I can take from what I’ve done, which I can put into the next chapter of my life. Had I not experienced those things, I wouldn’t be as well equipped.”

Jack – who works in performance mindset coaching – says he is now entering a period of reflection before the next step in his career. But as he prepares to hang up his goggles and marathon swimming suit for good, he is intent on letting everyone who has played a part in his journey know how grateful he is for their input.

“I really want it to be known that I was at the sharp end of the sword, I was in there, doing all the training – but there is no way on this planet that I’d be where I am today had it not been for my coaching staff, support staff, friends, family,” he added.

“You have your immediate support staff, your coaches or team leaders, but it’s even down to the people in the office that book the flights, the people that sort out all the forms, the media guys, everyone. They are all cogs in this big machine that creates a hell of a life for us athletes. It’s this time now to reflect and just say, ‘look guys, I cannot thank you enough’.

“The support has been unbelievable to get to where I am. Huge thanks goes out to everyone who has supported me from day one, really.”

On Jack’s retirement, British Swimming National Performance Director Chris Spice said: “Jack has been a valuable member of British Swimming squads for the best part of a decade now, and he has been a senior figure among the marathon swimming cohort for a good time too.

“He moves on to the next chapter with European and World Cup medals under his belt, as well as the honour of representing his country on the biggest sporting stage of them all at Rio 2016.

“Having been at the Loughborough National Centre for so long, I know he will be missed by his fellow athletes, coaches and support staff there and I’m sure it will take a little while for all at that Centre to get used to not having him around in training, in the gym and on deck.

“We wish him all the best for the future and will support him through this transition period. I look forward to seeing what he goes on to achieve in the future.”

Loughborough National Centre Coach David Hemmings added: “Jack has had a great career in marathon swimming. He has achieved so much, representing Great Britain at all major Championships and competing at the very highest level. He should be extremely proud of his accomplishments.

“It has obviously been a difficult decision for Jack to make, as swimming has been the main focus of his life for so long. He has also been a key member of our centre – a group where there is a great sense of camaraderie and belonging. But his decision comes at a time where he is ready for life’s next challenge, and I have no doubt the passion and competitiveness he has shown in his swimming career will serve him well in his next chapter. Well done, Jack.”