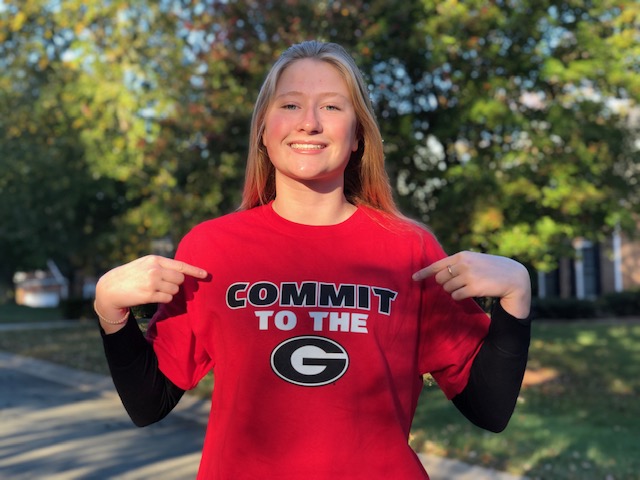 Sikes, a high school junior, would rank 2nd on Georgia's team this season in the 50 yard free after a new best time two weeks ago in Greenville.

Cal commit Lucca Battaglini just-missed a new lifetime best in the 50 free and Georgia commit Katherine Sikes crushed her own personal best in the same event two weeks ago at the East Carolina Aquatics-hosted Southeastern Classic.

Battaglini, 17, trains with his dad Claudio Battaglini out of ECA’s Chapel Hill site. He won the boys’ 50 free at the meet in 20.03. That swim was .07 seconds behind his lifetime best in the event, which was set at last year’s Winter Junior East Championships.

His swim is the fastest flat-start in the country so far this season in the 50 free. The only 18 & under who has been better this year is NC State freshman Quintin McCarty.

While none of those swims were best times for him, they were all substantially faster than he swam in his previous meet in October, where he was 47.3/1:45.8 in the freestyles and 51.3 in the 100 fly.

Battaglini is scheduled to join the vaunted sprint crew at Cal next fall. The Golden Bears have ended the year with the fastest 50 freestyler in the NCAA every season since Caeleb Dressel graduated in 2018.

In the girls’ race, Georgia commit Katie Sikes took a huge leap forward with two new personal bests. The high school junior swam 22.52 in the 50 free and 56.00 in the 100 fly.

The drop, especially in the 50 free, is big for Sikes, given that the rest of her times indicated that she wasn’t on a full taper for this one: she was 50.32 in the 100 free, about four-tenths shy of her best.

While Sikes is still a season-and-a-half away from her first meet for the Bulldogs, her addition will be a welcome sight in Athens. The team only has one 50 freestyler who has been better than 22.8 this year, sophomore Eboni McCarty at 21.89, and with limited help coming in for 2023. Sikes’ new best times came just a couple of weeks after making her commitment to Georgia.

16-year-old Emily Armen finished 2nd in 23.04, which missed her best time by .08 seconds. Another ECA junior, Armen is committed to Tennessee. While Armen is primarily a sprint freestyler, she flexed some range on the weekend: she swam 4:55.12 to win the 500 free, dropping more than 15 seconds off her personal best, and also added a best time of 57.09 in the 100 back.

So tell me if I’m wrong here, but Claudio, (Lucca’s dad?) trains Kathrine and lucca but not the others…? Whatever claudio is doing is working, I don’t see why you wouldn’t just combine into one whole group if his girl is the one taking the 50 free W.

Because chapel hill and Greenville are almost two hours apart driving distance. So they represent ECA in name only. Probably some inter-club politics that led to this affiliation with ECA rather than one of the triangle teams or their own club